A Documentary of the Extreme Mustang Makeover 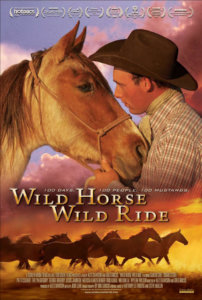 Each year thousands of wild horses are rounded up and removed from public lands by the U.S. Government. All will need permanent homes. None has ever been touched by a human hand. Wild Horse, Wild Ride tells the story of the Extreme Mustang Makeover Challenge, an annual contest that dares 100 people to each tame a totally wild mustang in order to get it adopted into a better life. Stunning and poignant, Alex Dawson and Greg Gricus’ debut feature documentary chronicles a handful of unforgettable characters from their first uneasy meeting with their horses and over three months as they attempt to transform the animals from scared strangers to the closest of companions. Eventually all will converge in Fort Worth, Texas, to compete against each other and offer the horses up for adoption at a public auction. Hailed by The Hollywood Reporter as a “crowd-pleaser with a big heart,” the film traverses across the United States, from the rolling hills of New Hampshire, to the Navajo Nation, to the heart of cowboy country. The film captures a journey that is at times harrowing, humorous, heartwarming and heartbreaking as these wild spirits- both human and horse- embark on the ride of their lives. To learn more about this film visit www.wildhorsewildride.com.

Editor’s Note: This film had me in tears more than once. It is a must-see and brought to mind a small gelding named Cody that I once helped transition into a new, domestic life. The film definitely made me want to take that journey again!