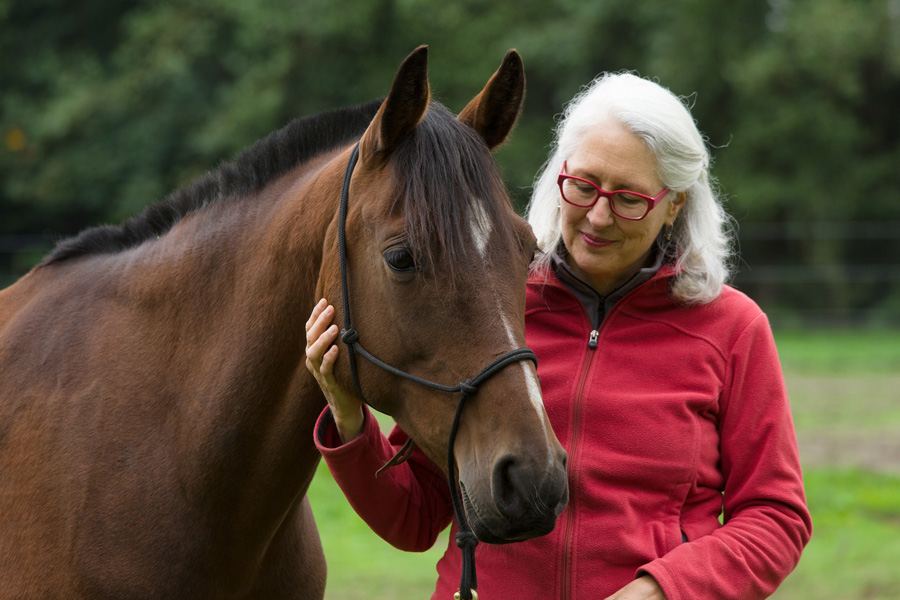 Do you know what holds the body up? Is it A—the skeleton; B—muscles; C—connective tissue (fascia); D—all of them? If you answered C for connective tissue or fascia, you were correct. Most of us were taught that muscles and bones hold up our bodies, but now we know differently. If you took everything out of your body (or your horse’s body) except fascia, it would still look like you. That’s the significance of this tissue. As part of our culture’s body-as-machine mindset, fascia has been largely ignored, literally cut away in order to see the “important stuff” during dissection. More recently, fascia has been the subject of much research. Now we know it is the important stuff.

I believe that fascia is an important topic for both horses and riders. When we understand how fascia works and how to care for it, we can be healthier and enjoy activities with our beloved horses for longer.

What is Fascia and What Does it Do?

Fascia is a system of soft connective tissue surrounding every muscle, tendon, ligament and bone throughout the body. Fascia keeps the muscles, tendons, and ligaments gliding smoothly over one another. You see fascia when you peel the skin from uncooked chicken—it’s the white filmy layer between the skin and the meat.

Injuries, repetitive stress and gravity affect the health of fascia, as does dehydration and emotional trauma. Over time, fascia develops stuck places that restrict its flexibility. Fascia does this to protect an injury while it heals—adhesions, scar tissue, etc. The trouble is that once it’s healed, the fascia keeps on holding. Holding patterns in the body and compensations in movement develop. It’s harder to bend or canter in one direction, for instance. If you think of fascia as a sweater and a trauma as a big snag, the tight surrounding stitches are like fascia guarding an injury—with corresponding limitations. Bodywork releases the stuck places in fascia like working the snag back into the fabric of the sweater—flexibility returns. It sounds simple, but the results can be profound. I’d like to share the story of a friend’s mare that made remarkable changes primarily through fascial release work.

Whoopi, a lovely ten-year-old Tennessee Walker mare owned by a friend, lived with six other horses and was low in the herd. Between June 2013 and January 2014, I did a total of seven sessions with Whoopi, with most falling between August and October. Whoopi’s history included a trauma at birth when her mother stepped on her back leg and broke it. Though it healed, she had chronic issues with her back and hips, and a lifetime of compensation. She had bucked riders off going up or down hill and dragged both back feet as if disconnected from the rest of her body.

Whoopi accepted her first session well, with many good releases. Yawning, licking and chewing, sighing, stretching and shaking are common outward signs. Afterwards, she had more movement in her back, her strides were longer and she seemed to feel better. The next session, however, she was grumpy. I learned this was often the case around people. Still, she did some very deep processing. When I came back the following week, she was different again. Her confidence improved as her body began to feel better. This time, Whoopi chose to stay in connection with me during the session, engaging with the bodywork, and positioning herself for the most advantage from each stroke. Her releases continued, and now included long twisting stretches of her neck while yawning.

The mare continued to blossom from the bodywork and the attention. Each session, I focused on helping her hindquarters feel connected to the front, especially through her back. My hands found the places needing attention and I worked with the intention that her hindquarters would become fully integrated with the rest of her body, and that she would be comfortable in her body. This wasn’t simply so somebody could ride her.

The chiropractor adjusted Whoopi during the middle of the bodywork series. At the following visit, after all seven sessions, Whoopi had held her adjustment and had integrated her hindquarters with her front end. Wonderful results! More changes were afoot for the mare as my friend was downsizing and moving her herd. Whoopi found her person and acted engaged and patient with their learning. No more ear pinning, grumpiness, or bucking. My friend wrote, “I felt she wanted to help (the person learn) rather than protect herself.”

Whoopi’s healing included the four ways of caring for fascia listed below. She lived on pasture with ready access to water and moved around at will. I provided the bodywork and as she became more comfortable physically, her attitude and behavior shifted accordingly.

How to Care for Fascia

With regular care, your fascia and your horse’s fascia will stay flexible longer. Research has shown that four things contribute to healthy, supple fascia: Hydration – drink (access to) plenty of pure water; Regular, varied movement – non-stressful movement such as walking (being on pasture) helps all mammals cycle energy, toxins, waste products through their body systems; Regular bodywork – get support to keep everything moving, like car maintenance (except car parts don’t heal themselves); Stay flexible – physically as well as mentally, since attitudes play a big role in health. Do stretches on your horse and with your horse. Basically, make friends with your fascia, the responsive, intelligent network everywhere in our bodies. Understanding and caring for it, and your horse’s fascia, will sustain (or restore) flexibility and prolong your ability to pursue the activities you love. We were born to move!

Barbara Breckenfeld practices equine bodywork specifically aimed at releasing fascial restrictions and the resulting compensations in movement. She works with equines of all breeds and disciplines throughout the Puget Sound Region. Learn more at www.movementinbalance.com.

Barbara Breckenfeld of Movement in Balance does equine bodywork/massage and healing in the greater Puget Sound area, as well as offering her popular “Bodywork for Horses” clinics. She is nationally certified by NBCAAM, licensed as a Large Animal Massage Practitioner (LAMP) in Washington State, and an Equine Structural Integration Practitioner certified by the Equine Natural Movement School. Barbara became a horsewoman in 1993 when a handsome dapple-gray won her heart and introduced her to the fundamentals of dressage. Contact Barbara by email barbara@bluehorse.biz, call 425-260-0784, or visitwww.movementinbalance.com.