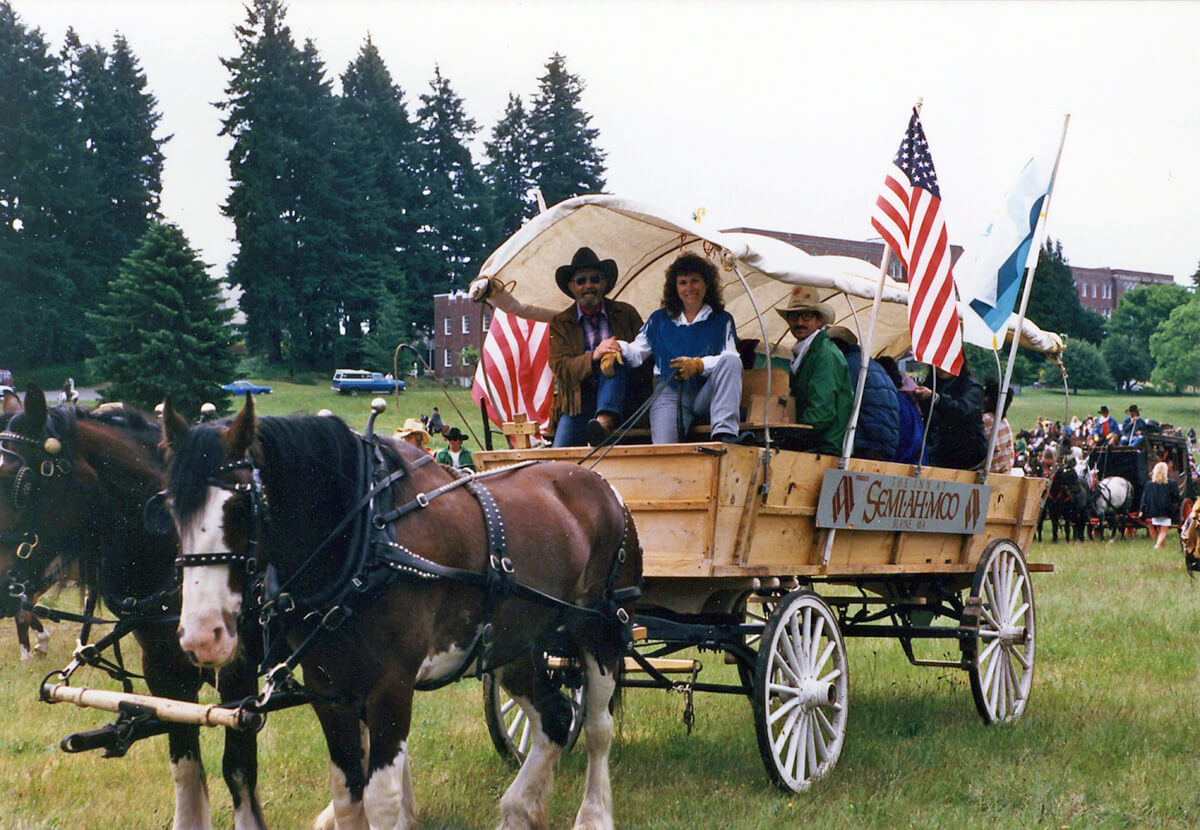 Wagon Train ’89 was one of many great life adventures. It was a celebration of Washington State’s Centennial. Several Wagon trains converged together coming from all over the state. The East train started from Idaho, South Train started in Oregon, West Train started in Ocean Shores, and the Olympic Train started in Forks. I was on the North train starting in Blaine. We ended up at the state capitol in Olympia 3 weeks later. 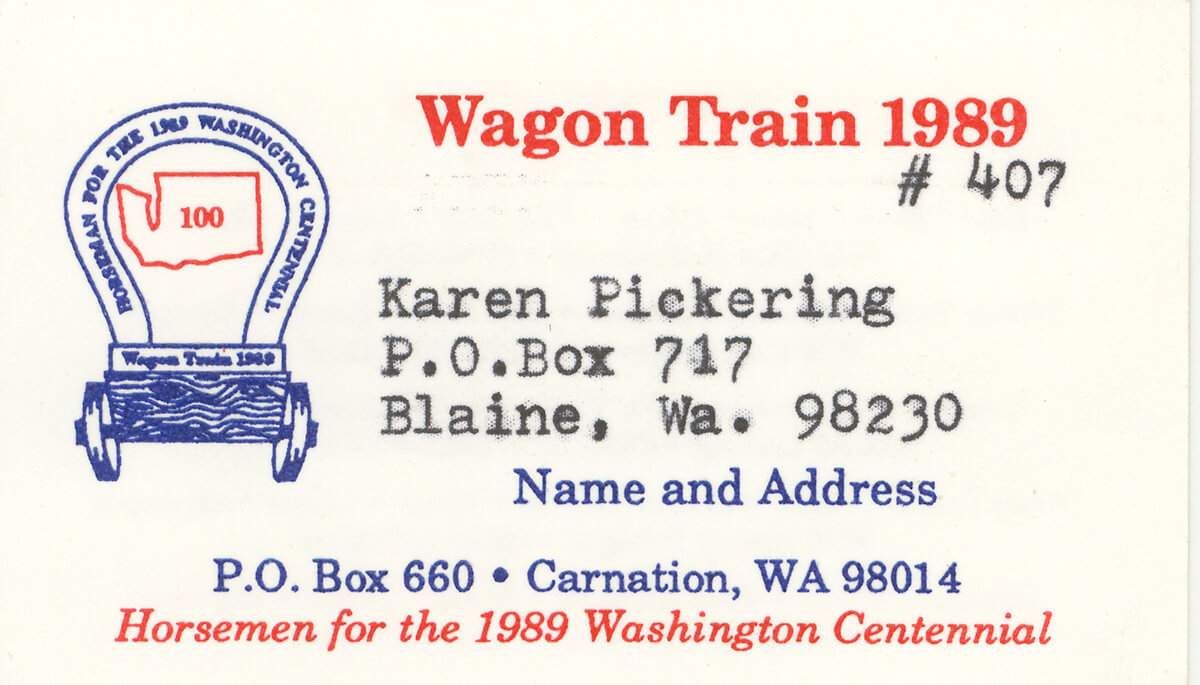 I remember my dad had recently passed away. My best friend Theresa Crume really urged me to come on this trip with her. I was depressed and still numb from losing my Dad but I agreed to go. Weeks of preparation, fund raising, and arranging for time off work, consumed me for quite a while. It was a good distraction from all the sadness. I kept thinking how my Dad would have loved this trip.

I have fond memories of our Wagon Master, Cap Galloway. He and Peggy Rodgers led the way with a beautiful team of Clydesdales. Shorty Bosman, Dan Kramer, Jim McCrea (Canada), Sheriff Bill (Canada) and many other familiar names in our community were there. Cap even married a young couple during the trip. In the evening we sang around the campfire with Jane and Rose playing their guitars, listened to poetry by Hope and made some lifelong friends. The entire trip was memorable.

Each morning T (Theresa) would drive the motorhome and horse trailer to the next stop. We rode about 20 miles per day. On the trip I discovered my horse, Minnie Kitty, didn’t tie. She broke every lead rope I brought and all the ones I borrowed. Don’t know how I could have missed that but I hadn’t owned her for very long so it was certainly an unpleasant discovery. We had brought a portable electric fence so at least we had an option. I also discovered that most of the saddle horses were terrified of the wagons. We had a few wrecks but fortunately no one was hurt too badly.

In preparing for the trip T decided we should sell T-shirts. There was already an official Wagon Train coat but we figured we could make some cash to pay for the trip by selling T-shirts along the way. T found a good deal on the shirts and some clipart of a wagon train. I drew our WA State Map around the clipart and we had shirts designed and ready to sell. I think we made about $1500 on the trip. It helped us pay for fuel, feed for the horses, food and a few items we needed to make the trip. My bosses at the time (C.F. Liebert Customs Broker) sponsored us along with John Hayes who had recently opened “Hayes Import Inspection Service” in Blaine (Now called TC Trading). We had a few other sponsors as well, which made the trip affordable for a couple of working girls. T’s boss at the time (Dennis Brown of Northwest Podiatric Lab in Blaine) loaned us a beautiful motorhome for the trip. We slept really well through the entire trip!

We had many other adventures and mishaps along the way. Crossing the Nisqually River was pretty exciting, especially watching all the wagons cross. Then riding through Fort Lewis and watching our porta potty wagon tip over on the base. Pretty exciting to watch a couple of Hum-V’s show up with ropes to pull it upright again. We were hoping no one was in them at the time. Our portable outhouse was appropriately called “Heartbreak Hotel”.

Life is lived in moments like these so never miss an opportunity for an adventure! For a little girl who dreamed of owning her own horse, this was the adventure of a lifetime!

Note: When I get a chance I will create a Facebook Group for Wagon Train ’89 where we can all share our pictures and swap stories! 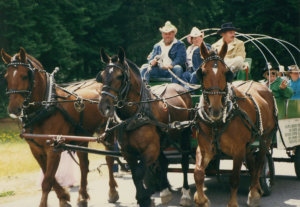