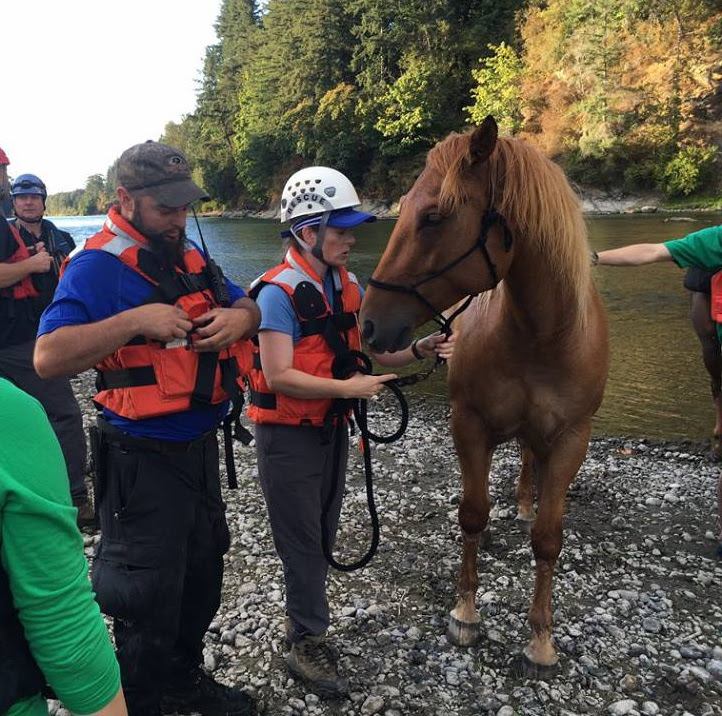 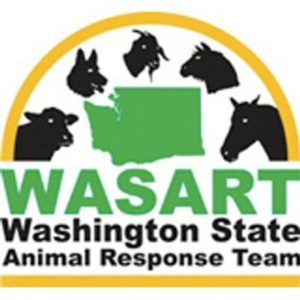 On Monday afternoon we received a call for a horse, Twix, who had spooked and ended up on the far bank of the Snohomish River in the Lord Hill area. He was safe but hemmed in by geography and too afraid of the water to swim back on his own.

We decided the horse was safe enough, and had grass and water available. Attempting a rescue in the dark can introduce unnecessary risks. Making plans and proceeding in the morning would be safer for the horse as well as the responders.

That evening we considered and rejected a number of plans, concluding that the best course was to swim the horse back across the river. Though the river is low, any water rescue can be dangerous. Swift water is not something we are trained in.

Fortunately we have friends at Summit to Sound Search and Rescue in Whatcom County who are. We’ve worked with them a number of times and successfully completed a swift water rescue with them not too long ago. (See WASART News March 2016.) Additionally, a number of their swift water technicians are also horse people. Snohomish County’s Sheriff was kind enough to put in an official request for Summit to Sound and four responders came down that afternoon with a boat and equipment in tow.

We met them at the river, about half a mile up stream from the horse. Joining us was Dr. Dana Bridges Westerman and some friends who also brought boats. We donned Personal Protective Equipment (PPE) and Personal Flotation Devices (PFD), then headed down the river.

Though most of the river was low enough to walk through, there was a channel right in front of the horse that was about ten feet wide and seven feet deep. This was the main feature we needed to get the horse across to get him to safety.

One of our best horse handlers, JC, rigged the horse. He used a Wideman Configuration to distribute weight and not injure the horse, while keeping Twix securely harnessed as he was pulled across.

We attached a water rescue rope to the rigging. The water rescue rope is key here because it’s designed to float and have less drag in the water, where our usual rescue ropes could have bogged down and become a hazard. Dr. Dana put an inner tube around the horse’s neck to give a little extra floatation to the head. She also gave a bit of sedation to help calm the horse.

The rest of the responders took their places on the other end of the rope to pull the horse into the water and through the deeper part. He was able to walk the rest of the way over in the shallow water. Nearby, his owner, her friend, and Twix’s pasture-mates were on hand to call him over and encourage him.

Rigging lead Joe called the pull and we steadily and firmly pulled Twix off his spot by the side of the river, into the water, and then across the river.

The solution worked well and his nose never went under, which could have caused medical issues. We’re really grateful to Summit to Sound for lending us their swift water experts. They are responsible for the rescue going safely and smoothly. We’re also very appreciative of Dr. Dana and her friends from Rotten Chum Guide Service for the operation and use of their boats.