EVENT UP FOR AUCTION to benefit BCHW:
“Come Ride Our Part of the State”

DEADLINE for final bidding is 8:00 P.M. on APRIL 15, 2020.
You do NOT need to be a BCH member to participate in this Auction!!
ALL PROCEEDS WILL GO DIRECTLY TO BCHW TO HELP OFFSET THE LOSS OF THE CANCELLED RENDEZVOUS.
ALL BIDS MUST BE MADE IN COMMENT SECTION ON THIS POST ON SKAGIT CHAPTER’S FACEBOOK PAGE
Questions may also be made in the Comments :)
www.facebook.com/groups/BCHWSkagitChapter

Skagit Chapter intended to donate this Event as a Silent Auction Item at the BCHW Rendezvous. In the spirit of making the most out of the unfortunate cancellation of the Rendezvous, Skagit has decided to OFFER UP THIS EVENT FOR AUCTION on Skagit’s FaceBook page and it will be awarded to the highest bidder upon receipt of payment. Payment must be received IN FULL by APRIL 21, 2020. Payment is to be mailed to BCHW Skagit Chapter, P.O. Box 188, Sedro Woolley, WA 98284. 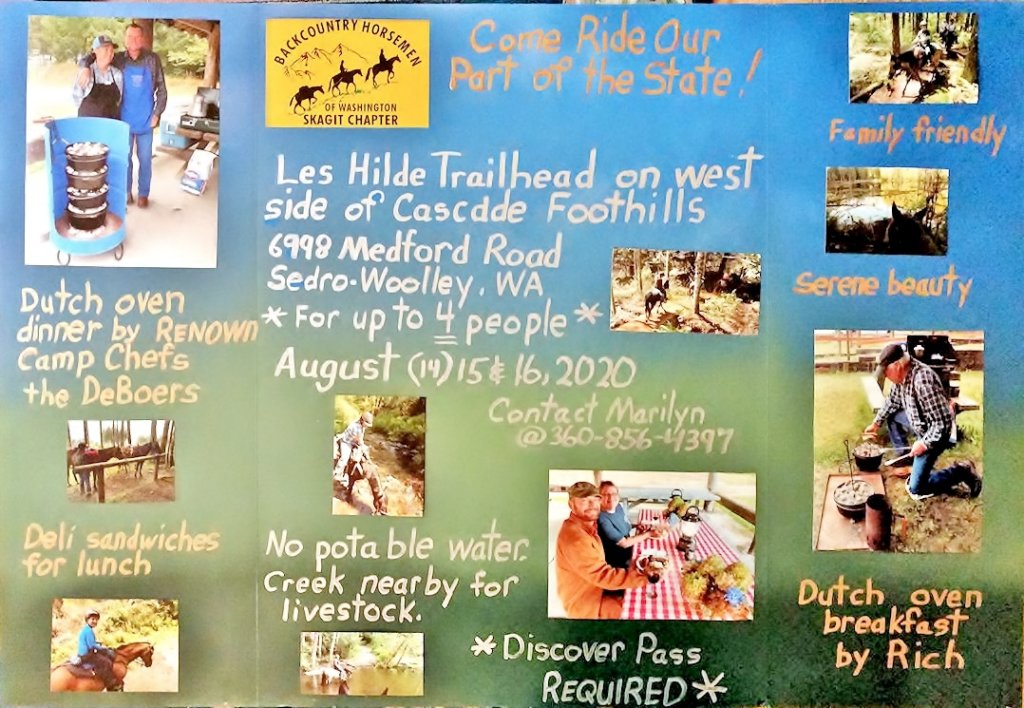 This Event is Dated for AUGUST 14, 15 & 16. Dinner will be served on Saturday, August 15th, likely after a great day of riding! There will be great memories made by the campfire each night, as this Event correspond’s with Skagit’s own Chapter Campout, so we’re expecting folks from the local community to join us for what will be a great weekend of fellowship!

Skagit members will host up to 4 (FOUR) people for wonderful trail rides and a phenominal camping culinary experience.

Don’t have 4 people? SHARE your bidding investments with some buddies or another couple!!

MINIMUM BID IS $100 – Bear in mind that the actual VALUE of this Event is MUCH HIGHER!!!

***As previously mentioned, QUESTIONS and BIDDING shall be in the COMMENTS.***

*The Description of this Event is based on details from Skagit’s 2019 Donation to BCHW. The Event in 2020 will be SIMILAR:

HERE is the DESCRIPTION from 2019 as it appeared in the Nov-Dec 2019 issue of the BCHW Magazine “The Trailhead News: “
Riding Our Part of the State started with a fantastic Dutch oven dinner on Sunday night, provided by Rob and Deana DeBoer. The gourmet menu for the evening’s meal was extensive: Brisket to dream of later; smoked chicken; beans that were out of this world; a potato dish that was beyond description; salad and beer batter bread with dill added to make your eyes roll in pleasured delight. I sure hope I didn’t forget anything! Several choices of wine to go with dinner were also available, and it was all topped off with dark chocolate pudding cake for dessert! Jerry Pearson had a nice fire going in the pit just outside the shelter and everyone enjoyed a relaxing evening with their favorite beverage while getting to know each other and discussing the trails that the next day would bring.

Monday morning was greeted by Rich Ruhl and everything he had brought for breakfast. Jason and Jennifer were delighted by the development of a hearty Dutch oven production featuring Mountain Man breakfast casserole and biscuits, topped with homemade raspberry jam; a couple different banana breads and a great fruit tray; accompanied with orange juice and coffee. Hyden McKown from the local DNR office joined us, and part of the morning’s conversation couldn’t help but fall into work related topics as Rich and Hyden discussed trail projects being planned for the monthly work party scheduled for the following Saturday.

Monday’s weather cooperated by offering charmed windows of time for riding between rain showers. Jason and Jennifer hailed from Ellensburg and other dryer environments before that, so they thoroughly enjoyed the lush green wooded trails and the bountiful patches of moss hanging from so many trees here in Our Part of the State! Colors of fall were starting to show, glistening in wetness from earlier showers and illuminated by intermittent rays of sunshine through the trees. Jerry Pearson provided all sorts of conversation and trivia on the Harry Osborne forest lands throughout the ride.

Lunch was provided by yours truly upon the perfect timing of our return to camp after several hours of riding. The black clouds above our hill opened up and rained just as we were gathering in the shelter for a nice big sandwich bar of deli meats and cheeses with all the trimmings. Coming back to the campfire after lunch gave a perfect conclusion to the Our Part of the State event, as the rest of the time was spent with more relaxing and socializing, winding down before camping one more night and heading home on Tuesday morning.

AS A NOTE – SKAGIT CHAPTER WOULD LIKE TO CHALLENGE OTHER CHAPTERS IN WASHINGTON TO OFFER THEIR INTENDED EVENT DONATION UP FOR AUCTION, TOO!
Just think of the FUN it would create!!!