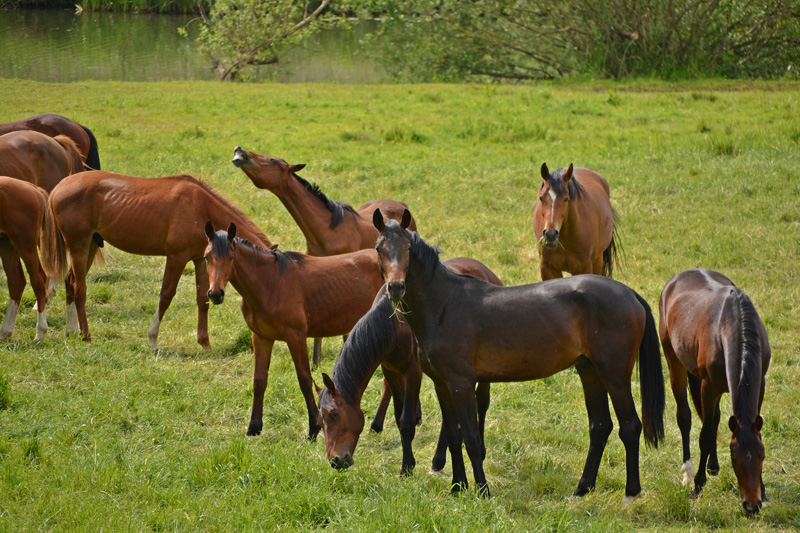 July 12, 2016 – UC Davis research has discovered that Pistacia trees can be toxic to horses if ingested.

As autumn will be upon us soon, UC Davis veterinarians are warning horse owners to keep their animals away from Pistacia orchards, as the leaves and seeds of this genus can cause hemolytic anemia, and be fatal, if ingested. 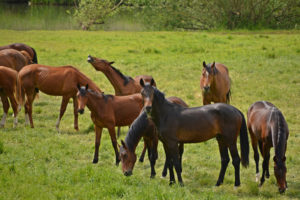 In the fall of 2013, following the acute deaths of five mares from a large herd, two surviving mares were brought to the UC Davis veterinary hospital after two days of lethargy and icterus. The deceased horses had varying degrees of colic, ataxia, pigmenturia, pale and icteric mucous membranes, lethargy and inappetance. All died within 48 hours of initial signs.

While UC Davis’ Equine Medicine Service worked to save the two mares, one of the veterinarians on the case, resident Dr. Rana Bozorgmanesh, started researching the cause of the deaths. She and the service team, along with members of the toxicology department, discovered that the sick horses had access to a planted Pistacia orchard (containing the species P. atlantica, P. terebinthus, and P. chinensis) following the fall harvest. (The most common species of the Pistacia genus is, of course, P. vera, or the pistachio nut.) There were no recent changes in herd management or housing, except for the felling of the Pistacia orchard shortly before the first horse developed clinical signs; the owner had witnessed the horses eating from trees that had been cut down. Other horses on the property that were not allowed access to the orchard did not exhibit any signs of illness.

A site visit by Dr. Bozorgmanesh, along with veterinary students and staff, was performed to inspect the property for possible toxin exposure. Sampling of the water, hay, trees, and vegetation was conducted to investigate potential intoxication as the cause of hemolytic anemia, usually associated with an oxidant toxin such as maple trees, onions, or other plants associated with oxidant damage or hemolysis in horses. None of these were found on the property.

Pistacia trees are not native to North America, but are found in California, as well as several other states ranging from the Southwest to the Southeast of the United States, where fertile land produces much of the world’s marketable Pistacia products. The California outbreak arose in the fall, the same seasonality as reported with red maple leaf toxicosis, when the leaves are wilted and falling off the trees. A similar incident with Pistacia occurred in Arizona, also at a time when leaves were falling off the tree.

“While the horses had access to the trees throughout the remainder of the year, we propose the problem lies with the felled and wilted leaves,” said Dr. Bozorgmanesh, who ultimately became the lead author on this groundbreaking clinical research. “The felled trees in the California outbreak would have allowed for easy access and ingestion of large quantities of wilting leaves and seeds by the horses, thus accentuating these effects.”

In vitro studies by UC Davis toxicologists showed extracts of the seeds and leaves induced lysis of horse red blood cells in the laboratory setting. Further research is required to identify the exact pathophysiology of Pistacia tree toxicosis, the toxic principles involved, and the quantities required to cause clinical disease in horses.

“Until that time, it is clear that horses must be isolated from these trees to prevent acute hemolytic anemia and death,” added Dr. Bozorgmanesh.

About the Veterinary Medical Teaching Hospital
The William R. Pritchard Veterinary Medical Teaching Hospital at the University of California, Davis—a unit of the #1 world ranked School of Veterinary Medicine—provides state-of-the-art clinical care while serving as the primary clinical teaching experience for DVM students and post graduate veterinarian residents. The VMTH treats more than 51,000 animals a year, ranging from cats and dogs to horses, cows and exotic species. To learn more about the VMTH, please go to www.vetmed.ucdavis.edu/vmth. Timely news updates can be received on its Facebook (www.facebook.com/ucdavisvetmed) and Twitter (www.twitter.com/ucdavisvetmed) pages.