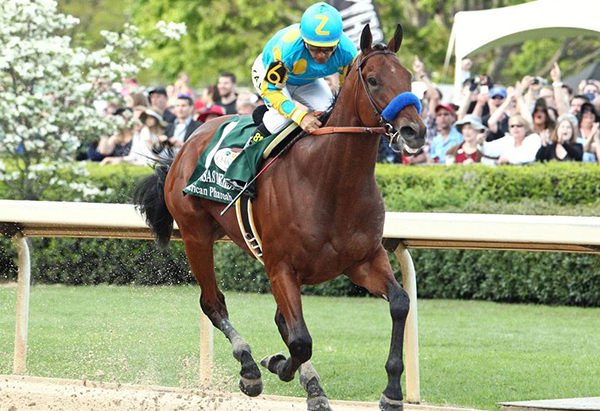 For 37 years, Thoroughbred fans the world over waited for the next legendary three-year-old to claim racing’s Triple Crown: the Kentucky Derby, Preakness Stakes, and Belmont Stakes. In 2015, that legend arrived: A bay colt with a big stride and improbably short tail named American Pharoah.

Owned by Zayat Stable, LLC, and trained by the renowned Bob Baffert, American Pharoah and jockey Victor Espinoza had a hard-fought win in the Kentucky Derby, returned two weeks later to persevere over a sloppy track and torrential storm in the Preakness, and came down the homestretch of the 1 1/2-mile Belmont in New York to a grandstand erupting in cheers as the pair succeeded where 13 Triple Crown hopefuls before them had failed, executing – in the second-fastest time (2:26:65) since Secretariat — a wire-to-wire win by 5 1/2 lengths. In that moment, American Pharoah became only the 12th horse in racing history, and the first since Affirmed in 1978, to earn the title, Triple Crown Champion.

The American Pharoah Traditional 1/9 scale model captures the 2015 Triple Crown winner at full gallop as if reaching for the finish line, in rich semi-gloss tones of deep bay with black points and grey hooves, and expressive, hand-detailed attention to the eyes and muzzle. True to every detail, the model also bears the stallion’s distinctive tail.

Each collectible Breyer figurine is both beautiful enough for display and durable enough for children to play with. Models will be available at BreyerHorses.com and toy stores and tack shops nationwide.

For horse-crazy girls, there are only two kinds of horses: real horses and Breyer model horses. The iconic Breyer brand, a division of Reeves International, was founded in 1950, and is the leader in creating the world’s most authentic and realistic model horses for play and collecting. These hand-painted, collectible model horses and animals have a worldwide following, thanks to the incredible sculptures that form the foundation of the line. Today, Breyer has expanded its line to include play and craft activity sets and horsey accessories for its younger fans and its collector lines to include resins, crystal and porcelain. To see the complete line of Breyer horses, find a retailer near you, and to learn more about Breyer events and the model horse hobby, visit us at breyerhorses.com!