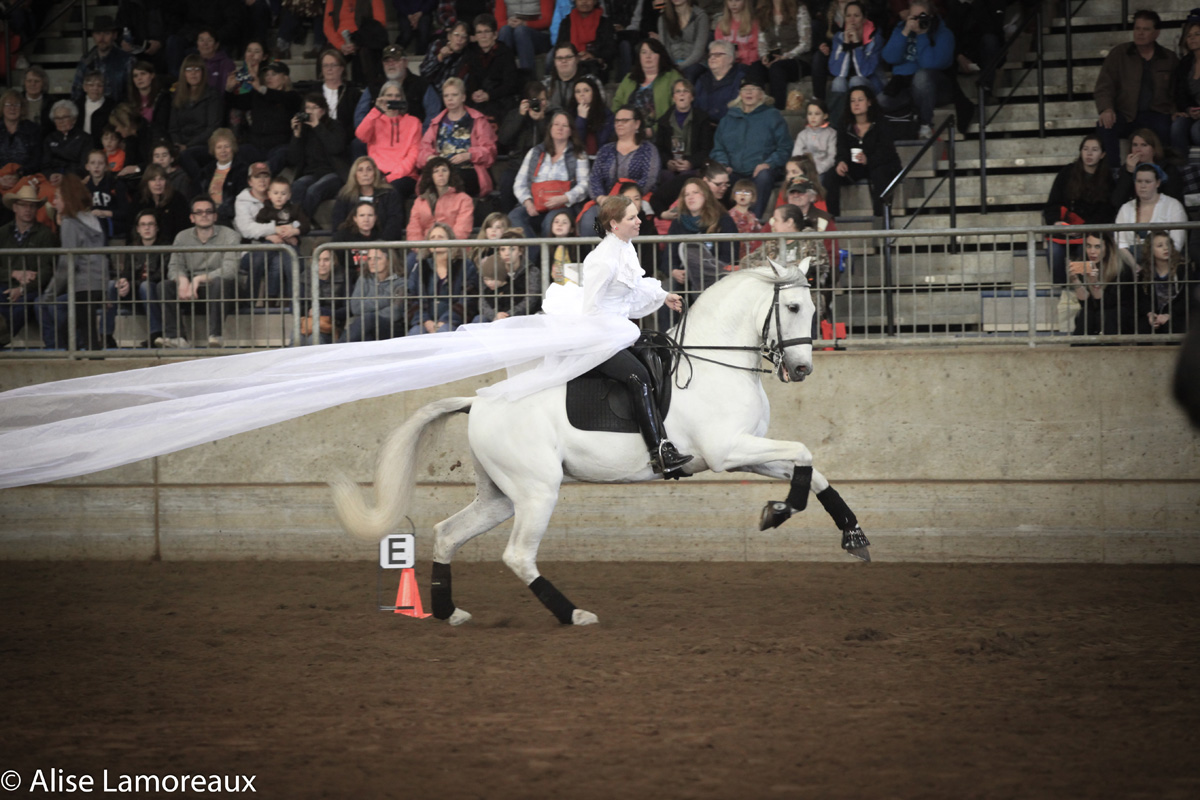 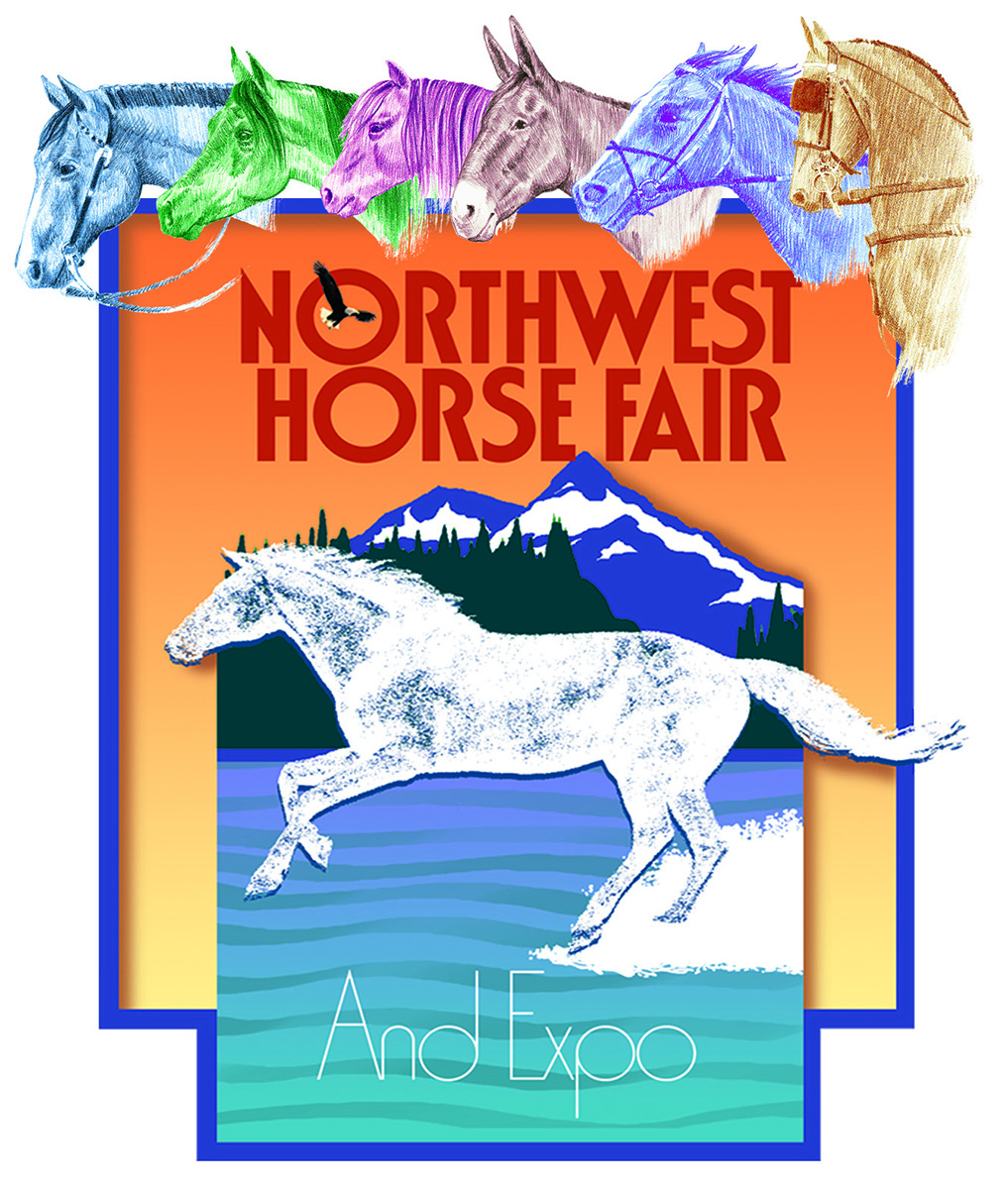 Thousands of Northwest horse enthusiasts gathered in Albany, Oregon, March 24 through 26 for the eighteenth annual Northwest Horse Fair and Expo 2017, presented by Akins Trailer Sales. “We had a great turnout for this year’s Northwest Horse Fair.” said John Cloe, Event Founder and Manager. “Both children and adults alike enjoyed the fantastic variety of horse events that we offered, with something for everyone!” Mr. Cloe continued, “Attendees enjoyed top-notch clinicians, equine demonstrations, workshops, the BreyerWest® model horse show, our huge trade show, engaging equine entertainment, and the Mustang Adoption Challenge!”

For the first time ever, the Northwest Horse Fair and Expo hosted the Mustang Adoption Challenge 2017, presented by the non-profit group, Teens and Oregon Mustangs. Contestants acquired their mustangs in December and had just 100 days to train and prepare the horses for the Challenge. Youth and adult contenders with their mustangs, competed in Overall Body Condition, Showmanship, In-Hand Trail obstacles, and Riding classes. Following three days of rugged competition, the final results were announced the last day of the expo, with Division winners receiving a certificate for a brand new saddle! Youth In-hand Division Grand Champion was Layla with her mustang, Jolene; and Reserve Champion was Renee with her mustang Jericho. The Teen Riding Grand Champion was Allie and her mustang, Bentley; and Reserve Champion award went to Alexis and her mustang Axel. The Adult Riding Grand Champion was Rachel Macdonald and Dayton; and the Reserve Championship went to Scott Depaolo and Rocky. Following the awards ceremony, the trained mustangs were live-auctioned to new owners. The highest bids for all mustangs were paid for the two winners of the Adult Division: $7,250 paid for Dayton, with trainer Rachel Macdonald, and the second highest bid was $6,200, for Rocky, trained by Scott Depaolo. Teens and Oregon Mustangs officials were pleased with the results, as all 38 mustangs were sold and adopted through the auction.

The Breyer® Horse Model Horse Show, BreyerWest® returned this year, as part of the Northwest Horse Fair. The expansive model horse event featured the model horse shows, model horse hobby demonstrations, artistry and crafts. “The Open Show was completely sold out, with competitors coming from all over the United States! The model horse shows, workshops and events were quite popular with increased attendance from last year, for all events!” said Mr. Cloe. “The free Stablemates painting was a huge hit, with Breyer enthusiasts painting nearly 1,200 miniature pony models, as keepsakes!” added Mr. Cloe. Rounding out the model horse activities, equine sculptors, painters, model horse tack-makers and model hobby experts taught seminars and workshops throughout the weekend.

A delightful diversity of equine entertainment was featured at the expo, providing fun for audiences of all ages! Endo, the amazing blind horse, captured the hearts of the audience, as he demonstrated remarkable trust in his owner Morgan Wagner. Morgan showed off Endo’s liberty work; then gave an extraordinary performance of advanced dressage movements, as she rode Endo with no saddle or bridle! The BlackPearl Friesian Dance Troupe wowed the audience with fantastic dressage maneuvers to lively music, and featured a mesmerizing rendition of a carousel with long flowing scarves, in a circular kaleidoscope of dancing horses and riders. The Brokenridge Drill Riders put on a precision drill show, as horses decorated with bling, ridden by costumed riders, sparkled and sped to the rhythm of Country music. The Legendary Longhorns featured two massive 2300-pound Longhorn steers, who were ridden into the arena; and the Northwest Cavalry Association delivered an engaging demonstration of the methods used to train cavalry horses for the rigors of cavalry life and battle.

Horses representing a wide variety of domestic and foreign horse breeds were featured in the Breed Showcase and Stallion Reviews. A striking collection of horses was on display: glamorous, glitzy, rugged, regal, stunning and stout; horses with spots, dapples, mixed and solid colors; and horses with feathered legs and long flowing manes … all were a part of the Northwest Horse Fair!

Stallion and breed groups created an engaging atmosphere in the stall barn for visitors viewing horses, through attractive stall decorations. Event Management hosted a Stall Decorating Contest and announced the “best dressed” stall winners: In the Breed/Discipline Showcase Category: First Place honors went to the Pacific Wild Horse Club; Second Place was awarded to the Northwest Cavalry Association; and the Third Place was given to the Canadian Horse Heritage and Preservation Society. In the Stallion Review category: the First Place prize was awarded to Parrett Mountain Gypsies; the Second Place winner was Premier New World Gypsy Cobs; and the Third Place prize went to Woody Acres Ranch.

“Families attending the Northwest Horse Fair enjoyed the KMTR Youth Day on our last day of the expo, with free admission for children and young people involved in FFA, Pony Club and 4-H”, said Mr. Cloe. “We also had a great showing of people who brought food donations for Albany Helping Hands Homeless Shelter on Friday, in turn for an admission discount to the Northwest Horse Fair. We thank everyone for their generous support!”