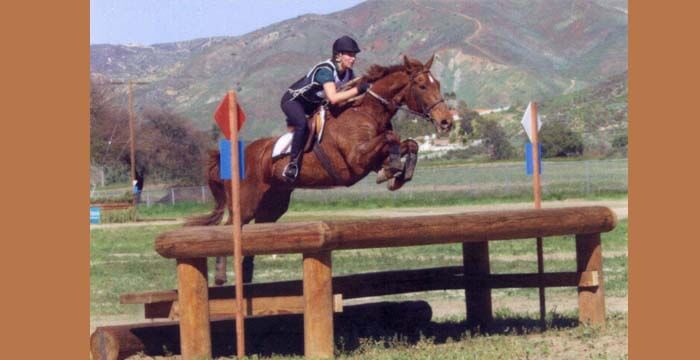 Jessica Heidemann is a successful eventing trainer in the Pacific Northwest. As a young rider, Jessica had a special horse, French Twist (Frenchie), who passed away this past January. Their story is one of strength, grit, perseverance, and love. For our Performance Horse issue, the Northwest Horse Source thought it a good time to tell the story of this extraordinary horse and his determined young rider.

How did you acquire Frenchie?

Frenchie was a 16’2” Belgian Warmblood/Thoroughbred cross. I bought him from Peter and Paul Delbrook in Florida. It was my one and only big purchase and I felt pretty lucky to have a mom supporting me to get a horse I could continue up the levels with.

My coach at the time, Jean Moyer (who passed away just three weeks after Frenchie), called me and told me I had to get on a plane because she’d found my perfect horse. When I saw him, I didn’t like him. He was an average mover in a plain brown wrapper. My horse at the time, G.G., was a much better mover and cuter over fences. I rode him and didn’t love him.

Jean sat me down and told me that I needed to get over myself. This was the horse for me. And she was right.

How was the training in the beginning?

When he got to our farm (Cain Lake Stables) in Alger, Washington he’d lost a lot of weight. He wasn’t fun to ride. He tried to kill me regularly — not because he was naughty, but because he loved to play and was extremely mischievous. Honestly, my heart belonged to my other horse, G.G. I did a few horse shows and at every show G.G. was either first, second, or third and Frenchie was either last, second to last, or eliminated. I really didn’t like him and wondered what I’d gotten myself into.

It was maybe four or five months after I got him that my life was changed forever when my beloved G.G. was hit by a car and killed while I was riding with a friend. I was on Frenchie at the time and went galloping down the road after them trying to prevent the wreck that was inevitable.

Frenchie was injured and dislodged three bone chips from his fetlock. He went in for surgery at WSU. I got a call a few days after the surgery from the surgeon telling me Frenchie had developed a joint infection. They were going to have to open things back up and clean out the joint; he would probably never be sound again. That was his first “career-ending” injury. He had two more, none of which ended his career. He didn’t believe in silly things like that.

The universe works in mysterious ways and ultimately losing G.G. and the time off that ensued after surgery finally brought Frenchie and I together. We became the best of friends. Slowly we got back to competing and even more slowly we started to win.

Describe your most important memories of Frenchie.

My favorite early memory of him was at our very first competition. I was nervous. We were just going training level to get a good run.

I remember the start box guy starting to count me down. I took Frenchie into the box and he very quietly walked up to the back of the box and jumped out from a walk over the four-foot rails. I was 19 and had no idea what to do. I thought maybe I was eliminated. But the guy assured me I just had to come back into the box and restart and it would be okay. I went to put Frenchie back into the box and he grabbed the bit and tried to jump the rails a second time! Thankfully I got him flipped around and ran around the course. I was so traumatized by the experience I don’t remember anything else!

The start box continued to be a problem for him. Nobody could say anything or he would start throwing himself backwards. Once at Jackson Hole I asked the man to count just on his fingers; he was trying to be helpful and said the word “ten” as he brought his fingers up. Frenchie threw himself backwards and backed almost all the way to the barns before I got him going again. He was so excited he didn’t know what to do with himself. That was actually one of our best cross-country rides. I remember being so relieved when I found out that the start box at Rolex had a giant timer, so nobody had to count.

Rolex is another big memory. How could it not be! My first time around I was beside myself. I burst into tears randomly throughout the entire competition. After every single jump on cross-country I had the biggest internal celebration of my life. I remember pumping my fist in the air after the sunken road thinking that it was so cliché but was unable to stop myself. Frenchie made you feel like you could do anything, and he was having as much fun as I was.

Yes—like a creative, boisterous 5-year-old little boy is difficult! He bucked me off so many times, once was when I was rehabbing him after his second career-ending injury. We were only supposed to be walking. Suddenly I was galloping around the arena and being thrown into the wall. There were jumps set up in the ring and Frenchie proceeded to run around the arena jumping all the jumps. I remember crying so hard I could barely talk and calling the vet and telling her what had happened. I was sure his entire rehab had been set back. She laughed, told me that it happens, and asked me if he looked sound. That’s a good vet!

He was also extremely mouthy. It was almost impossible to keep a blanket on him. He would even pick up sticks and run around with them in his mouth terrifying all the other horses.

One time, I took him to Temecula before one of my trips to Rolex. There were cross-country jumps built into the fence lines, with full-height fence rails over the top of them. He was turned out next to a bunch of cows, which he loved.

After putting him outside I went back into the barn to clean tack and someone came in telling me that Frenchie was out with the cows! I went running out and sure enough, there he was, out with his new friends. I yelled at him and he perked his little ears up and cantered towards me jumping gracefully over the fence. He trotted over to me at the gate just as happy as can be. I started laughing and he turned and ran back and jumped back over the fence to hang out with the cows. I did bring him in since I couldn’t have my Rolex horse just jumping whatever fence he wanted!

With the mouthiness came the ability to be a master of escape. On that same trip I was in Florida, hooking up the trailer and getting ready to head to Kentucky. I must not have latched his stall completely because when I came back to get him to load up, he was gone. I was beside myself. Who loses their Rolex horse?

I looked everywhere for him on the property. I called my girlfriend who lived down the road to come help and we looked everywhere. I even unhitched the truck and drove around, crying the entire time. Finally, my boyfriend called out, “Is this Frenchie?” He was in the barn eating alfalfa. Ugh! I never looked in the barn. I just assumed he had left on some grand adventure.

He loved to jump and wanted to stay safe, and that fills you with confidence. He loved people, loved to work, and loved to please. As I’ve gotten older and worked with more horses, I see how incredibly rare that is.

He was never built for dressage; he tried because I asked him. He had an easy step and was so maneuverable. He was game for any adventure and never said no. And that horse was sound! I didn’t realize how rare a gift that is in horses. One time I had him professionally shipped to the East coast for an event at Fox Hall. When he arrived, he had a giant hole in his leg, down to the bone. I was sure our East Coast dreams were shattered. But Frenchie didn’t believe in lameness and he didn’t believe in quitting.

What are the most notable things you did with him?

He was my first everything. My first intermediate, advanced, and my first walk up through international levels. We got named to the shortlist for both the World Equestrian Games and the Olympics. I got to ride on the winter training lists and developing rider lists for three years in a row.

We competed at the World Cup in Malmo, Sweden. Everything about that experience was a trip! Flying was crazy. Our competition stabling was in a warehouse next to the Turning Torso that was in the process of being built. There was a bus stop right outside. To get to the competition area we had to take the horses out through the construction zone, up the sidewalk past the bus stop, and into the little marina where we had to cross a footbridge over water and boats to get to the park where we did dressage in this little area with a bunch of apartment buildings looking down.

The water jump was into saltwater and I got some in my eyes. By the time I cleared my eyes and got my bearings I turned down the wrong gallop path. People stopped me and I had to turn around, which was fine, except a spectator ran across my path and then tripped and fell down in front of me. I had to maneuver around her in order to get back on course. I was shocked to see it on the Swedish news that night in the hotel room!

What came after he left you?

After his second Kentucky he sustained his third career-ending injury. I tried to retire him, but he’d chase the horse trailer down the road, and we were worried that he’d hurt himself. I knew he had to get back to work.

I reached out to some friends in the jumper world and was lucky to find a lease for him. He did the children’s jumpers and was extremely successful. Eventually, I brought him home to teach my own students. After a year or so I had another person in the jumper world reach out and offer to give him a pretty easy gig. He stayed with her for most of the rest of his years.

From there he moved to the amazing Colleen Aufiero’s place where he found his way into the heart of her worker, Katy. Katy loved him so much and treated him like the royalty that he was until the day he passed away peacefully at the ripe old age of 29.

There aren’t enough words to describe how incredible this horse was. I wish I had realized at the time how lucky I was to have him in my life. I know that he is currently over the rainbow bridge galloping with his buddies and my old coach Jean Moyer who always believed in him.