(The author is providing information based on her knowledge and experience. In no way does she profess to have all the answers. She encourages the reader to do their research for the most complete information.)

If you’ve been working this series with your mustang, by now you should have a horse that is comfortable with you, knows to move his shoulders or haunches with non-physical pressure, knows how to lunge on a circle, understands basic verbal cues for faster and slower gaits, and stops when asked.

It’s an important step to get your mustang relaxed with you above his back. Mustangs have greater sensitivity to something above them, since that usually means a predator attack. As the time approaches for riding and saddle training, I use my big mounting block to teach him to “give me his back”. This is essentially the kind of work you would do to train your horse to approach and stand at the mounting block.

Initially I have my mustang walk up to the mounting block as perpendicular to it as possible (not swinging his hips away or pulling away). Using the halter and lead I apply a come-forward pressure on the mustang until he moves his feet, even one step, toward me while standing on the mounting block. Then release and reward.

I keep this up, step by step, until he is perpendicular to the mounting block. This may require a lot of circling and pressure around the mounting block, but I try not to step off. Instead I have my mustang go back, forward and around until I get a slight change with his back positioned closer to me, which is often just a matter of luck initially (and where the “whoa” command comes in handy).

When he steps closer with his back, I release all pressure, give him comfort, and let him know he made the right move. Eventually I’ll start to slide a leg over him, making sure if he spooks I can easily swing my leg off without falling. When this becomes comfortable I start adding my weight, a little at a time, continuing to reward and praise. I never remain too long with the weight on his back in the beginning.

After a while, your mustang will be comfortable with you above and putting weight on his back. In fact, you may find that you can sit on your mustang for a moment or two. Make sure you can slide back onto the mounting block if your mustang shies away. I generally do this work before I introduce the saddle.

All the work you’ve done with your mustang has built a level of trust that is based on a language of pressure, release, and reward. Putting a saddle on your mustang should be an easy process if you allow it to happen in incremental steps. Set it on his back, keep a hold of it, use your voice to soothe him, and look for a moment when he relaxes; then remove it.

Continue to do this on and off; try to keep the saddle on through any fussiness and remove it when he’s relaxed. Soon the saddle shouldn’t bother him anymore and you can leave it on. This is when I’ll cinch up.

Cinching needs to be done as efficiently as possible so you don’t have a half-tightened saddle that rolls. After you tighten the cinch you may need to stand back and let him work it out. If your lunging and verbal commands have been thorough, you can usually send him out and get him moving. This helps to calm him and engages the brain.

I spend time doing ground work and lunging while the mustang is saddled, including asking him to give me his back at the mounting block. If he is going well with all the work mentioned, then it’s time for the first ride.

Make sure this happens in a round pen. I generally get on with just the halter and lead held in one hand. You don’t need to worry about steering – there’s no place they can go in a round pen. Use your vocal commands to get his feet moving. Just let him move however he wants although, with the lead in one hand, you do have the option of circling him tighter in one direction if you need to slow him down.

On the first ride, I like to get them to walk, trot and sometimes, for ones that feel solid under me, I’ll even ask for a canter. Getting this movement out of the way takes a lot of pressure off a young horse. He learns he can balance with you up there, reducing fear.

Congratulations! You now have a mustang who has had his first ride. You have taken a wild horse, forged a bond of trust, and have given him a language that will help him understand and succeed with you. Go forth and ride together! 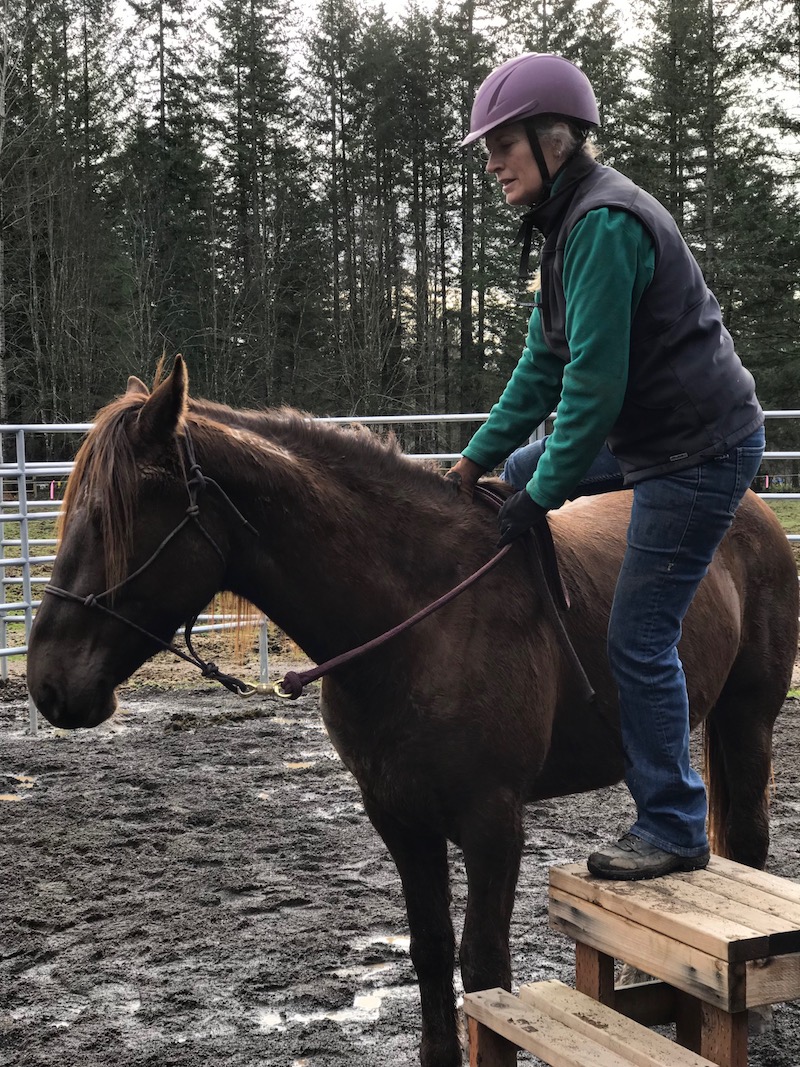 Adrienne Devoe is a website developer who has a passion for working with horses. She grew up on the East Coast doing pony club and since that time has owned and trained many horses and has thousands of riding hours under her belt in arenas and on the trails. Later in life she developed a strong interest in dressage and has pursued it with dogged determination, showing up to third level on her Irish Sport Horse and aiming for Grand Prix competitions.
Recently she inadvertently discovered mustang training while building a website for the Teens and Oregon Mustangs (TOM) program. Now, besides dressage, she is working with her own wild mustang with the TOM program as a competitor. The year before, she adopted two beautiful mustangs from the TOM program that have stolen her heart and turned her into an advocate of the versatility, resilience, strength and ability of the American Wild Mustang.