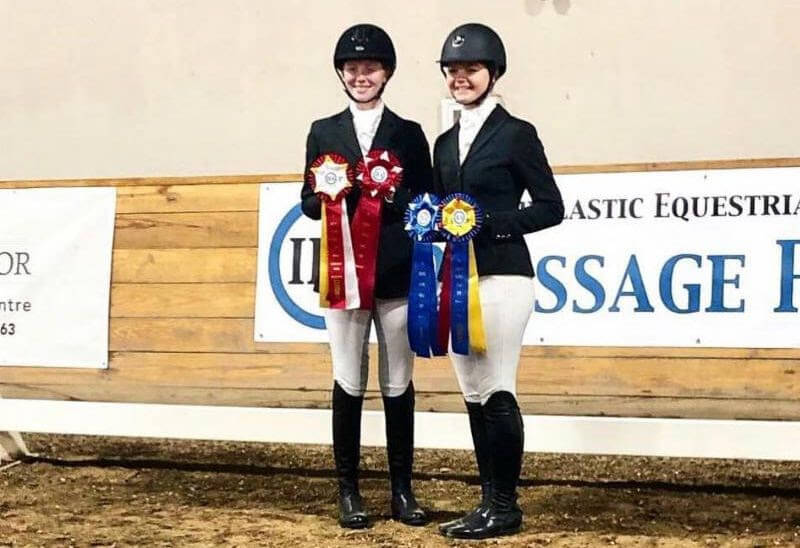 May 1, 2019 (Columbus, Ohio) – The Interscholastic Equestrian Association (IEA) hosted a two-day Dressage Finale (Horse Show) on April 13-14, 2019 at the Otterbein University Equestrian Center in Westerville, Ohio. The Finale was an opportunity for riders in grades 6-12, parents and equine professionals to come together to celebrate the culmination of a three-year Dressage Pilot Program of Dressage scrimmages held throughout the United States. In addition to the competition, the weekend included a United States Pony Clubs (USPC) sponsored Horsemanship Test and college fair. Nearly 150 young riders from across the nation participated. Dressage will become a permanent IEA program beginning with the 2019-2020 season.

Otterbein University in Westerville, Ohio played host to the IEA Dressage Finale for the second year in a row and supplied the riders with quality horses for the weekend. There were both Team and Individual riders competing in the Finale, with many riders competing in both qualifications. Saturday placings saw the Grier School, from Tyrone, PA, take the Upper School Team Championship. RGB Equestrian, from Skaneateles, NY, took Reserve Champion. On Sunday, RGB Equestrian took the lead and won the Middle School Team Championship, with Standing Ovation, from Port Matilda, PA, as Reserve. The 2019 Champion IEA Dressage Rider was Lindsay Shaw from Grier School. Brynne McIntyre from Linden Hall took Reserve Champion. The weekend also saw Lindsay Shaw win USDF High Point Champion and Brynne McIntyre win USEA High Point Champion. The Sportsmanship award was presented to Makayla Brooks from Three Rivers for her outstanding attitude and volunteerism, along with her standout leadership at the show. Otterbein University’s Flynn was awarded Horse of the Show.

In addition to riding classes, IEA members also had the opportunity to take a written Horsemanship Test hosted by USPC. The top placing written exam takers moved on to a hands-on Practicum Horsemanship Exam where they had to point out and explain the workings of a horse and its tack. Awards were given to the top eight Middle School and Upper School participants.

About IEA:
Now approaching its 18th year, the IEA has nearly 14,000 members across the United States riding and coaching Hunt Seat, Western and Dressage disciplines. The non-profit (501(c)3) IEA was organized to promote and improve the quality of equestrian competition and instruction available to middle and secondary school students and is open to public and private schools and barn teams. There is no need for a rider to own a horse because the IEA supplies a mount and tack to each equestrian for competitions. Its purpose is to set minimum standards for competition, provide information concerning the creation and development of school associated equestrian sport programs, to generally promote the common interests of safe riding instruction and competition and education on matters related to equestrian competition at the middle and secondary school levels.