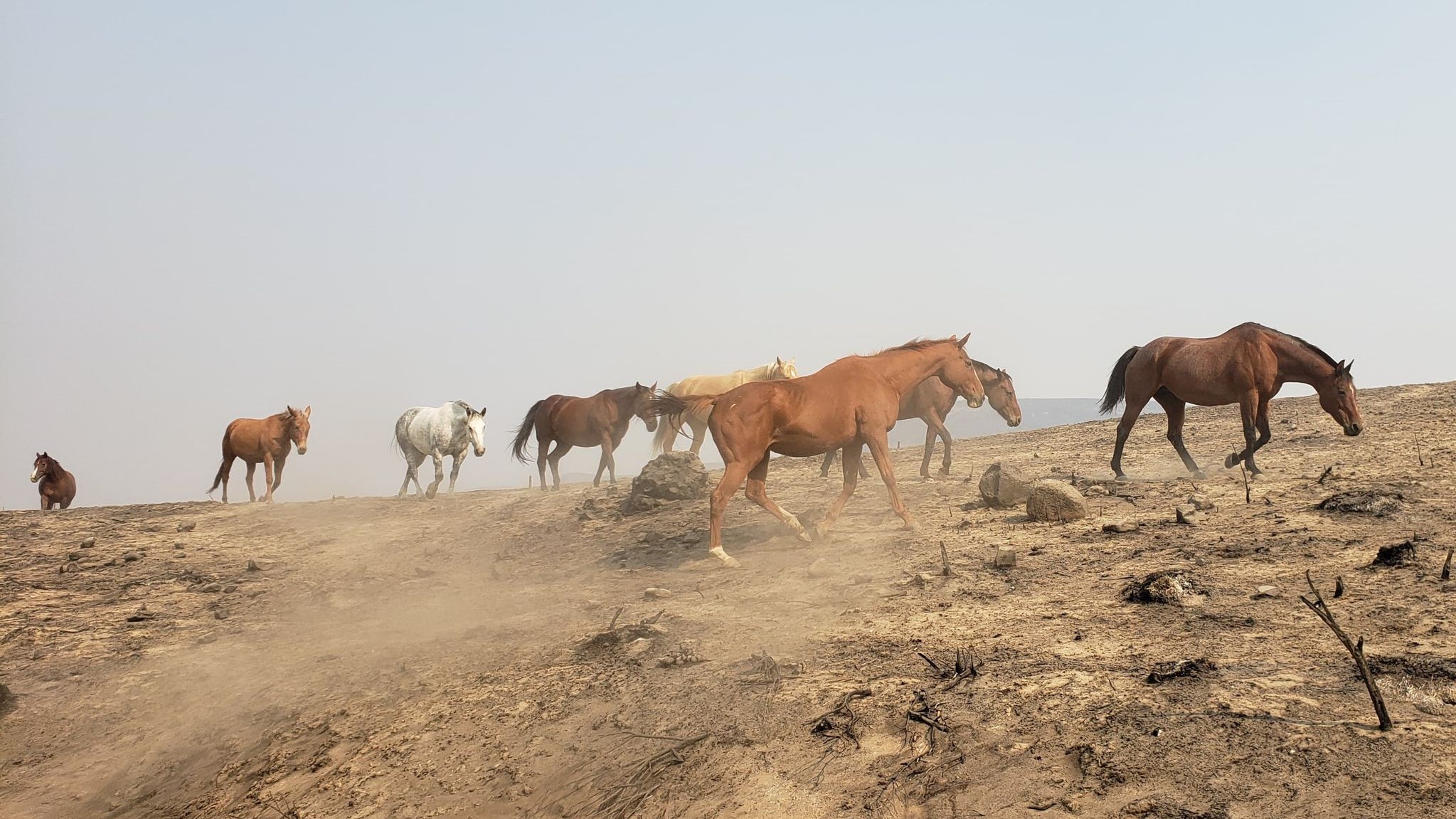 Stories were compiled by Kim Roe.

Labor Day weekend of 2020 was the beginning of a horrific wildfire disaster in the Pacific Northwest. The fires arrived quickly—whipped up by drought, heat, and high winds. Many people barely had time to get themselves and their loved ones to safety. Homes and businesses by the hundreds burned and lives were lost. We choked in toxic air and prayed for rain.

People with large animals had the additional stress and obligation of transporting and finding safe harbor and feed for their animals. Many horse owners, farmers, and ranchers lost their hay and other animal care supplies.

But out of the grief, sadness, and destruction came many stories of heroism and kindness. People opened their homes and barns, veterinarians offered their time and skills, and horse lovers from all over the Northwest donated feed and supplies, transporting them to the animals and people that most needed them. Large private commercial facilities opened their barns to displaced animals as did fairgrounds and expo centers.

While researching this article I was overwhelmed by the sheer number of stories of generosity from this time. The following three stories, written by those involved, just skim the surface.

Small Property Owner Opens Her Door and Her Heart

I live in Banks, Oregon—due west of Portland. On September 7th I received a high wind alert on my phone, which also warned of a higher risk of fire. I was worried about a huge tree on my property that could fall on the house, so I made some precautionary plans to avoid injury if that happened. I slept nervously. On the morning of September 8th, I woke up relieved that the wind had died down and checked Facebook.

One post was from a friend in Sublimity, about 80 miles south, saying that it was dark and smoky at his house. My parents and sister live not far from Sublimity, so I immediately checked the news. The Beachie Creek fire was going strong less than five miles to the east and the Riverside fire had also begun. I called my mom and sister to make sure they were okay and knew about the fires.

Meanwhile, I posted on Facebook that I had room if anyone needed an evacuation site and to spread the news. Because of my involvement with horses and Working Equitation, I knew that several of my friends and their horses lived close to the fires. As the fires grew, people began to contact me. And then they began to come. All of them were friends of mine from Working Equitation. One of the evacuees is friends with my roommate, Ashley.

All told, we ended up with 15 horses, 1 llama, 8 goats, 1 rooster, 10 cats and 2 extra dogs. I housed one person in my living quarters (LQ) trailer, four other people stayed in two additional LQ horse trailers. I think I had nine trailers and trucks plus all those animals all parked on my little three acres. Between all the people that arrived, we repaired some stall doors and cleared out some old stall space and managed to house everyone.

We opened our house for bathroom and showers and asked folks to help themselves. Everyone brought their own feed and bedding, and everyone helped each other to the best of their availability and capacity. We had a bunch of group meals (mostly outside) and just took it day by day. Ashley works from home, so she was there. I was gone every day to my regular job.

I was extremely glad I could help in some way and had the space to do it. I’m sort of a “do what needs to be done in the moment” person, so I didn’t worry too much about planning. I could not have designed or envisioned a better group of people. They were kind, industrious, thankful and appreciative. One guy, even though his house came inches from the flames (scorch marks!) didn’t want to just sit around, so he built me a well house. A bunch of us fixed fences and gates and whatever else needed doing. If an owner couldn’t stay on the property, we fed for them. I know that any of those folks would return the favor if I needed it.

By the end of this evacuation journey we all decided that we need to live on a communal farm—that’s how well we got along and cooperated. All of our friendships were deepened. It was actually really fun, which seems paradoxical, but it truly was the community spirit that enriched us all. I’d do it again in a heartbeat. I gained far more than I gave.

One lady whose horse stayed at my house had a housekeeper come through and clean my house. Another group bought me a new wheelbarrow and fetched some feed I needed. Another fellow is going to rebalance all my crooked doors and gates!

My advice for others: if you’re going to accept a sudden influx of animals and people you have to go all in and do what it takes without worrying about your stuff or your property. Stuff is going to get dirty and break. Stuff is going to get misplaced and lost. There’s a risk someone or something will get hurt on your property and that could end badly; no one signed releases, and I sure wouldn’t survive a damage or injury lawsuit, so if that’s a worry for you, I wouldn’t recommend the action I took, but I did it anyway because that’s a philosophy I’ve chosen to live by and that I admire in others.

I would do it again in a heartbeat…because the heartbeat counts, the stuff doesn’t.

Non-profits Work Together in Eastern Washington

Two non-profits, The Hayburner Project of Bellingham, WA and OkanDogs from Cashmere, WA worked together to provide feed and care to horses and other livestock in Eastern Washington both during and after the fires.

We at The Hayburner Project had a relatively quiet summer. With the pandemic, we simplified our process: feed and hay were called into local feed stores for clients to pick up. We don’t currently store hay.

The devastating fires in Eastern WA brought new challenges. We were extremely fortunate to have the help of Penelope Varn and OkanDogs, whose main mission is to facilitate dog adoptions in the Okanogan County area. They were able to direct us to the horse needs in the fire areas as well as provide a local hay supplier with delivery. OkanDogs has (at this writing) provided over 1500 tons of hay to fire-affected ranchers!

We gather donations from our wonderful donors through PayPal and these funds go directly to buying hay and feed. We were able to buy around ten tons of hay for horses displaced and injured at the Omak Fairgrounds, the surrounding Okanogan County area, and Mansfield in Douglas County.

The fires in the Graham area resulted in one horse suffering burns that required hospitalization. We were able to assist with her vet bill and supplies for her recovery. We will continue to support fire victims as well as non-fire related equine needs in our communities as our available donated funds allow us to.

People can apply for assistance from The Hayburner Project on our website, through our social media accounts, or by phone or text. Currently our focus is in Washington, but we are also available to help in Oregon and are taking the steps to be able to raise funds there.

For more information or to donate to The Hayburner Project visit thehayburnerproject.org.

Our wildfire response provided veterinary care at the Benton County Events Center and Fairgrounds, Linn County Expo Center, and the Oregon State Fair and Exposition Center. We visited the Benton and Linn locations once or twice per day and also were available for emergency services. Visits to the state fairgrounds were offered on an as-needed basis. We provided hospitalized care to any large or small animal injured or ill as a result of the wildfires and evacuation endeavors.

At evacuation center visits, we addressed any urgent medical needs that had arisen as well as performed a wellness scan through all areas housing animals to try and detect any additional problems. We usually took teams of two doctors and three to four students at each visit with the vet truck fully stocked with medications, supplies and diagnostic equipment.

There was also additional support from local veterinarians, so we worked in complement to them as well as with the many other volunteers. We saw and treated all types of evacuated animals — from the odd emu to the usual pigs, cattle, horses, sheep and goats. Between the evacuation centers, we reached over 1,400 animals.

The coordinators at all locations did an amazing job managing animal care and well-being during this chaotic time. I cannot adequately emphasize how important the animal husbandry aspect of an evacuation center is and how well these teams mastered it — especially given the short-notice and panic-ridden circumstances.

This was as much an opportunity to reassure distressed animal owners that their creatures were okay as it was a means to tend to injuries/illnesses associated with wildfire evacuation. Most of the issues we treated were associated with the stress of the situation and injuries that occurred during transport or while in temporary/makeshift housing rather than from the fires directly.

Visits included visual inspection of animals housed at the evacuation centers as well as ER treatment for any issues arising over the course of the animal’s evacuation and stay at the center. Treatment ranged from colic to lacerations to respiratory disease.

Fortunately, little to no burns needed major treatment as far as the large animals and livestock at these facilities. We were extremely lucky. A special thanks to all who generously donated their time, expertise, snacks, computer skills, money and moral support.

See this article in the 2020 November online edition: