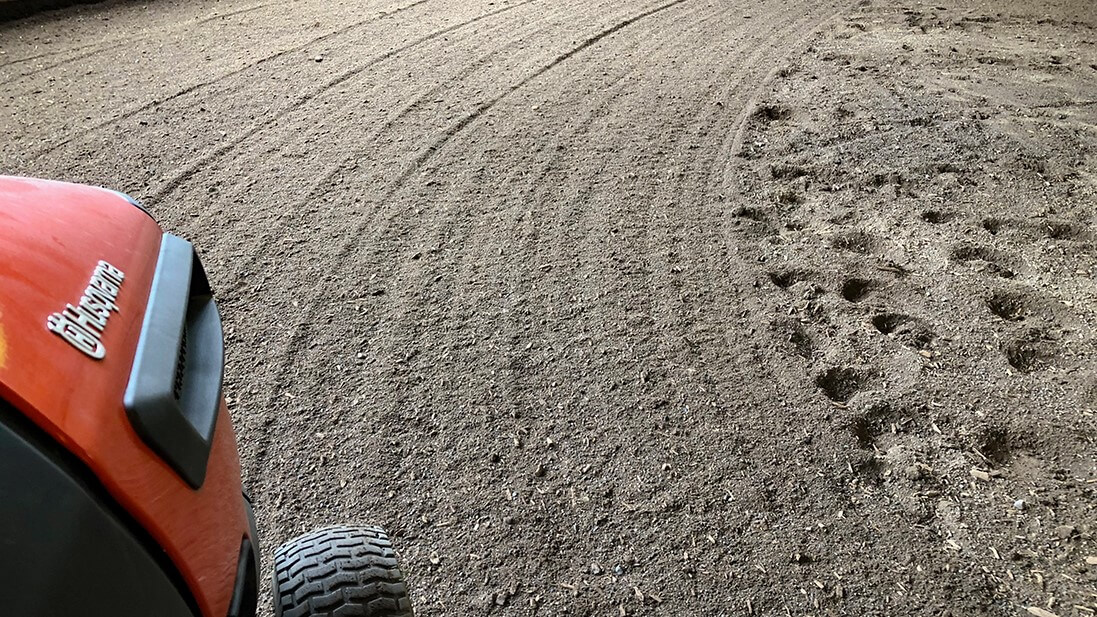 A year ago, I started looking for a new arena harrow. For years I’d used a Parma Groomer that did a good job, but it was difficult for me to adjust and maintain. The points (sharp pieces of metal that screw onto the harrow teeth and cut into the soil) would wear down quickly in my sand footing; I would lose them in the arena, and then end up wearing down the harrow teeth (or “s” tines) themselves.

Replacing points and S tines was difficult for me, as the bolts and screws that held them onto the drag would also wear down and corrode. It was a long hard job, and I always ended up having to hire a handyman to change them out for me, which cost me close to $400 in labor and parts. This happened about twice a year.

The other issue for me was that it was tricky to get the adjustment “just right”. If I tried to dig up the footing a little deeper (or less deep) I’d often end up with waves in the footing or spots that had no footing at all because the leveling bar pulled too much footing material along.

I finally got rid of the Parma Groomer and used a drag (or chain) harrow on my footing but it wasn’t doing that great of a job either—it smoothed the footing nicely, but I couldn’t dig into it at all so the footing was getting too hard.

So, the hunt began. My first choice after talking to friends and colleagues with equestrian facilities was an ABI Arena Drag. But the small one I considered to pull behind my tractor cost just over $5000. My budget just couldn’t handle that.

One day while teaching at a student’s home, I noticed her sand arena was groomed beautifully and the footing felt great under my feet. She told me about her little groomer, called a Handozer, that she pulled behind her riding lawn mower.

After the lesson, I took a look at it and I was pretty skeptical. It was a tiny little tool, but she offered to let me use it for a while and the result in my arena was quite nice. It’s very easy to move — you can put it in the trunk of your car easily. Adjusting it is easy too, and you can put a cinder block on it to weigh it down. It’s such a simple little gadget that even people like me, who have little or no “fix-it” capabilities, can figure out how to use it and care for it. And, here’s the great part: it only cost $420, including shipping. For that price, I thought, why not give it a try?

I ordered one in early November. It came with easy assembly directions which I was able to accomplish quickly, without frustration and with my limited tool supply.

I’ve been really happy with the job this little harrow does on my footing. It smooths the arena nicely and the footing feels great—soft but not too deep. It digs it up to just the right depth and is easy to handle. I can remove it from the lawn mower and easily pull it around by hand. It’s a really smart design, and parts can be easily changed out if needed too.

There are a few downsides worth mentioning: my arena gets a lot of use—up to ten horses per day, so working the arena is something I do every day. Working the arena with my lawn tractor takes at least twice as long as doing it with a bigger harrow and my tractor. I’m also wearing out my little lawn mower, which is old and funky (and on its way out, anyway). I have also worn about an inch off of the spikes in the four months I’ve had it and will need to replace those before long. But I’m confident I can do that easily myself and the replacement spikes aren’t as expensive as on a big harrow. Finally, it doesn’t have the ability to dig the footing up very much; I’ll need a bigger harrow with greater strength to make my footing deeper. This hasn’t been a problem yet though, and for the money, I’m really happy with this little groomer.

I think the Handozer is a super choice for people who have an arena in their back yard that gets less use than mine does. But even for me, this little groomer has been a great interim tool. www.handozer.com

See this article in the April 2021 online edition: