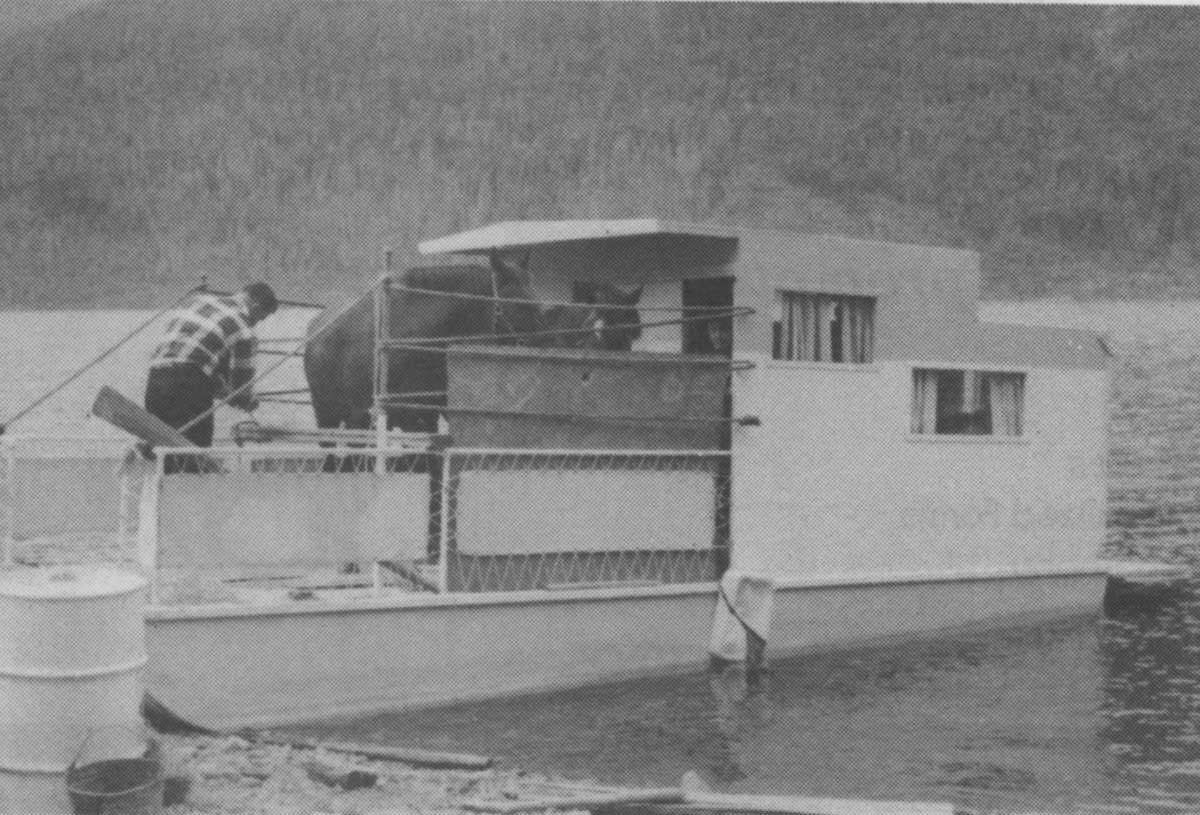 Any horseback trip to the high country is a big adventure. When you explore country that hasn’t been travelled for a quarter century, one feels like a pioneer and has twice as much fun.

In the mid-sixties, I had just started taking trips into the mountains. This was before the North Cascades Highway was built, and the western portion of the Pasayten was used only by wild animals. Al Starkenburg, my riding partner, once met a retired forest ranger who painted a glowing portrait of the country east of Ross Lake. He told about Three Fools Creek and Elbow Basin; and Al was determined to visit the area. He worked out the mechanics and decided to build an ark to transport the horses from the North end of Ross lake to Lightning Creek where we could pick up an old trail. 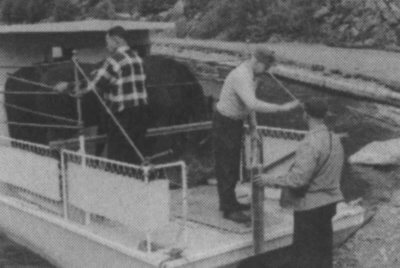 Al worked all summer on the project. Two pontoons, 24′ long, 2′ wide and 2′ deep were built, decked with plywood, and a small cabin was built on the stern. A small outboard motor pushed the craft which was designed to handle three horses. We later found that the vessel worked better with only two. Al and Jay Miller hauled the “Ark” to Ross Lake on an equipment trailer and made a test voyage without horses. When they found the craft seaworthy, we planned a trip for early September.

Al, Jay, Martin Matter and myself started on the journey with four horses. We cleared Canadian Agriculture at Sumas (Huntingdon), and stopped at Hunter Creek near Hope, BC for brand inspection. The road in from Hope was 35 miles of atrocious gravel which took two hours to drive.The trip to Lightning Creek took another two days, and the horses were skittish. My job was to calm the animals and have slip knots ready to pull if necessary. Martin and I unloaded, and Al returned for Jay and the other two horses. Late in the afternoon, we tied the Ark at Lightning Creek and made it to Deer Lick cabin before dark. We packed only one horse so that one man was on the ground at all times. On the steep hills, a rope on a saddle horn gave a boost.

Looking into Elbow basin for the first time was an awesome sight. We made camp in an old lean-to built by trail crews during CCC days in the “30’s”. We spent a week hunting and exploring. We travelled light, expecting to live partially off the land. Grouse and deer made a part of every meal, and a bog area just below the camp provided us with a profusion of wild blueberries for our breakfast pancakes. I was picking some one afternoon when I noticed an old board nailed to a fir tree. I walked over and found remains of a table and an old fire ring. Tacked to the tree was a hand carved sign, “FROG CAMP, JOE BILYOU, AUGUST 26, 1936.” I thought of taking the sign home but changed my mind. This appeared to be the last time anyone had visited the area. A forest service employee told us later that this country was once used for grazing large herds of sheep. 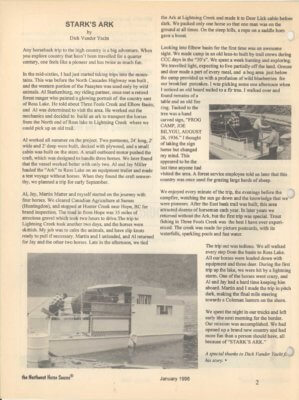 We enjoyed every minute of the trip, the evenings before the campfire, watching the sun go down and the knowledge that we were pioneers. After the East bank trail was built, this area attracted dozens of horsemen each year. In later years we returned without the Ark, but the first trip was special. Trout fishing in Three Fools Creek was the best I have ever experienced. The creek was made for picture postcards, with its waterfalls, sparkling pools and fast water.

The trip out was tedious. We all walked every step from the basin to Ross Lake. All our horses were loaded down with equipment and three deer. During the first trip up the lake, we were hit by a lightning storm. One of the horses went crazy, and Al and Jay had a hard time keeping him aboard. Martin and I made the trip in pitch dark, making the final mile steering towards a Coleman lantern on the shore.

We spent the night in our trucks and left early the next morning for the border. Our mission was accomplished. We had opened up a brand-new country and had more fun than a person should have, all because of”STARK’S ARK.”

A special thanks to Dick Vander Yacht

Published in the January 1996 Issue

Dick Vander Yacht lived in Blaine his entire life in Northwest Washington State. He resided for over forty years in the small Canadian border town of Blaine. A customs broker by profession, his hobbies included hiking, horseback riding in the north Cascade mountains, hunting, fishing and reading American Western history. The author traveled extensively in the Continental United States, Alaska, and Canada for business and pleasure. Exploring the once wild west and visiting may historical sites mentioned in his books fulfilled may of his lifetime dreams and provided the inspiration for his novels.Writing was another lifelong hobby he enjoyed, short story fiction and personal experiences for family and friends. His articles and short stories were published regularly in The Northwest Horse Source. Dick passed away in 2014.