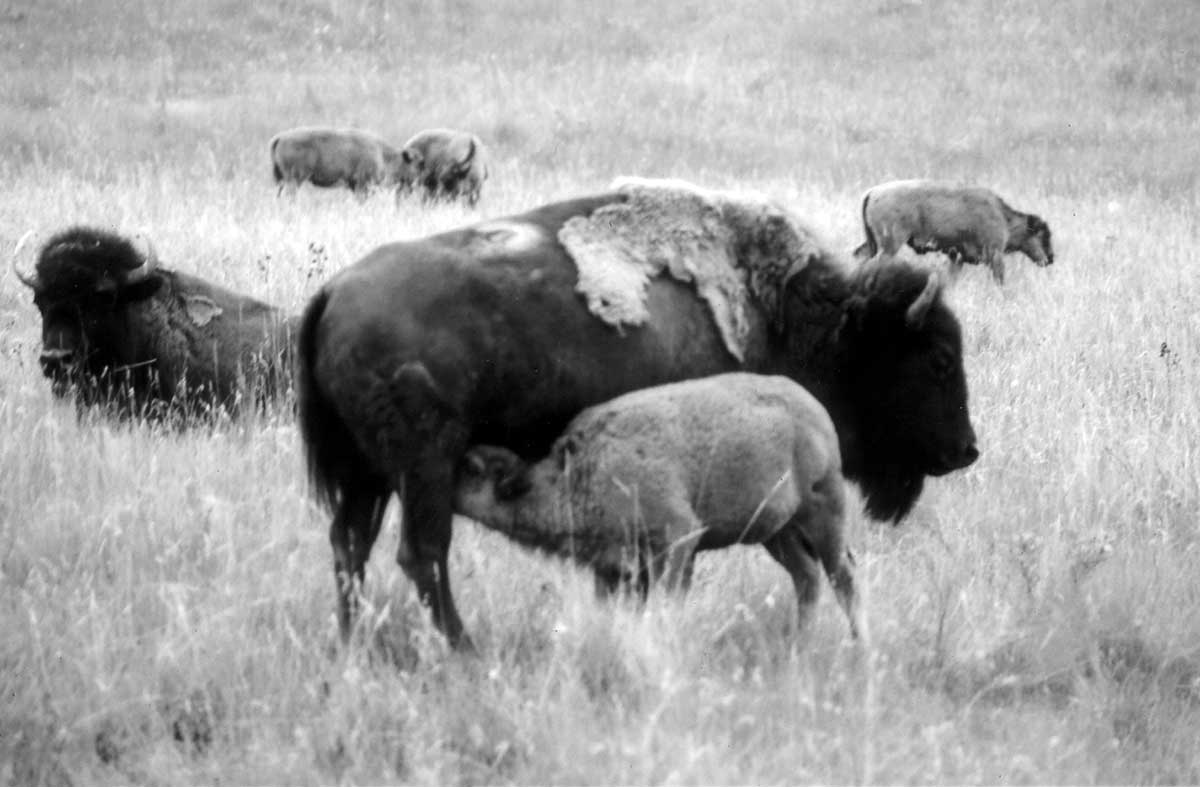 The nearly one ton buffalo tilted his head toward my horse and me. Below his sharp pointed horns, I could see one eye roll back in its socket as he warily studied us. Bison may look like bulky awkward creatures, but they are capable of instant running speeds of 30 m.p.h. and could easily tear open the side of my saddle horse with either sharp pointed horn. To make matters worse, twenty-five of his buddies stood behind him also watching us. Is this a ride in the old 1880’s West? No, it’s a ride that you can do today on the National Bison Range located near Missoula, Montana. 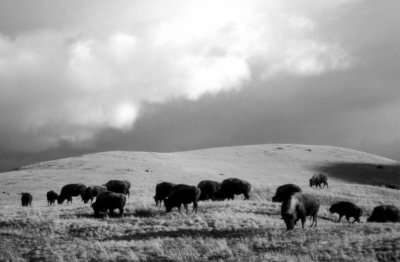 The National Bison Range is a 19,000 acre game preserve that is home to roughly 400 buffalo as well as herds of white tail and mule deer, elk, bighorn sheep and antelope. There is a fine visitor center-museum and a twenty-mile vehicle tour route through the range. However, there is only one time a year that you can ride your horse off the road into the back country of the Bison Range. The National Bison Range Trail Ride is usually held the third weekend of May. For a Twenty dollar fee one is provided with a camping spot the night before, a rootin’ tootin’ western band, a guided twelve to fifteen mile ride through the Bison Range and a barbecued roast beef lunch complete with ice cream on the very top of the mountain range. The ride is limited to 300 riders and usually sells out by the ride date.

The night before the ride is a special time. Riders gather together to camp and enjoy one another at a local ranch. We wander around checking out the different tents, campers, motor homes and horse trailers. It’s a lot of fun seeing familiar faces, new horses, as well as new faces and familiar horses! Kent and I exchange pleasantries and horse stories with folks who are relaxing and kicking back with various liquid refreshments.

One memorable character that we look forward to seeing is a rail-thin, eighty year old, stringy ol’ cowpoke called RD. RD has been coming to the ride every year for the past thirty. He rides a twenty-five year old mare and treats her like a queen. Matter of fact, his kindly treatment of his horse almost got him in trouble with the law. Awhile back he was trailering his beloved mare down a winding highway and was pulled over by the state patrol. The patrolman told RD that there were vehicles lined up behind him and he had passed by some turnouts and hadn’t given the cars and trucks an opportunity to pass him. When asked why, RD replied, “Those were rough turn-outs. Didn’t want to jostle up my horse. She’s an old gal, and has given me many smooth rides. Wanna do the same for her.” A look of understanding passed between the young patrolman and the old cowboy and he was sent on his way without a ticket. RD’s eyes twinkle as he tells the story. 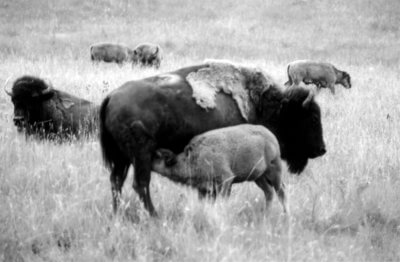 We finish our meandering and visiting and look forward to a rousing honky-tonk band. I don’t know how the organizers of this ride do it, but somehow they always manage to get a band that gets everyone to beboppin’ hoppin’ and sometimes even dancing! This year the band is stationed on an old hay wagon that looks very picturesque as the sun sinks in the red Montana sky. It’s great fun to watch rugged cowboys become poetry in motion as they twirl and two-step their way on the dirt floor under a slowly darkening sky.

As was demonstrated by our friends Jay and Jane, some folks will go to great lengths to attend this ride. On the drive to the Bison Range they had to go over Lookout Pass. While climbing the pass their truck engine erupted in flames. Quick action by friends caravaning behind them saved their horses, horse trailer and camper. The truck was totaled. True-blue friends offered to go home and get another truck for Jay and Jane to use. Jay and Jane transferred their camper and horse trailer to a friend’s truck and made it to the camp in time to dance the evening away. That’s got to tell a person something about the caliber of people who attend these rides!

The ride is something else! As far as I can see, the three hundred riders are stretched out in front of me and behind me. They wind around the distant mountains like a choker chain. I enjoy hearing the friendly banter and checking out the different outfits of the riders and their horse tack. Some of the horses are wearing orange ribbons in their tails, alerting other riders to respect their space. Hearing shouts, I turn in the saddle just in time to see seven antelope bound through the line of riders stretched out behind me. Very beautiful sight! 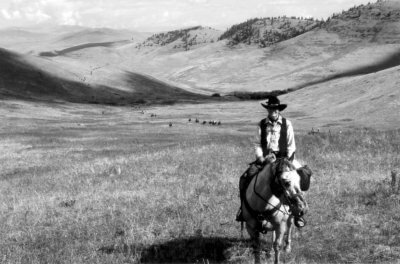 Finally we reach the Jocko River that cuts across the Bison Range. My horse, Buckwheat, is very thirsty so we stop for a drink. As is Buckwheat’s custom, he submerges his head into the river until his eyes are just above the water and blows bubbles through his nose. A little grizzled man riding a mule stops beside me and says, “Now there’s a horse that knows how to drink!” We just sit there and laugh together, enjoy the camaraderie and listen to the slurping of the horses.

Every year we are led on a different route. This year we were led through a variety of terrain. We rode up some very steep hills and along side hills overlooking scenic beauty. It’s difficult to describe how fortunate one feels to marvel at brightly colored wildflowers dancing in the wind and in the distance see the stately Mission Mountains with their mantle of glistening snow. To use our friend Jay’s expression, “It doesn’t get any better than this!”

After about four hours of riding we finally stop for a scrumptious lunch. Even though last year’s lunch was great, this one might even be better. BBQ’d beef, baked potato, rolls, salad, baked beans and even ice cream, all served under a bright blue Montana Sky.

This Bison Range that we were traveling on is one of the oldest game reserves in the United States. It was established in 1908 by the American Bison Society under the leadership of Dr. William T. Hornaday. There was a justified outrage of public sentiment over the senseless, wasteful slaughter of bison. By 1900 only twenty bison were known to exist. If the Bison Range had not been established through the efforts of President Roosevelt and naturalist Dr. Hornaday, bison probably would only exist today in the pages of books.

Well, it’s about 3 p.m. and we’re riding back to camp. Saddle-sore, but with a good sense of accomplishment, we bid good-bye to friends, both old and new. As we head down the highway, I can see the distant herds of bison tucked beneath the hills of the Bison Range. I find myself looking forward to next year when once again, I can ride with the bison and camp with the cowboys. 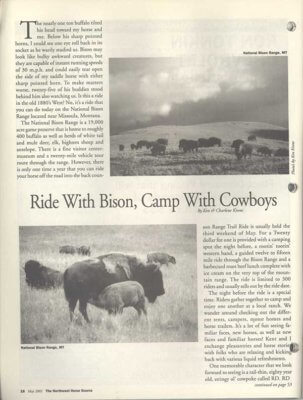 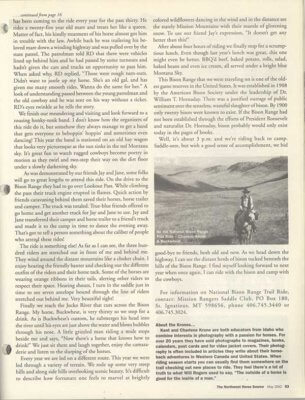 Kent and Charlene Krone are both educators from Idaho who combine interests in photography with a passion for horses. For over 20 years they have sold photographs to magazines, books, calendars, post cards and for video jacket covers. Their photography is often included in articles they write about their horseback adventures in Western Canada and United States. When riding season starts you can usually find them somewhere on the trail checking out new places to ride. They feel there’s a lot of truth to what Winston Churchill said, “The outside of a horse is good for the inside of a man.”

Published in May 2002 Issue