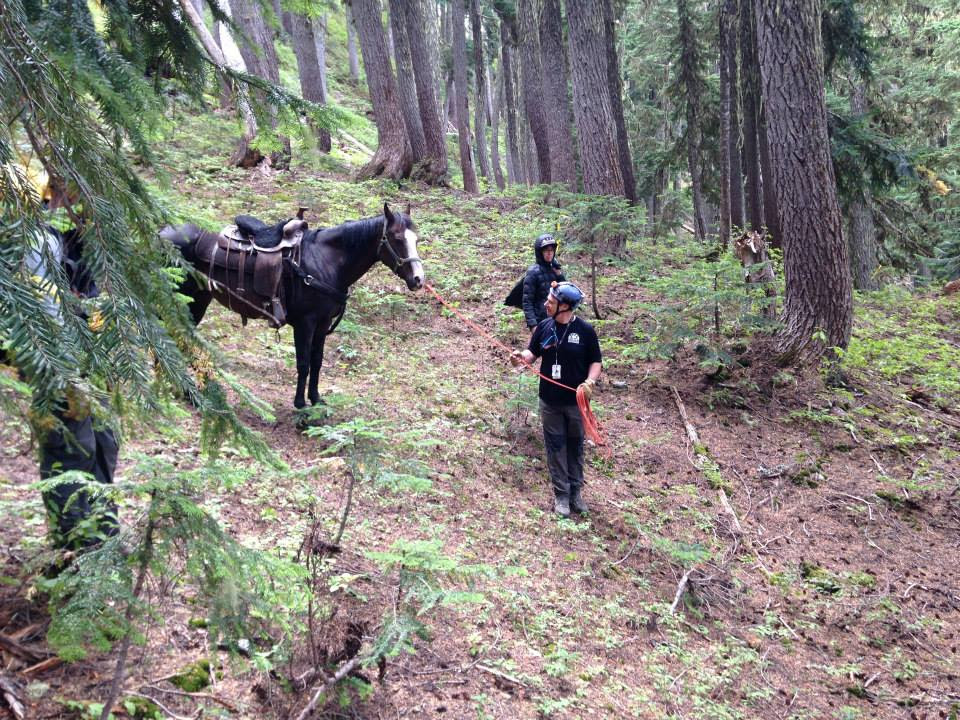 On August 28th, we deployed very early in the morning to help with a horse down an embankment. The call originally came to search and rescue as a ‘rider injured/down’, so Seattle Mountain Rescue (SMR) and Explorer Search and Rescue (ESAR) deployed in the dark the previous evening to head up the 4.5+ miles up the beginning of Section J of the Pacific Crest Trail at Snoqualmie Pass.  The teams went to check on the owner who was shaken but uninjured, evaluate the horse’s situation, as well as escort the rider’s friend up with overnight supplies for the owner who was reluctant to leave her horse.

The horse, named Tia, appeared to be uninjured and in good health, and the rider seemed alright as well, so for safety reasons they determined they’d try early in the morning to try to extract the horse via Plan A and call for more help if this plan was unsuccessful. The ESAR and SMR responders and the owner spent a cold and damp night camped near the horse.

Plan A is almost always to try to walk the horse out through a shallower route. Plan B was to help the horse descend 20 feet down the steep slope to level ground with the help of a rear assist. Plan C, if neither A nor B were successful, was to sedate the horse, wrap her in our rescue glide, set up a rope system, and haul her up the embankment.

Although Tia had no obvious injuries, she was unwilling to move in the morning and the deployment’s Incident Commander issued the order to call us in. We’d been made aware of the situation the night before and had members ready for the call at 5 a.m.

Nine WASART members headed out and all met at the trailhead about 9:30 a.m.  Already on site were other SAR units including the Incident Support Team, which handle radios and paperwork, and Dana Westerman, DVM, who was just setting out to attend the horse. (As an aside, if you have a vet who is willing to hike over nine miles round trip to attend a patient, you know you have someone amazing.)

We took all the equipment we thought we’d need from our equipment truck in case it came to Plan C, which included heavy rope bags and the even heavier and awkward Rescue Glide (see the green item in the photos) that is one of our number one tools in rescuing livestock.

As we left we were advised that Northwest Horseback Search and Rescue Team (NWHSAR) was being deployed as well, which meant additional equipment that may be needed could be packed in, and out, on the horses.

The hike up meant finding a way to make the awkward Glide less awkward, which ended up being to bend and strap it into a taco shape and have one or two people pulling from the front and another in the rear holding onto a tag line to keep it from drifting down hill. The hike itself was always at an incline or a decline and the section we traveled was about 2500 elevation gain.

At the top, we found all the agencies working together to make a plan that would be safest and best for everyone involved. Tia was about 100 feet down a 45 degree slope. Plan C was determined to not be safe, as the trail was too narrow for the horse to be removed from the Rescue Glide. Fortunately, it looked like Plan A combined with Plan B would work best, where the horse could be walked out at the route with the least incline after being helped down the first 20 feet with the rear assist.

Crews began to find that path and mark it with grid tape, which is a florescent ribbon used for marking trees. Other responders cleared logs and other obstacles with chainsaws, tools, or brawn while WASART responder Juan Carlos B. earned Tia’s trust and coaxed her forward a tiny step at a time. She was hesitant and shook with each step but gradually became more confident as she moved forward.

Much of the team followed at a distance to not spook Tia but to be on hand in case they were needed as well as collect the grid tape markers. Tia and the responders walked through the woods and clearings and eventually met up with the trail about a mile downhill of where they started.

Tia, her owner, handlers, and Dr. Westerman continued back to the parking lot, and the rest of the team hiked back up the trail to help carry out the remaining gear. Most was loaded onto the pack-horses, for which we were very grateful – we were all very tired at that point. The one piece we had to carry down was the Rescue Glide. It was too large and made too much noise and would likely spook the patient pack-horses, so we took turns wrestling the glide back down the hill.

At the bottom, we were met by The Soup Ladies, a non-profit volunteer organization which is often called in to serve amazing home cooked soups and meals to responders. While we recovered with soup and bread, Tia munched on hay and looked to be doing well.

This deployment took the combined efforts of over 65+ responders from the expert leadership of King County SAR Coordinators, Deputy Joe Merclich and Deputy Ed Christian, to members of King County SAR units: ESAR, SMR, IST, NWHSAR, 4×4 and King County Search Dogs as well as the WASART members, Dr. Dana Westerman, and Tia’s owners. It is heart-warming that so many people are willing to give of their time and effort to come to the aid of a possibly injured rider and a possibly injured horse. WASART is proud to partner with these units and to lend our expertise where and when needed.