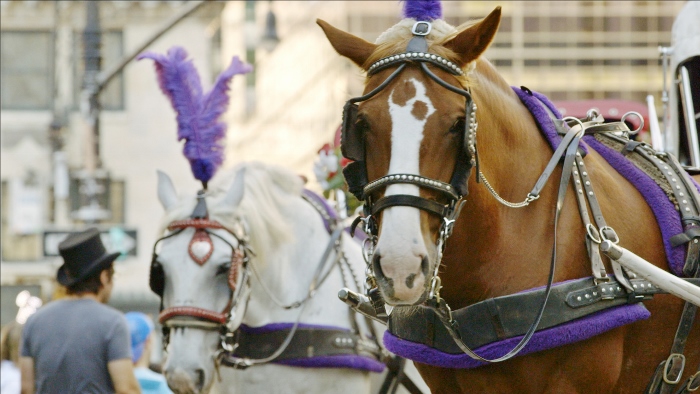 “This is a very thorough documentary about the carriage horse industry in New York City. I’m shocked at the special interest groups and government corruption in the works to rid New York City of such an important part of its culture and history. It’s a sign of the times and the fact that all horse owners may be faced with no longer being able to ride or drive their horses if these special interest groups keep chipping away at our leadership until they win the battle. The lack of understanding about horse ownership is appalling. We all need to pay attention and lobby for our right to ride and drive our horses.”

Debuts in Theatres May 11, Digital VOD Platforms May 15th

THE LAST HORSEMEN OF NEW YORK is a documentary feature that follows leaders of New York’s historic horse carriage industry as they fight Mayor Bill De Blasio, who had vowed to eliminate them on day one of his term. Haverstick’s cameras captured the struggle for two years, with the working-class carriage drivers (and their working-class equine charges) under assault from animal rights activists on one side and politicos funded by billionaire real estate developers with an eye on the horsemen’s West Side stables on the other. Christina Hansen and Stephen Malone, the two industry spokespeople, are thrust by necessity into the limelight and find themselves in a bare-knuckle brawl in a city known for political hardball. The ongoing saga frequently captures the headlines of every New York newspaper and has even launched investigations into the mayoral election and financing surrounding this issue—with revelations continuing to this month. Di Blasio himself has retreated from the issue, claiming the City Council won’t back a horse ban. With a political stay of execution and joined by Liam Neeson, the carriage drivers and their horses remain on the street, but in a changing world, the question remains: For how long? The film’s exploration of money and influence in elections is even more timely now than when filming began.

Haverstick says, “We’re delighted that audiences will get to see THE LAST HORSEMEN. While the film was years in the making, the story is very much of today. We thank Freestyle Digital Media for bringing the film to a national audience.” She continues, “The horse carriage controversy captivated New York while our cameras followed the action of this colorful controversy for over two years. We filmed in vérité style as the two elected spokespeople for the carriages fought, and eventually won, their battle against City Hall. In this era when elections can be bought and sold by foreign or domestic powers, this film offers a sober warning of how easily electoral interference can be accomplished by special interests. It also adds a much-needed glimmer of hope that our democratic system is not yet beyond repair.”

Mary and Michele started Haverstick Films many moons ago after they met and realized their love of film and music was a perfect match. They put themselves though a self-taught version of film school before there were many film schools and during the birth of the era of independent film.

From the start the marriage of music and celluloid was central to the collaboration. Michele was already an accomplished composer who was pioneering electronic music on her Atari ST system. Eurock Magazine called her “America’s premiere female synthesist” and her first album EYECHANT became a cult hit which is highly prized on the original vinyl. This work is so highly collected now that it has been picked up by FREEDOM TO SPEND on RVNG records and was re-released in 2017. It was also Michele’s music that accompanied the logo IDs for the fledgling TV channel, MTV.

Mary honed her craft on these early projects by wearing many hats – director, writer, cinematographer and editor – all roles she still enjoys. After a series of shorts, the duo tackled two shoestring features: SHADES OF BLACK and CHRISTMAS DINNER, which both achieved festival play and distribution. SHADES was one of the earliest portrayals of a same-sex relationship on screen, and the film circled the globe from LA to HONG KONG playing gay and lesbian film festivals way before that was seen as cool. Their follow up feature CHRISTMAS DINNER challenged racial barriers and had its world premiere at the Brooklyn Film Festival. In the film, a white family contends with a popular Christmas movie featuring a black female Santa Claus as well as their own addition of an adopted black child. The film features some groundbreaking in-camera 16mm motion effects using computer frame rate control and was the first 16mm feature to employ these techniques.