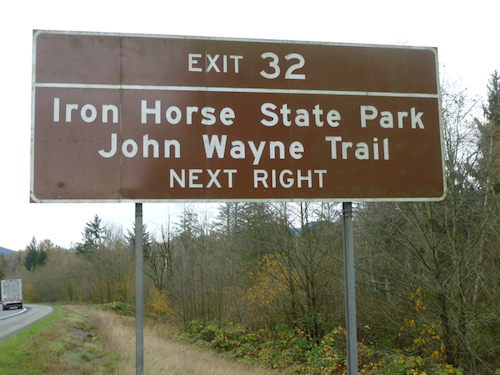 History and a Struggle for Identity

The John Wayne Pioneer Trail follows the route of the old Milwaukee Railroad. It runs east to west across the State of Washington, from the Cascade Mountains to the Idaho border. Most of the route is administered by Washington State Parks.

The Milwaukee Railroad built the Chicago to Seattle line between 1906 and 1909. The last train ran in 1972 and the route was abandoned in 1980. There was immediate controversy on how to use the right of way. Chic Hollenbeck, founder of the original John Wayne Pioneer Wagon and Riders group (JWPWR), spearheaded the effort to convert the right of way to a trail.

Heading east from Rattlesnake Lake near Seattle, the trail edges its way up the Cascade mountains, traverses the range through a 2.3-mile-long tunnel, winds along the edge of Lake Keechelus, passes through irrigated farmland and descends down a series of nine switchbacks to the Columbia River. The trail continues east through wetlands, cattle ranches and scablands, ending in the Palouse wheat fields in the small town of Tekoa.

The western segment of the trail is in Iron Horse State Park. There are marked trailheads, a well-maintained surface, controlled access and good signage. It is characterized by mountains, high trestles, irrigated farmland and high desert. The eastern segment is more primitive. The trail crosses large pastures and open rangelands and bisects small ranching communities. The Columbia River divides the two segments.

The trail is open to all non-motorized uses. Its gentle gravel surface is popular with cyclists, hikers, birders, horseback riders, teamsters and cross country skiers. The western segment, which is closer to Seattle and more accessible, is more heavily used than the eastern segment.

This year the cross-state ride is from May 18 to June 3. The ride is open to everyone. Most participants are either horseback riders or teamsters. There are usually one or two bike riders and a few hikers. It’s an excellent wagon trail, with gentle grades and a firm roadbed. You can learn more about the ride and how to become involved by visiting the JWPWR website: www.jwpwr.org

More than thirty years ago, JWPWR organized and lobbied for a name for a non-motorized trail we were putting together from the remnants of a bankrupt railroad. We were horsemen and women with a mission to create a place where we could travel with horses and mules, wagons, carts, and buggies, without fear of motorized vehicles.

The name that eventually stuck was The John Wayne Pioneer Trail. The reason was simple – name recognition and association. We loved the idea of being able to ride long distances, to head east and ride out of the mountains, cross the Columbia, and ride in the desert. We wanted to see the wheat fields and the Palouse hills from horseback. We wanted to get to know the people working the fields, herding the ranches, and picking the fruit and vegetables. Here was a place that felt western, remote, secure, and welcoming. John Wayne could have ridden here and John Ford could have directed his western movies here.

The signs along I-90 are all changed now to Iron Horse State Park – except one. It hangs over by North Bend on the side of I-90 and stands as a lone sentinel to what was. Washington Parks has replaced the other signs.