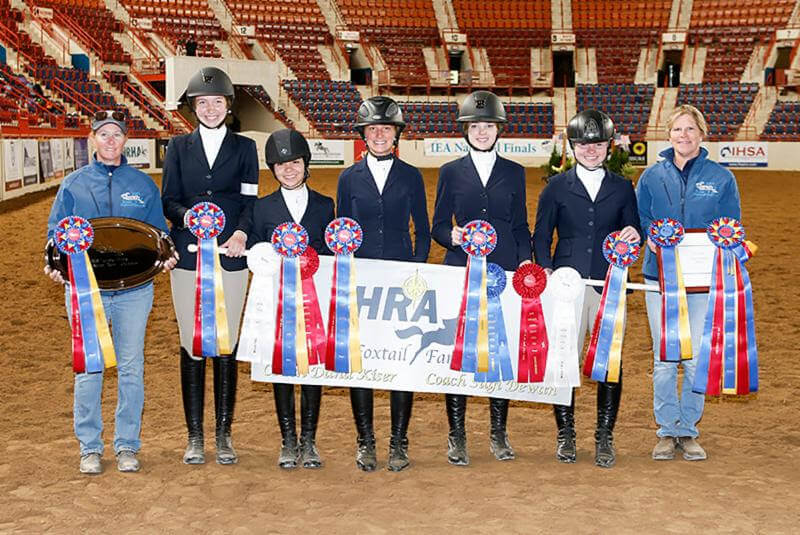 Monday, April 29, 2019 (Columbus, Ohio) – The Interscholastic Equestrian Association (IEA) played host to over 350 young riders in grades 6-12 at the iconic Holland Arena in Harrisburg, Pennsylvania – home to the Pennsylvania National Horse Show. From April 26-28, riders from across the United States showed outstanding poise, professionalism, sportsmanship and equestrian ability as they competed in both individual and team classes over fences and on the flat to determine the winners. These riders, made up from 10 Zones across the country, vied for national titles and to be among the top eight riders in their classes. The finalists represented 191 teams from a total of 10,567 eligible hunt seat riders and 1,382 teams. Individuals and teams participated in multiple competitions during regular season shows, regional finals and zone finals to qualify for the National Finals competition.

The IEA utilizes a draw-based format that requires riders to compete in unfamiliar tack on unfamiliar mounts: therefore, they draw their horses the day of competition and enter the arena after a brief, if any, warm up.

Stepping back into the spotlight and rising to the top of this year’s National Finals was 2019 Leading Hunt Seat Rider, Riley Babb from TerryAllen Farms (Zone 1) in Terryville, Connecticut. Babb secured a national title in 2018 when he won the Varsity Intermediate Over Fences Individual class. The IEA Leading Rider is selected from the highly competitive Varsity Open Championship class, where riders compete in two phases – over fences and on the flat. Beginning with 12 riders, Judges Randy Neumann and Phillip Long (both USEF “R” judges from Rougemont, North Carolina) whittled down their top choices with additional difficult testing of the top several riders. Joining Babb in the spotlight was Reserve Champion Varsity Open Championship rider, Olivia Brown from Little Clovelly/C-Line Stables (Zone 3) in Easton, Maryland. Babb received $1,000 in Scholarship money from IEA as well as a host of awards and prizes from generous sponsors as well as opportunities for further competition and training with the National Collegiate Equestrian Association (NCEA). Babb is also the first male rider to earn the Leading Hunt Seat rider title. He is coached by Samantha Borkoski.

Since its creation, the IEA has relied on the support from its many volunteers to assist in the success of the organization. The Volunteer of the Show award was presented to Maria Vaughn of Foxmoore Equestrian Team (Zone 2). Maria showed outstanding support to the IEA when she volunteered herself to single-handedly take care of four horses all week whose horse provider could not be in attendance.

The 12th Annual Timothy J. Boone Lifetime Achievement Award was presented to Emily Zientek-David from Saint Clairsville, Ohio. David is an IEA Steward and Zone 11 Administrator. Additionally, she serves as the Zone Administrator and backbone of the newly emerging IEA Dressage Program. David served as one of the 2019 Hunt Seat National Finals Stewards and has held multiple posts with the IEA for nearly two decades.

“Every year I am amazed at the outstanding quality of the horses brought to this show by our horse providers and their willingness to share these fine animals with our riders,” said Roxane Durant, IEA Co-Founder and Executive Director. “We realize the amount of work involved in hauling and caring for horses at a National Finals and we are again so appreciative of the opportunities for our kids to ride such quality mounts.”

About IEA:
Now approaching its 18th year, the IEA has nearly 14,000 members across the United States riding and coaching Hunt Seat, Western and Dressage disciplines. The non-profit (501(c)3) IEA was organized to promote and improve the quality of equestrian competition and instruction available to middle and secondary school students and is open to public and private schools and barn teams. There is no need for a rider to own a horse because the IEA supplies a mount and tack to each equestrian for competitions. Its purpose is to set minimum standards for competition, provide information concerning the creation and development of school associated equestrian sport programs, to generally promote the common interests of safe riding instruction and competition and education on matters related to equestrian competition at the middle and secondary school levels.
For more information, please visit www.rideiea.org