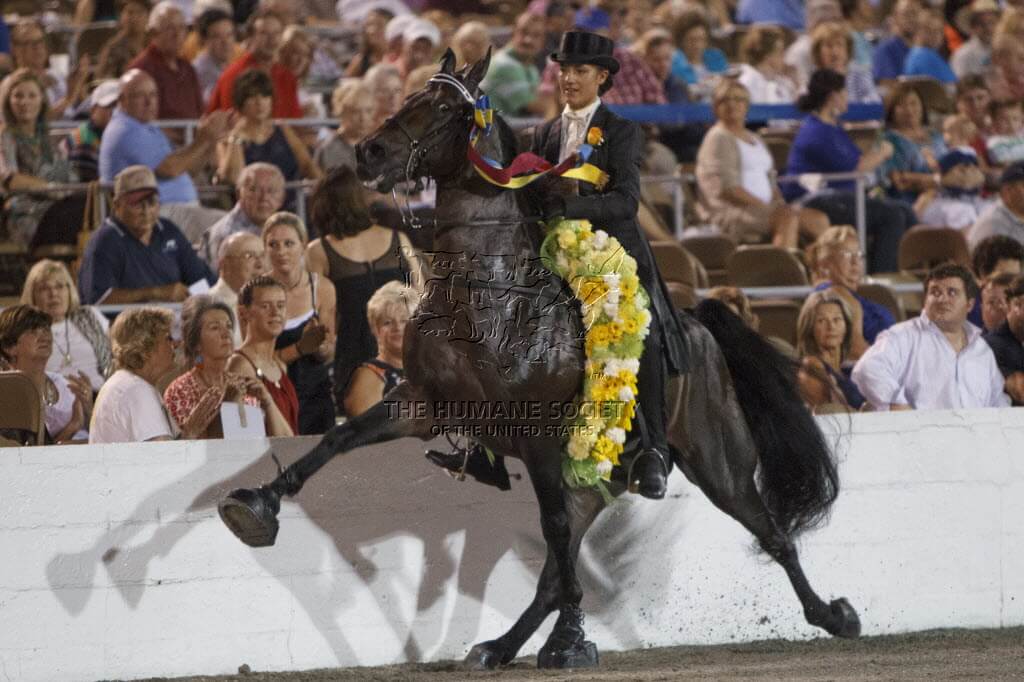 The Humane Society of the United States and Humane Society Legislative Fund applaud the reintroduction of the Prevent All Soring Tactics (PAST) Act in the U.S. House of Representatives today by Reps. Steve Cohen, D-Tenn.; Brian Fitzpatrick, R-Pa.; Jan Schakowsky, D-Ill. and Vern Buchanan, R-Fla., with 207 other original cosponsors.

This bipartisan bill targets the wanton cruelty of horse soring, which is perpetuated by the “Big Lick” faction of the Tennessee walking horse show industry. Sens. Mike Crapo, R-Idaho., and Mark Warner, D-Va., introduced the Senate version of the bill, S. 2295, in June with 46 other original cosponsors.

The PAST Act amends the 1970 Horse Protection Act and aims to eliminate the failed system of industry self-policing, strengthen penalties against the soring of horses and ban devices that are integral to the soring process. These devices include chains that are used in combination with caustic, burning chemicals to inflame the horses’ tender ankles. Another tactic that would be banned is the use of tall, heavy stacked shoes that are attached to the horses’ hooves, causing tendon and joint damage and obscuring the painful cutting or grinding of the animals’ delicate soles and insertion of hard or sharp objects to exacerbate the torment.

This bill passed the House in July 2019 by a wide bipartisan margin of 333-96, largely on the strength of ongoing evidence of cruelty in the training of these horses. The winning trainer and rider of the World Grand Championship class at this year’s Tennessee Walking Horse National Celebration, John Allen Callaway, recently served a federal disqualification for the soring of horses—a distinction also shared by his brother Bill and at least three other riders who compete in the same division.

Other top-winning trainers have histories of citations for violating the federal Horse Protection Act, including 13 of the 15 current members of the Walking Horse Trainers Association board. Three of those 13 are currently on lengthy federal disqualifications meant to prevent them from participating in horse shows, and the other 10 have previously served disqualifications by the U.S. Department of Agriculture and/or the walking horse industry for alleged violations of the law.

Together, they demonstrate the exact reason why this bill is long overdue for passage. For too long trainers in this industry have been rewarded for their deliberate cruelties.

“There should be no debate over ending the senseless cruelty of soring—it’s animal abuse of the worst kind, and it needs to stop, period,” said Kitty Block, president and CEO of the Humane Society of the United States. “The PAST Act is endorsed by every major horse industry, veterinary, law enforcement and animal protection group in the country, and it’s time Congress put politics aside and pass this commonsense bill.”

“There is simply nothing good to be said for a sporting event that relies on the deliberate torment of horses in the training barns to produce the desired high stepping gait in the show ring,” said Sara Amundson, president of Humane Society Legislative Fund. “Soring is a furtive cruelty that we can root out altogether with this measure, in this Congress. No more self-policing by participants. No more reliance on devices integral to soring. No more anemic penalties. We’ve been waiting half a century for the straight shot that stops this wicked practice, and Representatives Cohen, Fitzpatrick, Schakowsky and Buchanan have given it to us. The many legislators who have backed this bill have put their political weight on the right side of history and put the House in position to save the Tennessee walking horse industry from its scofflaw elements. We’re banking that their bipartisan push for the PAST Act, along with the companion bill that Senators Crapo and Warner introduced in June with almost half the Senate as cosponsors, will be the coup de grace that puts soring out to pasture forever.”

“The ‘Big Lick’ faction of the Tennessee walking horse industry has shown time and again that it has no qualms about rewarding those who inflict heinous cruelty on their animals for the sake of a blue ribbon,” said Keith Dane, senior director of equine protection for the Humane Society of the United States. “Congress must act now to amend the law passed over a half century ago, to close the loopholes that have allowed soring to fester in the shadows—the dark, dirty secret that is a stain on the U.S. horse industry.”

“The practice of soring, which is the intentional infliction of pain on horses’ feet and legs using caustic chemicals, chains, weighted shoes, hard objects, cutting, and other gruesome techniques to force them to perform a pain-based artificially high-stepping gait known as the ‘Big Lick,’ is completely unacceptable, inhumane and unsportsmanlike,” said Congressman Cohen. “Unfortunately, the practice has marred the Tennessee Walking Horse and related breeds for more than six decades. I am proud to reintroduce the PAST Act to finally eradicate this indefensible practice and show that Americans will treat animals humanely.”

An analysis was conducted by the Humane Society of the United States of data provided by the USDA on the rate of Horse Protection Act violations detected by agency veterinarians vs. industry inspectors, many of whom have conflicts of interest. During the years 2018 to 2020, on average:

Supporters of the bill are pressing House Speaker Nancy Pelosi, Senate Majority Leader Chuck Schumer and Senate Minority Leader Mitch McConnell to get the bill over the finish line this Congress.

Secretary of Agriculture Tom Vilsack could also take vital action to end soring by reinstating a 2017 USDA rule amending his agency’s Horse Protection regulations. That rule attracted over 100,000 supportive public comments and sweeping bipartisan congressional support. USDA finalized the rule during Secretary Vilsack’s previous tenure as secretary during the closing days of the last administration, but never implemented it. The ongoing use of devices integral to soring and failure of industry self-inspection programs—the very conditions that drove that rule forward—are as pervasive today as they were four years ago, as the USDA’s own data makes clear. Secretary Vilsack should instruct his agency to move swiftly to reinstate the rule before another show season begins next year, sparing thousands of horses from unspeakable suffering.