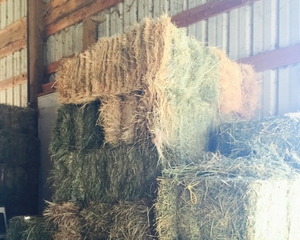 The cooler nights and earlier sunsets are signaling the change of seasons. As sad as it is to see summer end, I’m happy to say goodbye to the flies. You’ve likely already stockpiled some hay in preparation for winter, but before you jam your loft, stall or shed full of hay, take a little time to consider your storage to ensure your hay stays in good condition through the winter.

The facility where I board provides a shared hay storage space for boarders. I’ve noticed that dust and small pieces of hay fill up the spaces under the pallets where the hay is stored. Soon the bottom of the haystack isn’t really protected from moisture by the elevation of the pallet, as the hay comes in contact with the debris filling the space under the pallets. That lack of elevation and air circulation can allow moisture from the ground to wick up into the bottom hay bales.

Moisture in hay can result in mold and mildew, rendering the hay unfeedable. Prevent the loss of hay (and money) by making sure that your pallets are clear underneath to allow for air circulation. Keeping the space underneath the pallets clear also acts as a deterrent against nesting animals who might take up residence.

Mice, rats, and larger rodents are potential carriers of illnesses that can infect horses. You can help deter unwanted tenants in your barn using the same methods you use in your house: patch any holes, keep doors closed, and keep grain and other feed items cleaned up. Many people are fans of barn cats as mouse and rat catchers. Gopher snakes can also be helpful in controlling rodent populations around barns, although they may give you the willies. You can also set bait or mechanical traps, but be careful that no children or pets will access the bait or traps.

As you stack the hay, leave a little room between bales to provide space for the bales to breath and for moisture to dissipate. You should also keep moisture within the barn at a minimum by patching any holes in the roof and large gaps in walls to protect hay from drifting snow or rain. If you live in an especially damp climate and have the room, you can put a layer of straw bales as the base layer to your haystack, which adds an additional layer of protection against moisture wicking up from the ground. Leaving plenty of room over the top of the haystack is also important as that space allows moisture to dissipate from the hay.

If you open a bale and it smells off or has areas of discoloration, discard the hay. Mold spores can travel far beyond the visible spoilage. Moldy hay may cause colic or long-term respiratory issues. The moldy hay should not find a new life as bedding either, as the mold spores will still present a health risk for your horses.

With proper storage techniques, hay that is kept dry can last several years. The general rule is two years, but studies have shown that hay stored in a shed for 20 years only saw a dry matter loss of 4% to 7%. When stacking hays of different ages, be sure to rotate older hay to the front of the stack to use first. If you have an older stack of hay that looks and smells good but you’re curious about the nutrition content, you can send it in to be analyzed. Testing can determine moisture, protein, mineral, sugar, energy content and more. DHIA (321-352-2028), Dairyland (320-240-1737) and the Minnesota Veterinary Diagnostic Laboratory are three agencies which reportedly provide such testing.

Wherever you store your hay, and however much you’re storing, taking a little extra time and precaution will save you time, money, and peace of mind in the long run. Best of luck for well-ventilated, dry hay storage this winter. 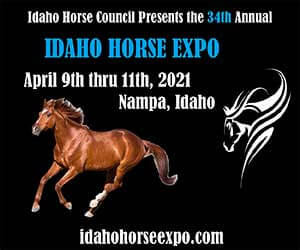