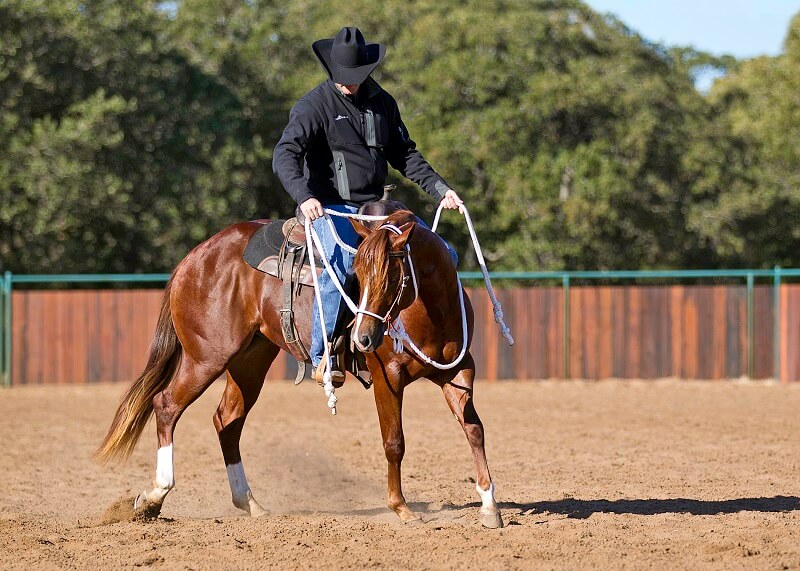 Symptoms Of A Cause

The majority of horse “problems” aren’t really problems at all; they are really just symptoms of a cause. Ninety-five percent of all the problems you will ever have to deal with as a horse owner will fix themselves if you do the groundwork and earn your horse’s respect.

Most people think that their horse’s problem (biting, bucking, rearing, pawing, etc.) is the real issue, but it’s not. What most people think is a problem is nothing more than a symptom of a cause. But people get so focused on the horse’s bad behavior that they can’t see what is actually causing it.

It’s like a weed growing in the ground. You can chop it off with a weed whacker, but two weeks later it will grow right back because the root system is still intact. If you really want to kill the weed, you need to pour weed killer on it to kill the root system. When you kill the roots, the weed will die. It’s the same thing when training horses. Any problem that a horse could possibly have comes from either a lack of respect, out of fear, or, in some cases, both.

You might say, “Well, Clinton, I’m new to horses. I don’t understand where my problem is coming from. I don’t know if it’s a lack of respect, or if it’s a fear-based issue.”

Here’s the good news – it doesn’t really matter. As long as you do the groundwork, you’ll actually be working on both categories. 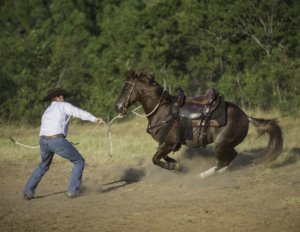 The sensitizing exercises (moving the horse’s feet forwards, backwards, left and right) get the horse respectful and teaches him to use the thinking side of his brain because he’s constantly having to move his feet and change directions. The desensitizing exercises will teach the horse not to be fearful by exposing him to various types of objects that move and make a noise. If you build a solid foundation, a lot of problems will just disappear. Unfortunately, most people can’t see past their problem to see the cause.

The reality is when you start working with your horse, he will tell you where your problems are. If it’s a lack of respect, he will give you resistance when you go to move his feet. If it’s a fear-based problem he will react badly when you work on any desensitizing exercises. If you just start the Method, he will tell you where he needs you to help him and spend more time. You just have to be willing to listen and put in some effort, that’s all.

It’s the same thing with horses. Most people’s problems are nothing more than symptoms of a cause. And, luckily, groundwork (moving the horse’s feet forwards, backwards, left and right) is the cure-all answer. Even if a horse is giving me problems under saddle, I will still come back to the ground to fix it because the groundwork allows me to fix the cause of the problem in a safer position.