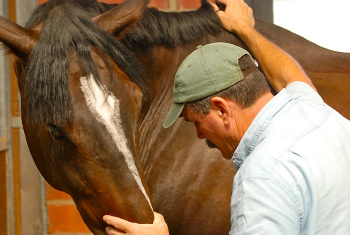 Have you ever noticed in training that it is often easier to do lateral work, such as bending, turning, and lead changes, better in one direction than the other? This may be due in part to a horse’s natural predominance toward one side or the other; what is sometimes called “natural crookedness,” or being “right or left-eyed predominant”.

Horses are the same as humans in this respect. Between 85% to 90% of humans are naturally right-handed. However, the difference between the two is that horses have an extra set of legs, so that this predominance shows up in a diagonal, with a majority being “right front-left hind horses.” They generally are a little more comfortable on the left lead, and bending and turning to the left. They also put more load on the right front, and left hind diagonal. Consequently, over time they accumulate more tension in the right poll and upper neck compared to the left, and are tighter in the left hind in the sacrum, gluteal and hamstrings. This predominance and tension may be very strong in some horses, and less so in others. In a nutshell, the majority of horses fit the pattern of right front-left hind tension.

“Why is this important in the training and performance of the horse?” Often this natural imbalance can be worked through with training, basically by strengthening and conditioning the weaker diagonal, and suppling the stronger diagonal. However, if you are having trouble, he may be trying to tell you that there are physical problems showing up that are associated with this natural imbalance.

If your horse continues to tell you something is wrong, the first thing to do is to have the possibility of injury or impending injury ruled out by a veterinarian. Once a vet issue is ruled out or treated, and the horse is still trying to tell you that something is wrong, the next place to look is in the body. This asymmetric tension itself can create problems in training and performance as it accumulates to a higher and higher degree. In this case, it will make both your job, and your horse’s, easier if you do something to release tension and alleviate the soreness as it shows up in training, rather than trying to push through it. Recognizing what the horse is telling you before it becomes a veterinary issue or something serious will save you trouble down the road.

Masterson Method® bodywork techniques can help the horse owner, trainer or therapist pin point the tension before it becomes a medical issue. By applying Masterson Method® simple techniques you can access that part of the horse’s nervous system that will reveal certain signs that tell you where tension is being held in the body, and when it is being released. If you use the correct level of light touch or pressure, and follow what the horse’s own body is telling you, you will help the horse release the tension on its own. When this tension is released you will see immediate improvement in mobility, comfort, attitude and performance.

About The Masterson Method® of Integrated Equine Performance Bodywork: The Masterson Method is an integrated, multi-modality method of equine massage. It is a unique, interactive method of equine massage in which you learn to recognize and use the responses of the horse to your touch to find and release accumulated tension in key junctions of the body that most affect performance. In contrast to most traditional modalities, it enables the horse to actively participate in the process of releasing tension. It is something you do with the horse, rather than to the horse. This participation and interaction is what makes the method fascinating for those who use it. In fact, if you do not allow the horse to participate, it does not work!

To find out more about The Masterson Method® techniques, books and seminars leading to certification go to:  www.MastersonMethod.com