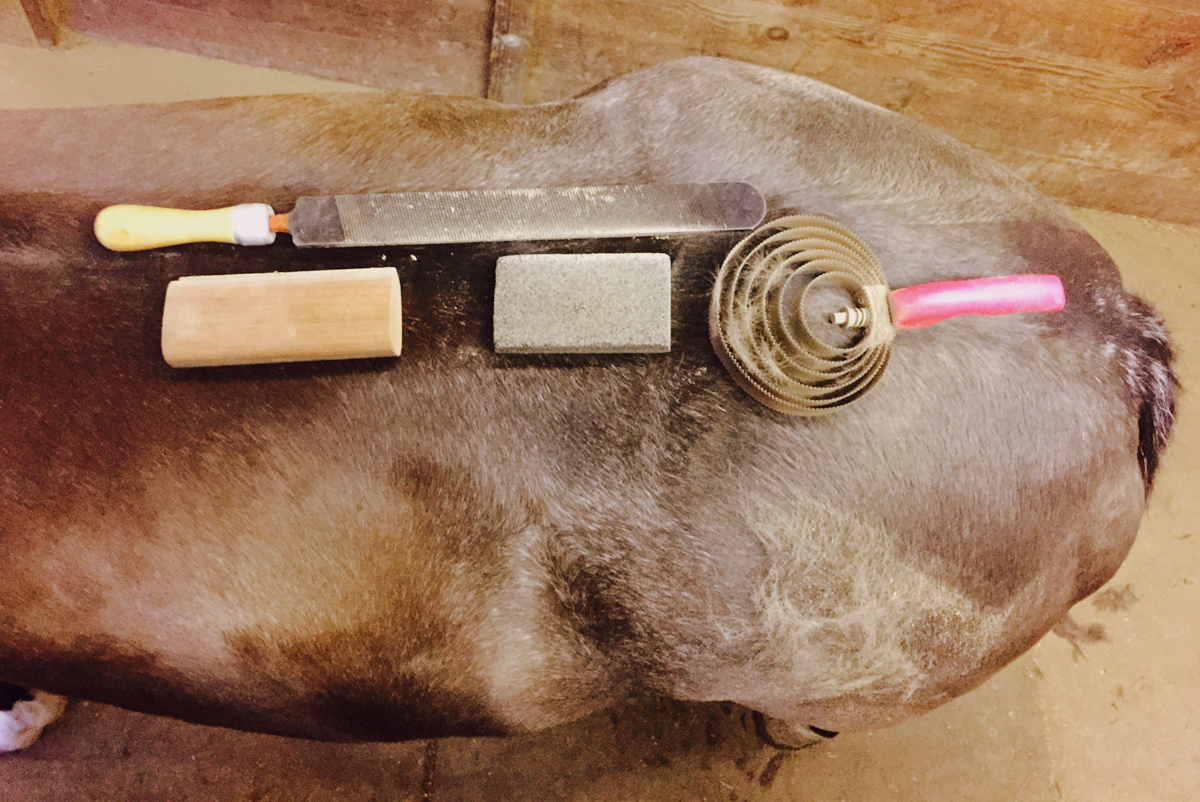 By now, the shedding season is winding down—hallelujah! Every year I feel a renewed sense of wonder at how much hair can come off my horse and for him to 1) not be bald and 2) still have more hair to shed. Throughout the spring months I kept seeing videos extolling the virtues of the Sleek EZ grooming tool. These videos made me wonder if this particular item had greater value than the other grooming tools sitting in my trunk. I also purchased a Slick ‘N Easy grooming block this year to compare to my trusty (and old) metal curry comb. Every time I went to the barn it seemed I was picking horse hair off my lips and, occasionally, from my tongue. Ugh.  I was more than ready to help the spring shed-out process move along.

I tried out the grooming block and was impressed with how much hair it removed (I hear they can also be used to remove bot fly eggs), but to be honest it wasn’t much more effective than the curry comb. For a bit less effort on my part, it produced the same outcome. Also, on the third day of using the grooming block I pressed the short end into my horse’s sides and broke it in half. I don’t believe I have superhuman horse grooming strength so I’m left to believe the grooming block can’t take much abuse.

I was unable to obtain the exact Sleek EZ tool I’d seen in the videos, but found a similar handmade shedding blade tool and put it to the test. The hair and dirt from my horse’s coat adhered to the blade on my first go with it which prohibited the blade from continuing to pull loose hairs out. This was disappointing. A fellow boarder suggested I try going perpendicular to the hair growth instead of with it. That improved matters some, but I still didn’t see the impressive results I had witnessed on video. I took the shedding blade to a different horse with a longer coat and this is where the tool began to shine. On the longer coated horse it really seemed to remove more hair, and without the vigorous circling motion required when using the curry comb. As an afterthought, one of my barn mates mentioned that she sometimes used the edge of her rasp to help her horses shed out. We took it to my patient gelding’s rump and hair, dirt and dander came out in clumps. To my surprise, I found the edge of the rasp to be the best at removing hair and grit from my boy’s coat. The drawbacks to the rasp are its size and heft, which means it can’t be used effectively on smaller or bonier areas. The rasp also required I use both hands to pull it across the hair. Even with these drawbacks, it was by far my favorite tool of the ones we tried.

As for my horse, he is not one that enjoys standing around to get groomed and fawned over. He seemed to enjoy the grooming block the most. I was not impressed with the shedding blade and wouldn’t spend the money on one for my own horse. It could be very helpful for longer coated horses, but I just didn’t find it worth the money. As for the rasp, even though it worked well its weight required the use of both hands making it an impractical tool.

In short, for ease of use and hair removal my top choice would be the grooming block. However, the fact that it snapped in half so quickly makes it seem like a waste of money as it doesn’t work well in pieces. For now I’ve decided to consider a 20 minute round of vigorous brushing as my cardio workout for the day. Until I find that magical shedding tool that removes hair easily, and in piles, I’ll be easy to recognize each spring. Look for the girl with the rusty curry comb, covered with horse hair.