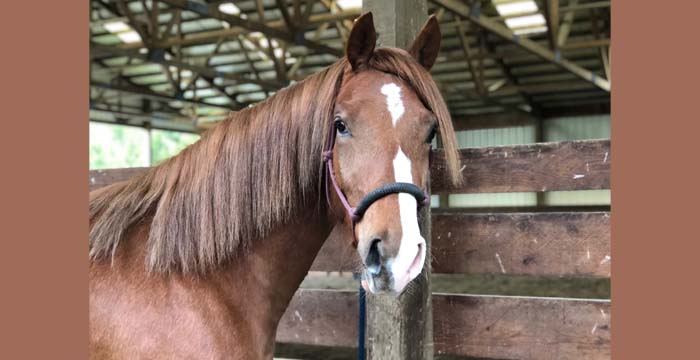 My young horse, Gus, turned three years old in May. The years have flown by since I brought him home as a pudgy weanling, and now it’s time to start him under saddle. He’s a typical adolescent—bumbling and silly in one moment, taking my breath away with his athleticism and beauty the next.

He’s a good boy, mostly, though he has the ability to be a bit naughty too. Bold and arrogant, he leads and bosses around his elder field mate (30-year-old Wulf) like a horse with more experience than a mere 3-year-old. Gus has an aggressive side too; he chases birds, rabbits, and coyotes out of his and Wulf’s field, as though wild creatures aren’t allowed to touch down in his territory. And he’s annoyingly mouthy…

Half Welsh Cob, half Thoroughbred, he’s grown taller than I’d hoped. He’s already taller than his Thoroughbred dam, Coco. I started Coco under saddle for her owner many years ago; she was easy, willing, and an exceptionally hard worker. Coco was a special horse that stood out among the hundreds of horses I’ve started in my career—a plain little red mare who had both a balanced body and brain.

I met Gus’s sire, North Forks Cardi, at a horse show when he was only three. Impressed by the charismatic little Cob stallion, I watched him throughout his career as he worked his way through the dressage levels, winning championship after championship all the way to Grand Prix and a National Championship at that level.

Now I have the progeny of these two special horses, and I’m grateful. Working with him, I’m reminded why it’s worth it to own performance horses from proven stock. This horse game is hard enough; why not start with something bred to do the job you want? Even if that job is just to be a fun, good-natured horse.

My hope for Gus is that he’ll be a good, all-around capable horse. Something to ride in the mountains one weekend and a Working Equitation show the next. I’ll bring him along slowly and carefully in his training and fingers crossed, he’ll be the horse I’m hoping he’ll be.

Enjoy our Performance Horse issue! We have a delightful article about a one-of-a-kind event horse named French Twist. Also, I’m pleased to have trainer/writer Anna Blake as our Trainer’s Corner columnist for four months. Anna brings a unique, low-stress style to her training and writes beautifully about the process. kim@nwhorsesource.com