Hay! Are You Getting What You Pay For?

Hay! Are You Getting What You Pay For? 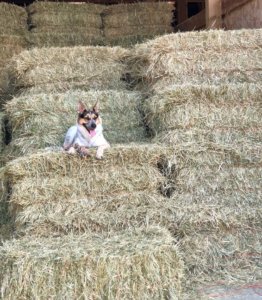 In most instances I would defend the idiom you get what you pay for. As U.S. hay prices have escalated significantly, it would be great if that were true. However, when it comes to buying hay, it’s not that simple.

Just because hay is expensive, looks or feels good, or is a heavy bale doesn’t mean it’s high quality. Although hay is typically sold by weight, much of that weight could be due to a high percentage of ash in the hay.

Ash is the total mineral content divided into two types: internal ash (from the plant) and external ash (dirt and dust from harvesting and storage). So, you could literally be paying more for a bale that simply has more dirt than another one. A ranch manager in Central California recently paid $345 a ton for the “high quality” alfalfa she requires for a band of equine senior citizens, up from $190 a ton 10 years ago. Fuel prices involved in that hike make it an extreme example, but, at any price, you don’t want much of it being external ash.

Weight is not a good way to determine if hay is high quality. It’s important to know what factors affect quality and nutritional value. The main factors affecting hay quality include: the type of hay, soil, weed contamination, rain (moisture), and how the hay is cut, dried, and baled.

As the buyer for our horses, we cannot control any of these factors. Even if we have a great relationship with our hay supplier, they can only control so much themselves depending upon the weather and the type of equipment they use to bale the hay.

The only definitive way to know the quality of your hay is to have it tested. There are feed companies that will test your hay at a very reasonable cost. Additionally, some of the best hay providers will have the hay tested before they sell it to you. The more often you test your hay, the more surprised you will be by the differences in the nutritional profiles.

In a perfect world, your hay has been tested and shows an excellent nutritional profile with a low ash percentage and has a high leaf-to-stem ratio. If this is the profile of your hay, then why would the hay need to be steamed? There are two simple reasons: mold spores and external ash.

Mold spore count can also be tested by a laboratory. It’s measured in “colony forming units per gram” (cfu/g). If hay has over 1 million cfu/g, it’s at high risk of causing respiratory problems with your horse. Even when hay has a high nutritional profile, it can still have a high mold spore count.

Unfortunately, as the grass itself grows, there are a number of bacteria and fungi that will grow on the plant naturally. As the hay is cut and dried, certain types of bacteria and fungi die off, but others may thrive––even in a lower moisture environment. That’s why the drying stage of making hay is so very important. However, even if processing the hay goes exactly to plan, a certain number of mold spores remain and will inevitably invade your horse’s airway.

Second is the issue of external ash. Even with a low percent, there will still be an amount of dust and particulate matter that will remain on the hay and become airborne once the horse pulls on the hay to break it apart to eat.

Therefore, regardless of the quality of the hay, it will have mold spores, dust, and particulate matter that can insult the horse’s airway. The best way to combat those problems is to steam the hay from the inside-out using a high-temperature hay steamer. This is scientifically proven to kill mold spores and reduce the dust and particulate matter.

The Wildest Rides of 2018
Who Are You and What Do You Want for Your Horse?