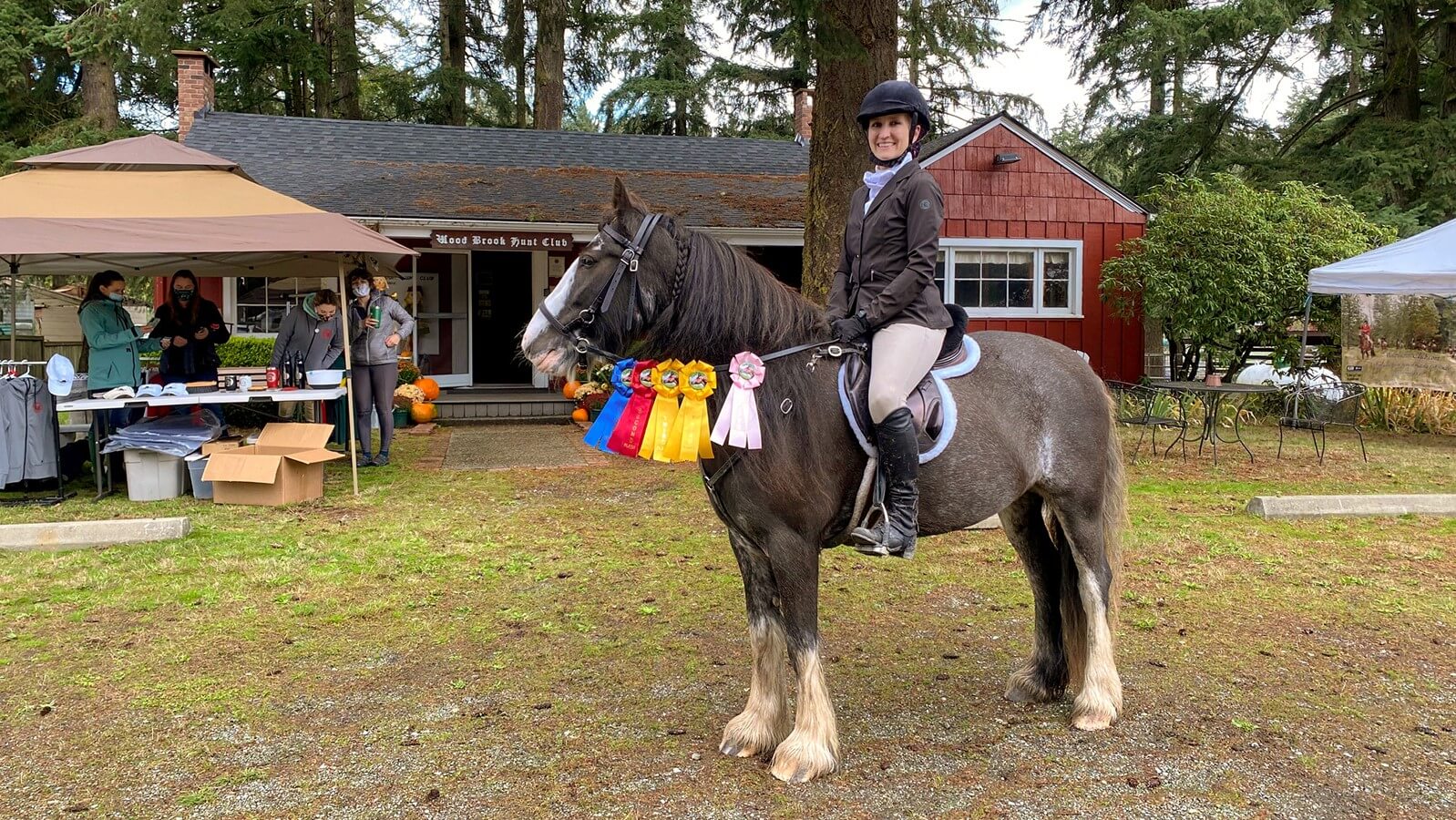 “I never planned on going bitless. In fact, the idea scared me initially,” shares Kristina Lotz.

In 2007 she was bucked off a horse she was trying out and the fall broke her pelvis in three places. In addition to the physical trauma, the mental trauma for this equestrian was nearly unbearable. It was six grueling months before Kristina would walk again unaided, eight years before she would ride again, and 11 years before she met Merida—the horse who would change everything.

In July of 2018, Kristina found herself perusing Gypsy Vanners for sale on DreamHorse. She had been riding an older Fjord, her gateway horse to overcoming her fears. “I was just planning on walking and trotting,” she says. “I still wasn’t cantering much. The fear I had was very real to me and it was hard to convince my body otherwise.”

That was, until she met the 7-year-old Gypsy mare named Merida.

“Her name caught my eye because it’s the name of the Disney Princess in ‘Brave,’” Kristina explains. “Since I do mounted archery, it felt like fate; it just felt right.”

Understandably, she was nervous about taking an unknown horse out for a test trail ride. And though Kristina may have been apprehensive, Merida didn’t falter once. “She has that kind of disposition, where, even if my nerves get the better of me, she doesn’t get worked up,” Kristina shares. “She was exactly what I needed.”

Merida has a quirky personality and especially likes to play with her tongue. “It’s a great way to tell her mood,” Kristina says. “I have learned that if her tongue is hanging out, she is bored and it’s time to move onto something else.”

But it also meant that she didn’t seem very happy in a bit. She would pull the reins and toss her head constantly, fussing with the bit. Multiple types of bits were tried.

“My trainer and a friend both suggested going bitless,” Kristina says. “That scared me. After my accident, ‘control’ had become a failsafe and for some reason I equated bits with control. I grew up riding horses in hackamores; it made no sense for me to feel that way now, but traumatic fear and stress are like that. They don’t have to make sense for them to be real.”

Kristina’s desire to do the best for her horse required her to emulate the Merida of fiction and be brave. Ultimately, she put Merida (the horse) in a sidepull. “What a difference it made!” she recalls.

“All of her anxious tells disappeared, and she can play with her tongue whenever she wishes (which she does much to the amusement of all),” Kristina adds with a chuckle.

Riding bitless can pose a problem if you want to show, however. “Many disciplines won’t accept it because the big organizations, like USEF, have it in their rulebooks to not allow it,” Kristina explains.

“I am not anti-bit, but there is no good reason to not allow people to compete bitless. Horses buck, bolt, rear, and spook even when wearing a bit. You have no more control with a bit than you do in a bitless bridle,” she says.

She qualifies that by saying that there should be rules about the type of bitless equipment that is allowed, as some of it can be quite harsh, and adds that shows would become more inclusive, gaining entries from horses averse to bits because of medical reasons or otherwise.

“We talk about horse welfare and realize we need to do more for our equine partners who we ask so much of,” Kristina says. “Well, this would be a big step in the right direction.”

The Gypsy breed registries allow horses to show bitless, as do some of the local open shows. “Flying M Ranch and Donida Farms both welcomed me to come and show,” Kristina says. “They were so nice! I won my first ever high point — with any horse — at Flying M. And two high points at a recent Donida Show for trail and English.”

Kristina was also welcomed at the Woodbrook Hunt Club for their schooling show. “I had never really jumped before, but Merida and I had one crossrail lesson and a couple practice rounds,” she says, “and we ended up placing in every class and won the Handy Foxhunter class for non-members!”

Kristina rides English, Western pleasure, (sometimes in a sidepull, sometimes in a bosal), and does mounted archery and mountain trail. Last year she and Merida were World High Point Champions in the pony division for the International Mountain Trail Challenge Association (IMTCA). They also earned Exhibition Champion Mare (twice) and the 2020 Mare Halter and Performance Champion for the Gypsy Horse Registry of America (GHRA). In 2019, they earned Horse and Human of the Year for the International Registry of Bitless Equestrians (IROBE).

Merida is now learning to drive bitless and Kristina is still learning how to be brave. It’s an ongoing process for her, just like her devotion to her horse. And neither of them is giving up.

See this article in the July 2021 online edition: