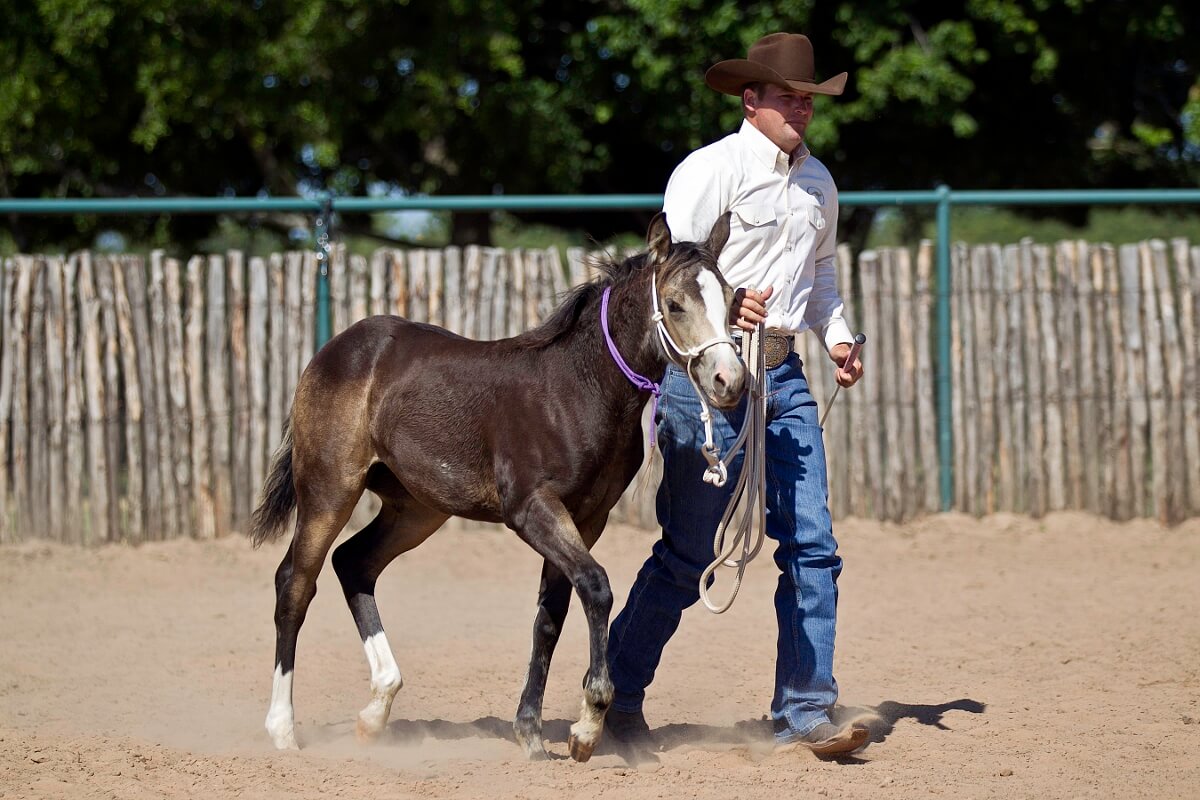 Follow these tips from Clinton Anderson to get your partnership with your foal off to the best start. 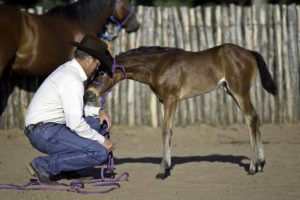 The earlier you start working with your foal, the quicker he’ll learn the right behavior and never get the chance to develop bad habits. Don’t leave him turned out in a field and wait until he’s 1,000 pounds to realize he’s pushy, disrespectful, spooky and downright dangerous. The golden rule when you’re working with horses, but especially young ones, is to be consistent. Consistency is your greatest alley. Inconsistency is your greatest enemy. Spend 15 to 20 minutes a day, or even twice a day, working with your foal, moving his feet and desensitizing him. The more consistent you are, the faster he’ll learn the right behaviors.

Don’t let your foal get into the habit of thinking he can avoid you whenever he wants. When you first go to work with him, be sure you’re in a small, enclosed space, such as a stall or roundpen, so that he can’t run away from you. I always have someone help me catch the foal for the first couple of weeks so that he never develops a habit of running away. If you let the foal run away from you, darting around his mother, ducking under her belly, etc., he’ll soon turn catching him into a game of “You can’t touch me!” And once he learns that game, undoing his bad habits will take a lot of work. Set yourself up for success by starting to work with your foal as soon as you can, working in a small, enclosed area initially, and having someone help you in the beginning.

Don’t let the foal get pushy. 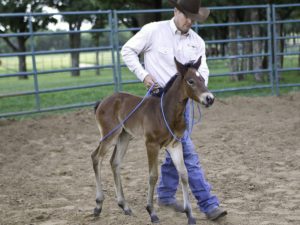 Once a horse is no longer scared of human beings, he’ll see if he can dominate you. That’s when the foal will try to bite you, kick you and see if he can push you around. Remember, horses live by the rule – whoever moves first loses. That’s how they establish their pecking order. The lead horse in a herd is the horse that can make everyone else’s feet move. Once the foal is over his fear of you, he’ll quickly see if he can dominate you and make you move your feet. You have to prove to him that not only can he not make you move your feet, but you will make him move his. How do you earn a horse’s respect? By moving his feet forwards, backwards, left and right and always rewarding the slightest try.

Letting foals get pushy and dominant is the biggest mistake I see people make with young horses. Someone will raise a foal in their backyard and treat him like a big dog. That’s all well and good when the foal is little. When he rears up, nibbles your clothes, kicks out or squeals and runs away, it’s all kind of cute. That behavior soon turns dangerous when he’s 500 pounds and eventually 1,000 pounds.

If you gain the foal’s respect when he’s young, he’ll never have a chance to develop those bad behaviors. He’ll never learn that it’s OK to bite, kick or run away from you. I like that people get their foals quiet, I just don’t like when they try to turn them into lap dogs with no respect for human beings. Because in that situation, it’s not if you’re going to get hurt, it’s just a matter of when and how bad. Just like adult horses, foals will quickly learn to dominate you if you let them. Be a leader that your foal respects by moving his feet forwards, backwards, left and right and always rewarding the slightest try. 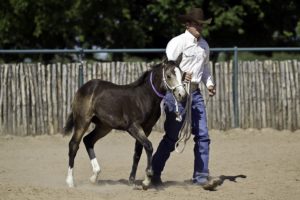 The more you can just hang out with your foal in the beginning, the better connection you’ll have with him. Go in the stall with him and the mare and read a book, talk on your cell phone, groom the mare, clean the stall, etc. The more you ignore the foal, the more curious he’ll become. However, if every time you go into the stall, you approach the foal like a predator and quickly try to get your hands on him, he’ll soon start to get defensive and run away. When you go into the stall, act casual, have passive body language and pretend that you couldn’t care less about the foal. If you do that, it won’t be long before he’ll be coming up to you, sniffing you and wanting your attention. Use a little reverse psychology to increase his draw to you.

It’s important that when you’re working with foals you don’t underwork them or overwork them. Be careful of falling to one extreme or the other. I recommend working with foals 15 to 20 minutes a day and giving them short, frequent breaks throughout the session. You’re not going to be working the foal as hard as you would work an adult horse because he doesn’t have the same stamina as a grown horse. With foals, you have to be conscious that you don’t run them out of air. When you first start working with the foal, three or four laps around the stall will tire him out. That’s why I recommend giving the foal frequent breaks to catch his air. The more you work with him, he’ll gradually build his stamina up so that your training sessions can last longer. Once a horse gets out of air, however, he stops thinking and quits looking for the right answer. Instead, he’s focusing on survival and finding air. 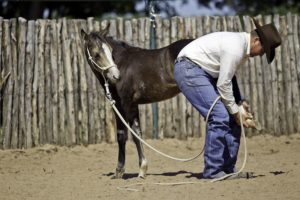 At the same time, I don’t want you to think foals are so delicate and fragile that you can’t make them move their feet or correct them when they misbehave. They’re a lot stronger than what people give them credit for, and if you don’t move their feet and correct disrespectful behavior, they’ll quickly turn into problem horses. Your foal can handle Wanexercise; he just can’t do it to the level of a grown horse.

Working with your foal isn’t going to harm him as long as you don’t go to either extreme. You have to stay in the middle – not excessively working him and not treating him like he’s made of porcelain, either. Moderation is key.

The Foal Training Series follows the progress of two foals as they go through their first exposures to haltering, leading, handling feet, tying and more. Clinton works with a foal he imprints at birth and another foal he purposely leaves untouched for a month to demonstrate how to approach both training situations and still come to the same result – a respectful and willing partner.