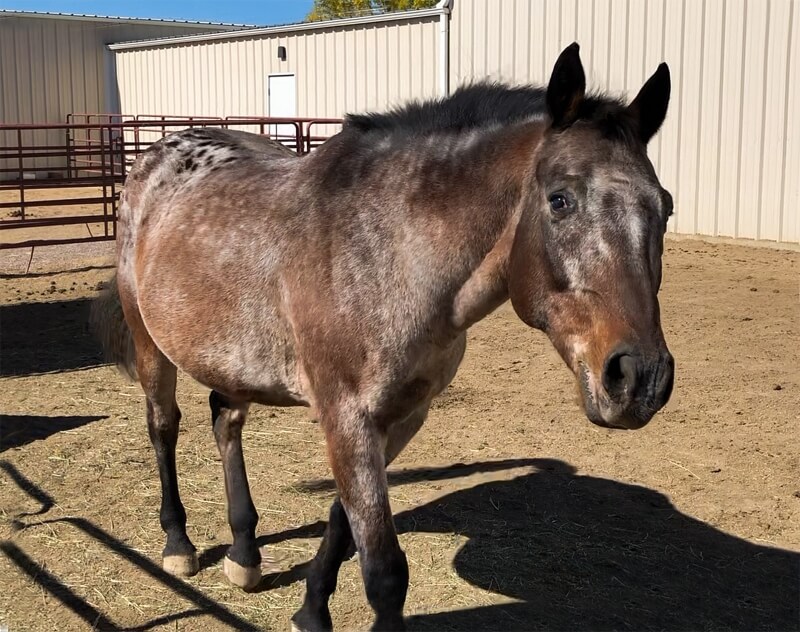 The gelding stood with his head cocked to one side, nose extended forward. Curious and charming, our heartstrings tightened when we learned he was mostly blind. We’ve all seen inspirational stories of sightless horses living happy lives. With the right companion, and enough human love, he had a chance…didn’t he?

The truth about Bailey was that he suffered greatly and worsened every day. This Appaloosa had bilateral equine recurrent uveitis (ERU), causing progressive blindness. As the light literally faded for him, he became increasingly anxious, distraught, and lost in a darkened world. Physically healthy but emotionally unstable, Bailey was euthanized not only for safety, but to end his distress.

The UK committee Advancing Equine Scientific Excellence reports that less than 9% of horses die naturally, which means for the remaining 91% a decision to euthanize is required. This murky area is rife with subjectivity and strong, often desperate, human emotions. Euthanasia is a necessary topic, both as responsible owners and for the best interest of the horse.

Bailey’s treating veterinarian, Bruce Connally, DVM, MS, explained his head tilt, saying, “The ‘cute’ tilt of his head isn’t cute. That’s not normal. He’s trying to see. That tells you something is bad. You have to understand why he’s responding the way he is.”

With over 30 years of clinical experience and co-authoring a book on euthanasia techniques, Connally identified Bailey’s doomed plight early on. He noted that many blind horses adapt well with a companion, but there are exceptions. “He was constantly afraid, and when a horse is afraid, they bolt,” he said. “They try to run, and someone’s going to get run over. Trying to find a home for a horse in this condition, even with a companion, to me that is the most unfair thing to do. I just can’t imagine taking a horse that’s already afraid, not knowing his environment, and moving him to a place he’s never been. It doesn’t seem like success to me.”

Rachel Corbman, Operations Manager for Colorado Horse Rescue (CHR), has witnessed thousands of euthanasia procedures over her 14 years there. In the case of Bailey, it was a profound quality-of-life issue.

“Some horses can get along just fine without vision,” she said. “Bailey did not fall into that category. The behaviors were so significant; it was a pain response that you can’t address.”

Even more common than misinterpretation of cues is missing them altogether. Because horses are prey animals, they’re genetically predisposed to stoically hiding signs of injury or illness.

“A horse with a broken leg will stand perfectly still,” Dr. Connally offered. “It’s really hard to read that.”

A 2021 UK study examining equine end-of-life decisions revealed poor recognition of pain as one cause of prolonged suffering. Alexandra Bianco, DVM, MS, DACVIM, is a University of Minnesota Veterinary professor, as well as a published researcher specializing in pain management. Her studies have shown owners are not very good at recognizing pain in their horses.

“Owners can recognize gait abnormalities, but don’t necessarily recognize lameness as pain,” Bianco said. “There’s a kind of a disconnect—pain is why a horse is lame. To me, those are inextricably linked, but to an owner it’s not the same thing because the horse can manage. If it’s not affecting the owner’s ability to use that horse, then they don’t see it as a source of pain.”

Facial features, such as flaring of nostrils and wide-open eyes, can indicate pain. Other cues might include rembling, grunting, and general agitation, as can subtle signs such as a change in respiration.

“When you hurt, you breathe hard,” Connally explained.

Dr. Lauri Stanley, a private practice veterinarian in Colorado, agrees with Connally regarding a horse’s instinct to mask pain, advising we often need to look to more subtle clues for systemic problems.

“Notice when horses stop doing things they really like to do,” she warned. “The owner notices things day-to-day that the vet might not notice. I’ve learned I really need to listen to owners when something just doesn’t seem right.”

This could be not going out to pasture every day, dropping food because they can no longer masticate, or not being able to lie down due to joint pain.

“They do lose weight with chronic pain, even when you’re feeding a lot of calories,” she advised. “Being in pain burns energy.”

When this happens, Stanley strongly encourages factoring this level of pain into end-of-life decisions. Noticing larger changes over time is also important.

“There’s something to be said for taking the advice of your vet or the advice of any equine professional that doesn’t see your horse every day,” Corbman said. “It’s easy to overlook lameness or slowly deteriorating health. Slow changes are harder to notice.”

“No one has come up with a chronic pain scale,” Bianco shared. “It’s hard to identify chronic pain in horses objectively. An evaluation by a veterinarian is the only way to catch those things before they’re big problems. I want to see a horse before it’s losing weight, before it’s not eating, before it’s crippled. I don’t think a horse needs to be completely suffering before deciding to euthanize it. But you must have a close relationship with your vet to have that conversation.”

There are some established global guidelines to help answer, “Is it time?”

Corbman refers back to Bailey’s story, and the importance of seeing the whole picture.

“His Five Freedoms were so compromised,” she noted, referring to the internationally recognized guidelines stipulating conditions for animal welfare. “Falling back on the Five Freedoms is valuable because it allows us to evaluate the horse while pulling emotion out of the equation.”

Sharon Gilbert, Adoption Manager at Colorado Horse Rescue, has seen the Five Freedoms tested every day during her eight years with the organization.

“Ask yourself: Does this horse live in pain every day?” she began. “Is that managed by pain medications? And if the condition is untreatable, how much pain does that cause? How much freedom does he have to live just like a horse? As herd-based animals, is he alone in confinement? If not confined, can he compete for food and water? Can he get out of the way if there’s a dispute? The Five Freedoms help guide us in assessing the horse’s life from his perspective.”

It’s hard to think about end-of-life choices, but preparation goes a long way in making feeling at peace with your decision.

Plan Ahead With Your Vet. Discuss end-of-life parameters before it’s necessary. Have conversations with your veterinarian so that you have criteria, and make a list identifying the things to look for.

Remove Emotion. The goal is a natural life without painful deterioration. “We’re responsible for these creatures,” Gilbert said. “They deserve for us to try to see it through their eyes, not just with human emotions but with what a horse needs to be a horse.”

Consider Quality of Life. Delay can be a devastating choice. “There are things worse than death,” Bianco noted. “Suffering is worse than death for these horses. What is the point of living a longer life if it is a longer

See this article in the July/August 2022 online edition: