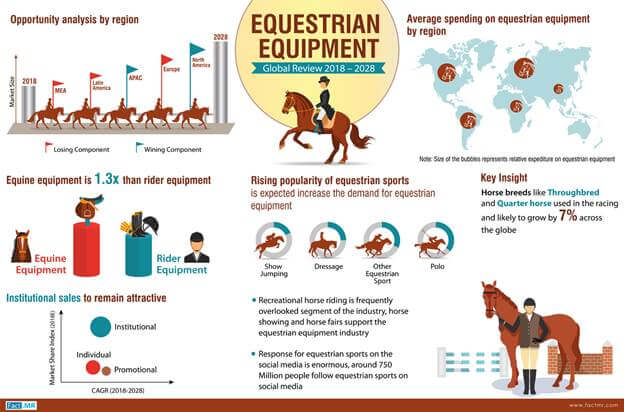 The US$ 1.9 billion equestrian equipment market in 2018 is expected to ride on an optimistic growth trajectory in the coming decade, as per the new Fact.MR valuation. The study foresees 1.4x growth during the period of 2018 – 2028. While the market remains highly fragmented, delivery of high functionality and fashion in equestrian equipment remains the prime focus of prominent market players. Taking the advantage of an unorganized market, tier 2 players with the easy accessibility of raw materials are introducing new products and economic alternatives. With over 85% of the total market share in 2018, tier 3 players continue to strengthen their presence in the domestic equestrian equipment market.

Fact.MR study shows that the promotional buyer type segment is expected to witness rapid expansion at a 4.3% CAGR through 2028. Rising prestige and visibility of international horse competitions such as Olympics and World Equestrian Games can be attributed to the increasing demand for equestrian equipment by promotional buyers. Institutional buyers are expected to maintain their preeminence with almost 60% market share owing to a significant rise in the number of private horse clubs.

Direct-to-consumer channel is estimated to capture nearly 44% of the global market share through 2028. This growth can be attributed to equestrian equipment manufacturers’ preference for contractual business with international competition organizers. Increasing inclination for online purchase explains the fastest growing third-party online channel at a CAGR of 4.7% during the forecast period.

With the significant impact on the U.S. economy, the equine industry in the United States thrives with the presence of 7.2 million horses of which over 70% engaged in recreation, showing, racing and working activities. The study shows that North America will continue to hold the largest market share with the U.S capturing over 90% of the regional growth. Europe is estimated to occupy the second largest position backed by a significant impact of social media, growing emphasis on equestrian recreational activities and a deep-rooted sports culture. Emerging interest in equestrian sports in Asia Pacific is identified as the prime factor for APAC’s 1.5x growth projection during the forecast period. Greater China is expected to capture nearly half of the APAC market share with the significant growth of China’s equestrian industry.

Demand for equine equipment is expected to outsell that of rider equipment owing to rising number of equestrian clubs and riding schools. Among equine equipment, saddles are estimated to capture over 30% of sales as they remain the most common and highly utilized equine equipment.

The insights presented here are from a research study on Equestrian Equipment Market by Fact.MR