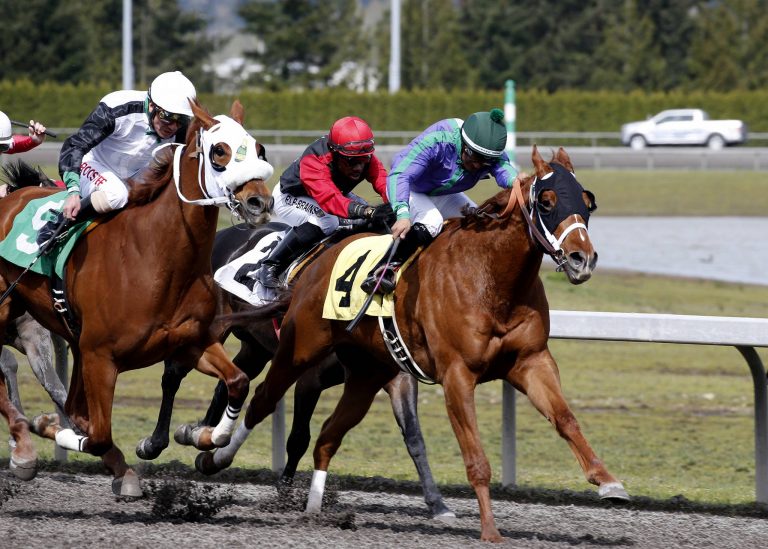 AUBURN, Wash. (April 16, 2017) – Keller’s Gold held off Moneydontspenitself and scored a giant upset Sunday in the $20,500 allowance feature for 3-year-olds at Emerald Downs.

So Lucky, track and state champion 2-year-old of 2016 weakened slightly in the stretch and finished third in his season debut.

A Washington-bred gelding by Liberty Gold-Glory Hallelujah, Keller’s Gold was stakes placed last year at Emerald Downs and one of the top juveniles last fall at Portland Meadows. His career record is 5-4-0 in nine starts with earnings of $57,124, including $11,275 for Sunday’s victory.

Moneydontspenitself overcame a poor beginning to nearly get the victory. Victorious in his only start as a 2-year-old, Moneydontspenitself moved up to challenge Keller’s Gold through the stretch but was out finished in the final yards and settled for second. Ridden by Javier Matias, the runner-up paid $6.60 and $5.40.

So Lucky, ridden by Rocco Bowen, broke like a rocket from the No. 2 post, led through a quarter-mile in :21.94, and was challenged by Keller’s Gold and Moneydontspenitself as the three leaders raced through a half-mile in :45.91.

From there it was a battle between Keller’s Gold and Moneydontspenitself, as they raced head and head to the wire, Keller’s Gold prevailing by a half-length while So Lucky gave way gradually inside.

In the $18,500 allowance/optional claiming co-feature for 3-year-olds and up, Grand Palais gamely held off a wall of challengers for a nose victory in 1:03.30 for 5 ½ furlongs.

Togrammashousewego flew late to finish second and Canadian shipper Silvertown was a head back in third. In a rarity, the top three finishers are all grays.