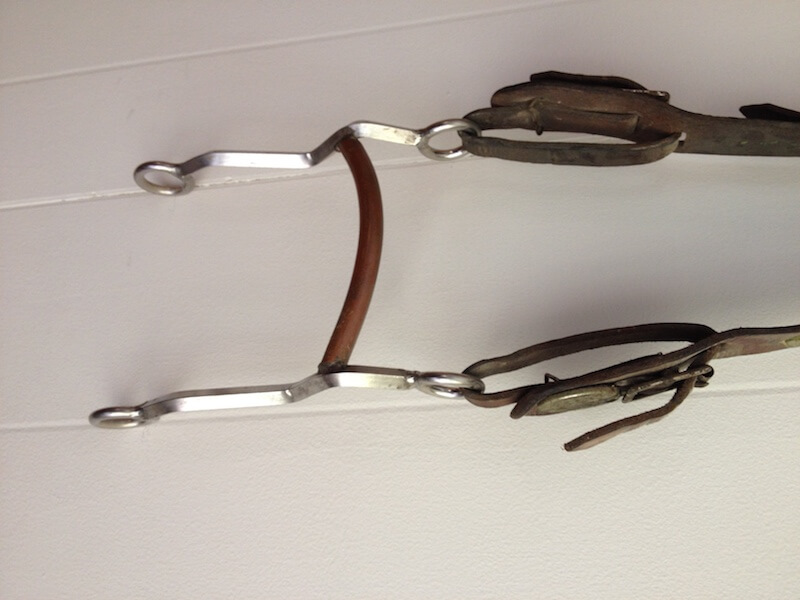 On Horses, Tack, and the Almighty Opinion

The above photo is the curb bit I used on my childhood horse, a spunky Arabian named Sunfire. As I recall, I rode Sunny two-handed much of the time in this humdinger of a leverage bit. I did not understand things like the axis and atlas joints in a horse’s head/neck (see our feature on bits and bridles) or why it might be important to teach Sunny how to carry himself comfortably on his hind end before using a bit with five inches of shank. Blissfully ignorant, I simply put the bit in his mouth and like thousands of other horses with similar owners, Sunny adjusted and we did alright. For the most part.

Of the many topics dear to the equestrian, the “right” equipment ranks right up there with other subjects guaranteed to become heated during conversation—politics, for instance. I’m no different than other riders in this regard: I know what I like and have a short list of things I would never, under any circumstance, use with any horse (draw reins…). Having said that, it is a curious thing that for every tool I would never use on a horse, there is somebody, somewhere, using that exact tool and doing alright. For the most part. This is largely due to the fact that we love an animal that is perhaps the most forgiving and adaptable creature on earth. It is also because the most critical component of horse headgear is not the tool itself, but the hands holding the reins that are attached to that bridle. A spade bit—in appearance surely one of the cruelest bits— in the hands of an educated horseman is used with the lightest suggestion and I have seen a few horses’ mouths bloodied by a simple snaffle bit. There remains no substitute for knowledge.

This month our cover story features the Great Alaska Horse Expo—don’t miss the fun up north—and we have more than one article focused on tack and equipment. Read, learn, and form your own opinions. And always, keep an open mind. The horses deserve it.