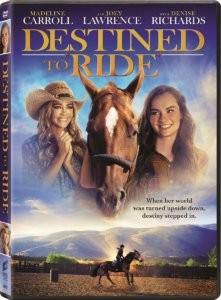 CULVER CITY, Calif. (July 2, 2018) – Madeline Carroll (I Can Only Imagine) stars as a teenager who thinks her social life is over when she is sent to her aunt’s ranch for the summer but to her surprise develops an unbreakable bond with a horse named Pistachio in the family-friendly drama DESTINED TO RIDE, debuting on digital and DVD August 14 by Sony Pictures Home Entertainment. She tames the spirited horse and finds herself in a competitive race to win her aunt’s land and avoid losing her now treasured new companion. DESTINED TO RIDE also stars Joey Lawrence (“Melissa & Joey”), Denise Richards (Starship Troopers), Cassi Thomson (Left Behind), Amber Frank (“The Haunted Hathaways”) and Manolo Gonzalez Vergara (Hot Pursuit).

Lily’s life is turned upside down when she is forced to leave her friends to spend the summer on a remote ranch with her nature-loving aunt. Convinced her social life is over, she is surprised to meet an unlikely group of friends and embarks on an adventure of a lifetime. When her aunt is threatened by unfriendly neighbors, Lily knows it is up to her and Pistachio, the horse she has discovered and developed an  unbreakable bond with, to save the ranch and to find her destiny along the way. Starring I Can Only Imagine’s Madeline Carroll, Denise Richards and Joey Lawrence.

DESTINED TO RIDE has a run time of approximately 90 minutes and is rated G.