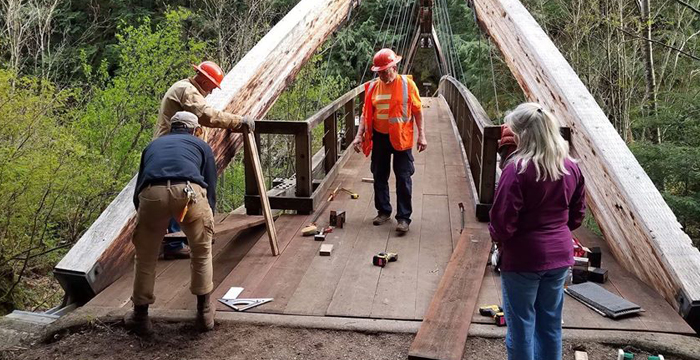 collaboration (noun) 1. The action of working with someone to produce or create something.

Back Country Horsemen of Washington (BCHW) is “hooves down” invested in collaboration. Collaboration is often the best and most efficient way for BCHW to fulfill our mission to keep trails open and accessible to stock use.

We certainly have a unique tool to bring to any trail maintenance effort: that pack animal hauling gear deep into the wilderness and carrying provisions to support a Washington Trails Association, or Pacific Crest Trails Association work crew. When we aren’t completing our own projects, we might be scouting for the Pacific Northwest Trail Association, or maybe we’re dropping lumber or materials for Forest Service or Department of Natural Resources projects. Whatever we do, we do it with other trail user groups in mind, often with their help and support.

However, BCHW’s collaboration goes far beyond the on-the-ground work projects. There is a constant need for equestrians to be involved in planning efforts for our public lands. Recreational and public lands advisory groups are necessary so the knowledge and vision of users of these lands will help guide the direction for the managing agencies that caring for them.

Many advisory groups have formed in the state and include every aspect of our communities. Hikers, bikers, ATV’s trail running, outfitters and guides, mountaineers, snowmobile associations, conservation groups, hunters, fishermen and local residents are included to help direct planning, manage projects and protect these resources.

The work within these committees can also extend to education, the recognition of economic importance to local business, and to fundraising efforts. While the agencies have the final decision for plans it is critical that they have our input to guide their process and policy decisions.

Collaborative planning and advisory groups are becoming more important and are forming faster as more people adopt a “just get outside” attitude and as people and organizations recognize the need to look at how we are using our public lands. Recreation has also become more diverse. Often, the commitment to such a group is a long-term effort.

The Teanaway Community Forest (TCF) Advisory Committee is a prime example of an ongoing planning effort that has included recreational organizations, public lands agency managers, and local residents to formulate a strategy for the unique opportunity that was presented in 2013 when Washington State purchased 50,241 acres in the Teanaway River drainage and laid out broad initial guidelines for its future. Back Country Horsemen has had an equestrian representative on the TCF advisory group since its inception in March 2014. www.dnr.wa.gov/publications/em_tcf_managementplan.pdf

Another important effort that BCHW participates in is the Methow Valley Trails Collaborative (MVTC), a non-profit organization that was formed in 2016. The Methow area has become a mecca for outdoor enthusiasts and has been named as one of the 15 national USDA Forest Service priority areas. See www.trailscollaborative.com/partners-impact.

BCHW has members that are advising and guiding planning efforts on the Olympic Peninsula, and some members that are working with Washington State Fish and Wildlife to look at process and planning for the Quincy Lakes Unit.

We are fortunate here in Washington to have a vast amount of public land that is available to us. BCHW is privileged in that our organization is often requested to represent the broader equestrian community. To help us continue to have a voice in the matters that affect equestrians on public lands, please consider becoming a member of Back Country Horsemen of Washington. The number of members who ride, pack or those who support equestrian use matters when we are dealing with other user groups, land managers and public officials. Visit www.bchw.org for more information.

Back Country Horsemen of Washington is dedicated to keeping trails open for all users, educating stock users in Leave-No-Trace practices, and providing volunteer service to resource agencies. Learn more at www.bchw.org

Published in the May 2020 Issue