Verbal cues are common in horse training and usually stem from the rider’s desire to guide the horse with the softest of commands. In performance horse training, highly athletic maneuvers should be performed with precision and grace. This is not something that can be achieved by pulling and spurring the horse around the pen.

The only way to have a truly soft performance horse is to teach them to hunt the mildest of cues. This is achieved with the same concept of pressure and release that is introduced to colts from the earliest training: begin by cueing softly, escalate if necessary to get a response and release the pressure. I “cluck” a lot to my horses. Some people use both cluck and kiss cues, but I simplify it more than that. I have had too many incidents of dry mouth in the show pen so I use the cluck almost exclusively.  A cluck (or kiss) is me asking my horse (softly) to step it up a notch in speed or intensity. Any time you kick a horse, he will tense. I often ask people to think about how easy it would be to shoot a lay-up or 3-point jump shot while someone poked them in the side with a fork. He can feel a kick coming and will tighten his muscles. No horse can achieve his best if he is tensing. That said, you cannot achieve softness without being firm, if need be.

This is my philosophy behind the cluck: it gives my horse the opportunity to ratchet up, without being kicked. However, once opportunity is given and ignored, I follow up with another cluck(s) and an accompanying kick(s) until the horse increases intensity. Each time, I give the horse the option of responding to one simple cluck. It doesn’t take long to achieve response to this first, soft cue if you are careful to preserve the cluck. This means that you are careful to never give a meaningless cue and always enforce when it is ignored. Here are some examples of the ways I use this series of cues in particular maneuvers:

Spins: I feel people use too much spur here. How freely would you whirl around with someone needling your ribs? I use the cluck to ask my horse for speed in the spin. I always make sure that my horse has started at least a quarter of a spin using my rein cues, before I ask for speed. I will cluck and then if there is no response, I will give a cluck and kick, often offering direction with my inside rein, to prevent my horse from counter-bending. One common mistake I see is continuous clucking. Be meaningful and specific.

Back up: In the back up, I start my horse with my reins, lightly, and cluck for added speed. I enforce this by using my legs the second time if there is not an increase in speed.  Many horses, especially big stopping horses, won’t always run backwards. Pulling too hard on the reins will bind the horse up, pulling them too far over their hocks to accelerate backward. The cluck allows the horse to pick up the hind legs and back freely. 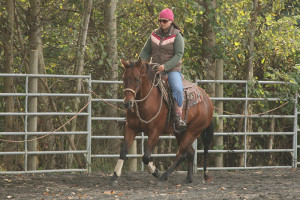 Running circles and lead changes:  This is probably the most simple. I cluck, if they don’t speed up, I cluck and kick. I like my horses to run freely. I don’t like to drive with my body constantly, but rather follow the motion of my horse as he responds to a series of cues. Driving with primarily the rider’s body leaves the rider as tired as the horse. In the lead change I cluck when I ask them to push their hip over because I am also asking them to drive that hind leg forward at the same time. I am asking for a notch more impulsion.

Run Downs and stops: For a horse to execute a flawless sliding stop, he must be at peak reach, stride and impulsion in the stride before the slide. It is unlikely that a horse will elevate, reach and drive while being kicked. This is one of the many reasons reiners and cow horse folks “fence” their horses as much or more than they stop them.  I will ask for acceleration with a cluck about halfway down my run. If I do not get it I will cluck and kick or spank my horse. If I cluck and get the desired speed, I leave them alone. I only stop my horse if he is running freely without kicking.

My stallion Cow Cuttin Colonel taught me a lot about this. He will actually grunt and tense dramatically if I kick him, seeking out the places where he can blaze with just a cluck. It was hard to miss that message! I try to remember that I am not training on my horse’s sides, or on his mouth, but between his ears. The most athletic maneuvers come from the willingness and understanding of the horse.  It takes discipline to use the cluck, but if you are mindful in its application, the result will be a freer and happier horse.