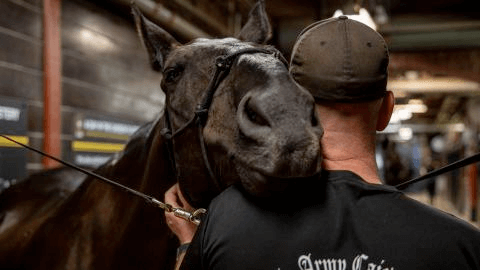 (Washington, D.C., June 13, 2022): Several weeks ago, the American Horse Council was made aware of some concerns regarding the conditions of the facilities housing the soldiers and horses of The Old Guard at Arlington Cemetery. The 3d U.S. Infantry, traditionally known as “The Old Guard,” is the oldest active-duty infantry unit in the Army, serving our nation since 1784. The Old Guard is the Army’s official ceremonial unit and escort to the president, and it also provides security for Washington, D.C., in time of national emergency or civil disturbance.

The concerns were highlighted in an CNN article dated April 7, 2022, which stated that “The military horses that carry America’s heroes to their final resting place in Arlington National Cemetery are living in unsanitary and potentially life-threatening conditions, according to a US Army report reviewed exclusively by CNN, consuming poor-quality feed, suffering from parasites and standing in their own excrement in tiny mud lots scattered with gravel and construction waste.” The 60-plus horses of the Old Guard are rotated between two facilities in northern Virginia: a stable facility with three paddocks nestled in the Army base at Fort Myer, barely 2 miles outside Washington, and a 6-acre pasture complex at Fort Belvoir, an Army base about 30 minutes outside the city.

To obtain additional information and determine what actions may be needed, AHC staff spoke with The Old Guard leadership; 1LT Carlin Keally, US Army Caisson Platoon Leader, and Major Shahin Uddin, Director of Communications with The Old Guard. They indicated the matter had been addressed and a “detailed and systematic approach to improving the facilities and processes surrounding the care of the horses” has been developed, including the allocation of additional $2M in funds for the improvements. We offered both officers our continued support should they need anything to help them bring these improvements to fruition.

More recently we understand that funding has been held up in the Department of Defense. AHC is urging the equine community to write/call your congressional members to express you support for The Old Guard and encourage them to expediate the funding.

The American Horse Council has worked in partnership with The Old Guard on several community outreach projects over the years.