With a rapidly growing unborn foal, the transition time from mid- to late gestation can pose nutritional challenges for pregnant mares. 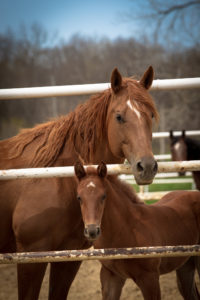 Proper broodmare nutritional management during late gestation will give her foal the best start in life. Credit: Purina Animal Nutrition

Shoreview, Minn. [February 27, 2017] – Up to 60 percent of an unborn foal’s growth happens during the last three months of pregnancy. As such, late gestation can pose nutritional challenges for pregnant mares.

“Dry mares in early gestation can be fed like a mature, idle horse,” says Karen Davison, Ph.D., Director and Nutritionist for Equine Technical Solutions at Purina Animal Nutrition. “Good quality pasture or hay along with a ration balancer or vitamin/mineral supplement may be all that is necessary to meet the mare’s nutritional requirements.”

However, during the last 90 days of pregnancy, the fetus gains approximately 1 pound per day and has a significant impact on the mare’s nutritional requirements for protein, vitamins and minerals. 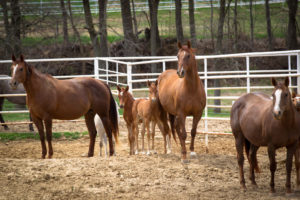 Up to 60 percent of an unborn foal’s growth happens during late gestation and can pose nutritional challenges for broodmares. Credit: Purina Animal Nutrition

Additionally, the increased size of the fetus takes up more room in the mare’s body cavity, which may result in the mare eating less hay or forage. This reduction in forage intake, coupled with increased nutritional demands of the pregnancy, requires mares to be supplemented with a nutritionally-balanced feed ration to meet total nutrient requirements.

“Even in situations where forage alone is maintaining mares in acceptable body condition, it is important they receive quality concentrate supplementation,” advises Davison. “While good quality forage may be able to provide sufficient calories to maintain body condition of the mare, other nutrients such as protein, vitamins and minerals, will be deficient.”

Research has shown foal birth weight can be negatively affected when mares are not fed adequate protein during late gestation, even when mares are maintained in fleshy condition.

“It is not uncommon to see fat mares have small, weak foals when the mares’ diets are adequate in calories but low in quality protein sources,” says Davison. “Even when mares are fed high-protein forage, such as alfalfa, the diet can still be deficient in important amino acids.”

During the tenth month of gestation, the greatest amount of mineral retention occurs in the unborn foal. Adequate trace mineral supplementation for the mare is critical for normal fetal development and provides sufficient minerals for the developing foal to store and utilize immediately after birth.

“In the first weeks of life, foals will not eat sufficient amounts of fortified feeds and may not have adequate absorption of dietary trace mineral sources at this early stage of development,” says Davison. “Proper mineral nutrition of the mare in late gestation helps ensure the foal receives an adequate supply of these important nutrients to use during very early growth stages.” 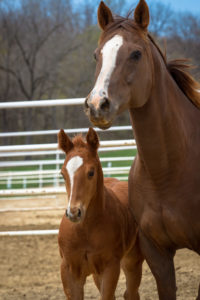 It is important to properly support good body condition through late gestation to ensure the mare is in good shape at foaling. Credit: Purina Animal Nutrition

It is important to properly support good body condition through late gestation to ensure the mare is in good shape at foaling.

“When mares are thin with ribs showing during late gestation, it’s an indication the mare isn’t meeting her own calorie requirements for maintenance. As such, it’s likely the growing foal inside isn’t receiving adequate calorie nutrition for proper development,” says Davison. “The day the mare foals, her calorie requirements increase dramatically. If the mare is thin when she foals, her milk production and the early development of the foal could be negatively affected.”

In these cases, Davison advises feeding a calorically- and nutrient-dense feed to supply the needed energy and weight gain without feeding excessive amounts of grain.

Fat mares
If a mare is significantly overweight during late gestation, where ribs cannot be seen and are difficult to feel, Davison says it is important to provide adequate protein, vitamins and minerals to support optimal fetal development without adding unnecessary calories.

For overweight mares, Davison suggests a concentrated protein, vitamin and mineral supplement designed to be fed at 1 to 2 pounds per day. This type of supplement or ration balancer will meet the nutrient needs of the unborn foal without causing weight gain in the mare. It may be necessary to restrict hay intake to 1.5 percent of the mare’s body weight if she is significantly overweight.

Proper nutritional management of the broodmare during late gestation will give her foal the best start in life. With the time and money invested in getting a foal on the ground, it’s important not to skimp on mare nutrition during this critical time.

For more information on broodmare and foal nutrition, visit www.purinamills.com/horse-feed.

Purina Animal Nutrition, LLC (www.purinamills.com) is a national organization serving producers, animal owners and their families through more than 4,700 local cooperatives, independent dealers and other large retailers throughout the United States. Driven to unlock the greatest potential in every animal, the company is an industry-leading innovator offering a valued portfolio of complete feeds, supplements, premixes, ingredients and specialty technologies for the livestock and lifestyle animal markets. Purina Animal Nutrition is headquartered in Shoreview, Minn., and a wholly owned subsidiary of Land O’Lakes, Inc.