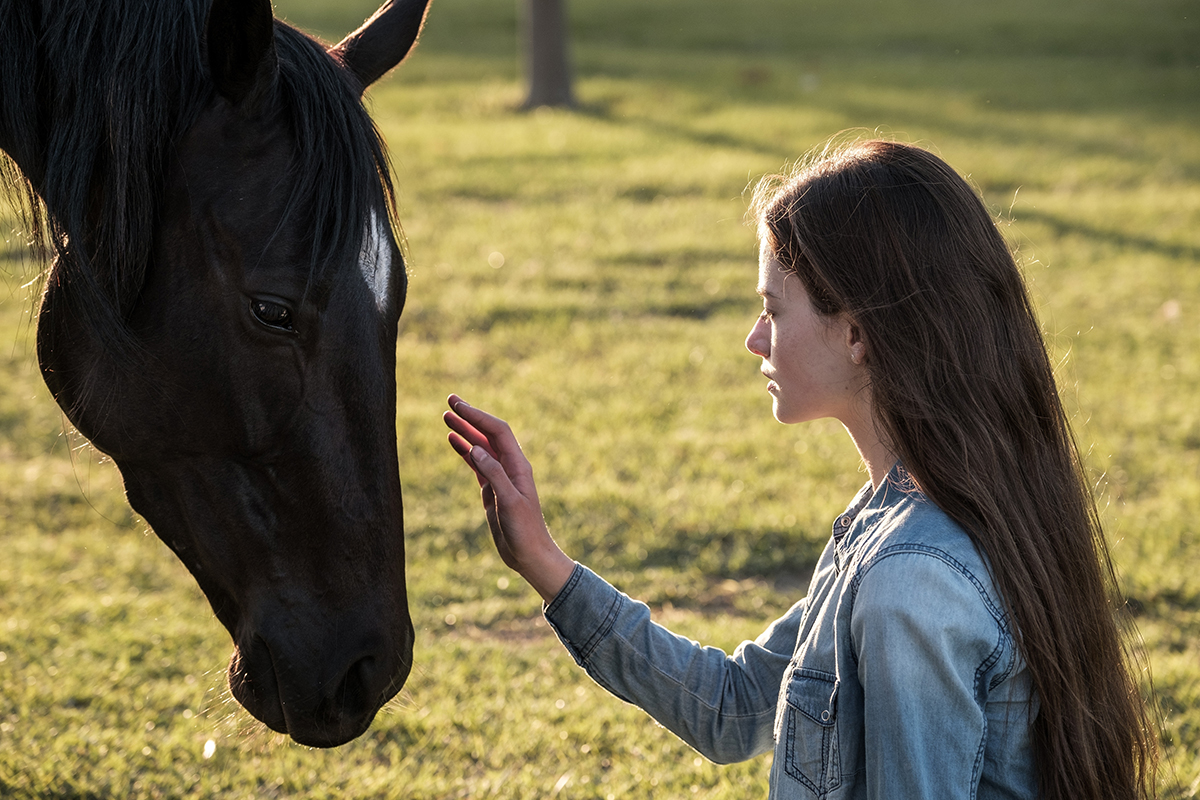 Who doesn’t love a good horse movie? This movie captured my heart from the beginning. I was pleased to see it has appeal for a mature audience as well as children. The movie’s director, Ashley Avis, wanted to appeal to the more mature audience in hopes of raising support for her newest passion in helping Wild Horses.

Ashley is a lovely woman who is so obviously passionate about horses and her mission to capture the spirit of Black Beauty in the remaking of Anna Sewell’s timeless classic, Black Beauty. As a young girl she treasured this book.  Ashley has taken the essence of the original story and told it from the angle of Beauty being a wild horse, taken from her family in a round up.

Some other changes they’ve made in the story is Beauty is a mare and Jo Green is a girl. The story is set in today’s world of horses making it more applicable to today’s viewer. Wild horses parallel the plight of the carriage horses of the 1800’s. Even though Beauty is portrayed as a Mustang, four different Thoroughbred horses were used in the making of this movie. Ashley wanted to have the delicacy of the Thoroughbred in the film.

The horses were all colored for the movie by using a horse-safe Henna dye and using hair extensions. All but one of the horses was black. The others were brown. The South African equivalent of the Humane Society as well as a veterinarian, were on the set each day of filming. Nothing was spared in caring for the equine actors.

Most of the movie was filmed in in Cape Town South Africa which is very similar to the Western US. The roundup scene with the wild horses was shot in Utah and Nevada. The carriage scene’s background was actually shot in New York’s Central Park. Then using a bluescreen and CG they added the horses that were in South Africa.

There were four Thoroughbred mares between the ages of 4 and 6 named, Spirit, Jenny, Rosie and Awards. They were trained to do the tricks in 10 weeks using the Liberty method. They used Trainer Cody Rawson-Harris from Mount White, New South Wales, Australia. “to work with the horses.

Another star performer was a well-known horse named Orion. He was a Thoroughbred, Appaloosa cross gelding that’s been in nearly every movie shot in Cape Town. He is calm, knows the drill and keeps his riders safe. Working with drones can be challenging around the horses. They used Orion for some of the more difficult scenes. Then there was Merrylegs, a Welsh Pony, and Ginger, a Thoroughbred,  another one of Beauty’s pasture mates.

Early in the movie, John Manly, played by Iain Glen, who was the trainer at Birtwick Stables, said, “The goal through this work is to help each horse find his peace.” I thought that was a beautiful statement. If only all horsemen had this goal.

Ashley was really moved by the wild horse roundup. She actually had a difficult time watching them shoot the scene. She was so touched by the plight of today’s wild horse that she adopted 2 Mustangs, Zephyra and Zion, that are currently being gentled and has another horse named Ghost, a very special Lusitano gelding.

Ashley has recently founded The Wild Beauty Foundation in hopes to illuminate issues that horses face today along with using the platform of film projects.

Watch for this very exciting movie to be released November 27th on the Disney + Channel.