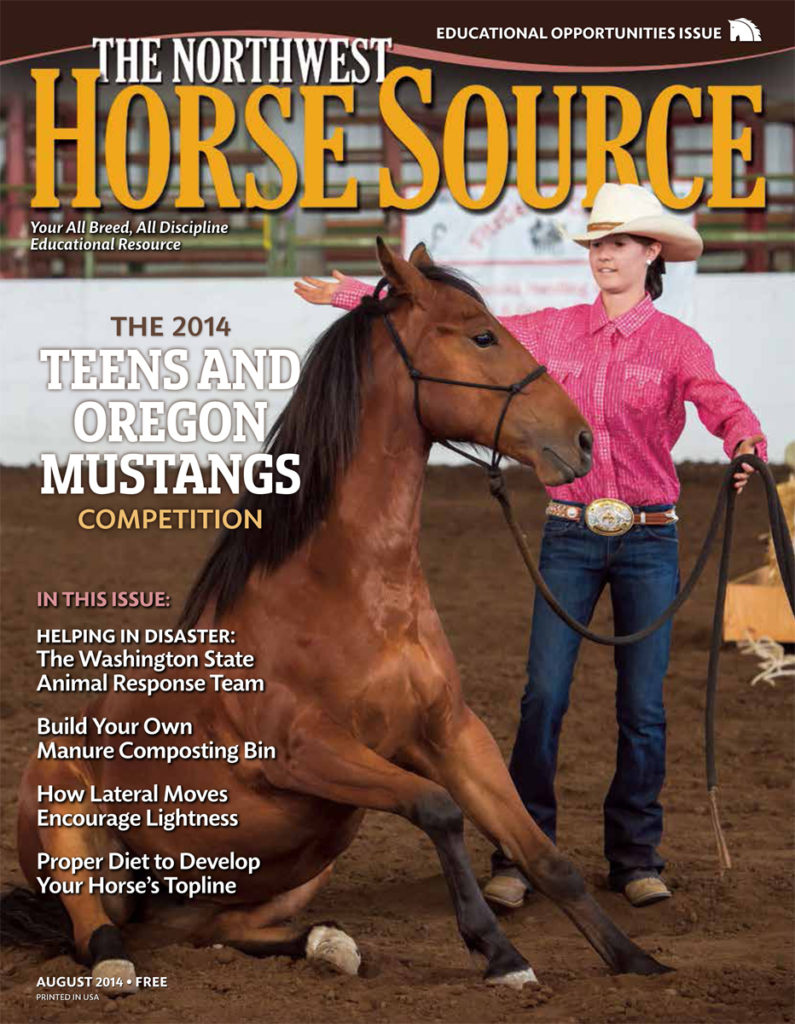 Teens and Oregon Mustangs has taken the “I want a horse one day” dream to a whole new level. Each summer they give kids (ages 10-18) the opportunity to spend their vacation doing something that most adults wish existed when they were young. They have 98 days to gentle and train a wild yearling mustang and then return to showcase their horsemanship skills and hard work while competing for prizes including the coveted grand prize saddle. A live horse auction/adoption follows the awards ceremony.

Founded by Erica and Josh FitzGerald, Teens and Oregon Mustangs is officially sponsored by the Youth and Yearling Challenge, created by Mustang Heritage Foundation (MHF) and modeled after the adult Extreme Mustang Makeover event. Along with the support of MHF, and the Oregon BLM, Teens and Oregon Mustangs is an independent 501-c3 non-profit that survives on donations from the community to help fund the event and provide trainer incentive money for the youth.

Erica was inspired to start the program after she and her husband Josh competed in the Extreme Mustang Makeover in 2008. She was excited to introduce this to the youth knowing they would learn just as much as the mustangs they were gentling. The purpose of this competition is to showcase Oregon youth and the beauty, versatility, and trainability of these rugged horses that roam freely on public lands throughout the West where they are protected by the BLM under federal law. As of January 2014, the BLM is reporting that there are nearly 40,600 wild horses and burros inhabiting lands that can only sustain about 26,500. There are another 49,272 wild horses and burros in holding facilities and long-term pastures (blm.gov).

Teens and Oregon Mustangs has adopted out over 150 horses from the Oregon BLM since it was first started five years ago.  They focus on plainly colored yearlings whose likelihood of being chosen straight from the wild is lower based on color.  They have had 100% success in finding homes for their horses and hope to continue this success into the future.  Teens and Oregon Mustangs strives to impact the lives of their trainers outside of the arena as well.  They have created a program that helps youth learn life skills like public speaking and teamwork.  Through the donations of Roger and Lynn Berg, Teens and Oregon Mustangs is able to offer up to $1,000 in college scholarships to graduating seniors.  They also are introducing a new Benjamin E. Holmes Sportsmanship Award which will be presented to the trainer chosen by their peers on the day of the event.

We are proud to announce for the first time ever, our adult division of Teens and Oregon Mustangs. This is an in-hand training competition similar to the teen program. Trainers are paired with 3-year-old wild horses from Oregon and are given the same 98 days to show us how much they can get done. We are currently looking for more adult applicants for 2015.

The 2014 Teens and Oregon Mustangs 6th Annual Youth and Yearling Challenge will be held on August 23, 2014 in the at the Yamhill County Fair Grounds in McMinnville, Oregon.  This year our 19 trainers, and 4 adults will compete in three sections: Body Conditioning, Showmanship and In-hand Trail.  Join them to support your favorite trainer or bid to adopt your favorite mustang. You can follow the journey of each trainer and mustang on our website, www.teensandoregonmustangs.org as they transform over the summer.  After falling in love with the mustangs, you can begin bidding on your favorite on our website starting at just $125.00. This works well for those who can’t be present on the day of the event.

Looking for other ways to help? We are seeking sponsors for auctioneers, judges, musicians, jewelers, award saddles, buckles, scholarships, equipment rentals and food concessions. In addition, if you’re looking for a gentled mustang, this year’s raffle horses are a yearling black and white pinto filly and a 3-year-old sorrel gelding from the Paisley herd in Oregon. They both have beautiful color and conformations, good minds, and are ready to finish in any direction. Tickets are only $5 and the two will be raffled off on August 23rd. Visit the website or Facebook page for more information on this great program. For questions, or to donate or start bidding on your next horse, email teensandoregonmustangs@gmail.com.