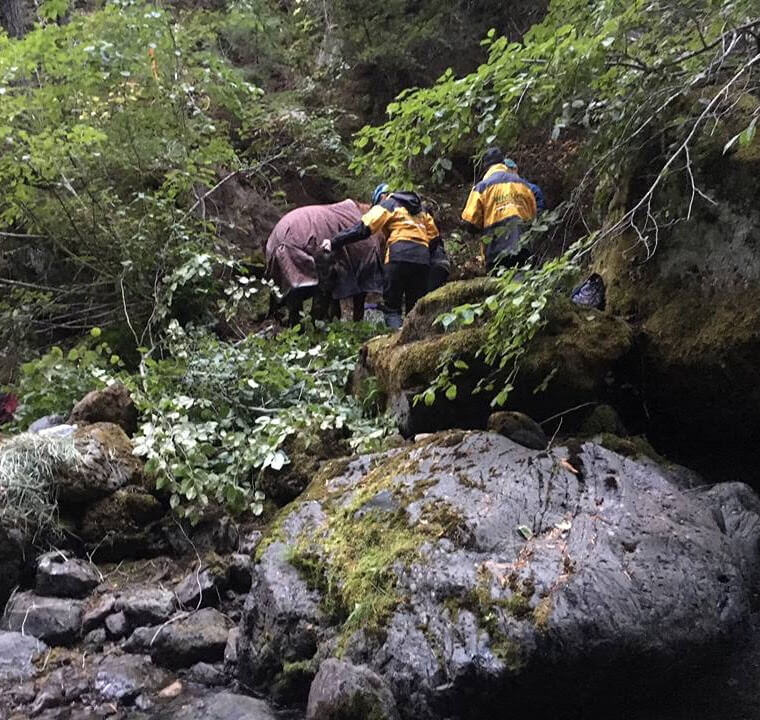 On September 22nd, we received a request to assist with locating a missing trail horse near Lake Kachess. However, as WASART doesn’t search for missing animals, we were placed on standby until the horse was located and would be activated if rescue was needed. The next day we were notified the Appaloosa trail horse named Huckleberry had been located at the bottom of a ravine near Lake Kachess in Easton, WA.

The ravine where the horse was found is cut deeply into the ground, with a creek at the bottom. Duff and underbrush covered walls on both sides are very steep and rose about 300 feet up to the trail above. Due to various obstructions, there was no way to walk the horse upstream or downstream. A technical raise was not feasible due to the number of trees in the way and the distance. It’s Forest Service land, and even if permission was granted to cut the trees, it would have taken longer than the horse could afford to wait.

We asked King County’s Regional Special Vehicles Unit if they could help with some of our rescue equipment, should we need to ferry it up the trail. The equipment is heavy and cumbersome and we knew the trail was steep going in. Unfortunately, the trail was determined to be too narrow for the unit’s ATVs to be used but we’re grateful RSVU were there to assist had it been possible.

The horse had also sustained injuries before we arrived. He had some lacerations on his legs and may have had internal injuries that we could not assess. He was standing in a creek with little option of escaping due to the topography. In short, the options were to attempt a helicopter extraction or to euthanize.

Our team was boots on the ground early on September 23rd which included two of our member veterinarians and a licensed vet tech (LVT). We offered, and were granted permission by the owner, to do first aid for the horse: the lacerations were bandaged and vital signs were checked. The owner was able to arrange for a non-WASART veterinarian, Howard Friedman, DVM, of Cougar Mountain Veterinary Hospital to come on scene later in the evening to help the owner and Huckleberry get through the night.

In an effort to get Huckleberry out of the chilling creek water and to a dry patch, the team found a spot that could be cleared of brush and rocks to allow the horse to stand or lay without furthering hypothermia. Then, with some excellent horse handling skills from the owner, Huckleberry made it out of the creek to the flat spot.

The owner requested the assistance of a private helicopter and was granted permission from the Forest Service to make the attempt. There was a limited amount of daylight left and the pilot made the call to wait until morning.

We had an honest talk with the owner about our thoughts on the only two options available for the situation, i.e., humane euthanization or helicopter extraction. The owner put the first option on the back burner for the time and understood we did not have training or equipment to execute the second option. We returned to the staging area, conducted a debrief, and headed home late that night. The helicopter extraction was planned for early the next morning by Hillsboro Aviation.

The assessment of the injuries was not what we and the owner and her friends had wanted and Huckleberry was humanely euthanized several hours after he arrived.

Huckleberry was a valiant horse who tried so very hard for his owner. Everyone involved in this deployment are saddened by the ending. Our condolences to his owner and everyone who knew and loved him.

About WASART
The Washington State Animal Response Team (WASART) is a 501(c)(3) nonprofit all-volunteer organization that helps companion animals and livestock out of immediate crisis and dangerous situations. WASART is trained to help in situations such as if your horse is trapped in a well, your dog falls over a cliff, or your community needs help sheltering animals for short-term issues, like threat of fire. WASART does not self-deploy, and the team must be called out by an owner or an agency, such as the fire department, sheriff’s office, or emergency management.

We respond to disaster and emergency situations involving all domesticated livestock and companion animals. We are not trained to handle wildlife or exotic species. Learn more on our website: wasart.org.