Many riders have experienced the annoyance of a horse who “jigs” by taking small, tense trot steps. The horse refuses to walk and may sway his hips from side to side. Jigging may be accompanied by head tossing, pulling, tongue and mouth problems, and may escalate into rearing or other forms of dangerous behavior. Jigging can be seen in trail horses on their way back to the barn, in dressage horses making a transition from extended walk to collected walk and in pleasure horses preparing to make a canter transition from the walk. Horses who jig wear themselves out and cover little ground. The jiggy steps may only last for a few strides or, in the case of some trail horses, the jigging can last for hours, exhausting both horse and rider. Often, the horse’s rider attempts to produce a walk by pulling on the reins, halting, or backing his horse. This only makes the problem worse.

If you think of a jig as a small step it is not logical to pull back on the reins because the horse already isn’t going anywhere. The neck shortens and tightens which results in back tension and tight restricted steps. We can’t make the neck long and relaxed unless we let go of the reins – at least for a moment. The more the rider pulls back on the reins the smaller the steps become building tension. What the jigging horse wants is to GO – back to the barn, back to his companions, or just because of too much nervous energy. What we want to do is create a longer, slower, more relaxed stride, and change the gait back into a four beat walk. 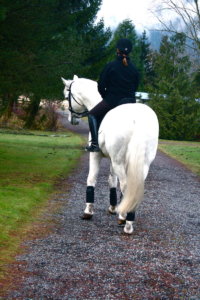 There are only two ways to make a horse take longer steps: The first way is to send the horse actively forward, as in a posting trot or ground covering canter. The second way is to make him step laterally under his body. Lateral steps can be created through bending exercises such as circles or shoulder in, or simple sideways movements like leg yield or turn on the forehand. To be really effective, we send the horse both forwards and sideways at the same time, as in a leg yield in the trot. Both these techniques result in the rider letting go of the horse’s face and applying his leg, which creates a longer step in the horse. A horse ridden forward with a long stride and a soft rein eventually becomes relaxed. 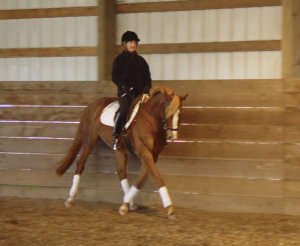 Train your horse to make lateral (sideways) steps in a calm, controlled environment such as an arena or flat field. Begin by teaching a simple turn on the forehand. The turn on the forehand moves the hips in a larger circle than the shoulders and can be started on the ground by using your hand on the horse’s side to ask him to move his hips a few steps away from you. Once your horse understands how to move his hips in a turn on the forehand, you can begin to develop a leg yield, where the horse moves both sideways and forward. The leg yield training begins in the walk, but is most useful once it can be performed in the trot. The horse should clearly reach his hind and front legs forward and across when asked to move sideways. This action both supples the horse and creates that big step. The horse must receive an immediate release of the leg and hand when it responds correctly, and should be allowed to go straight and forward. Once the sideways response is confirmed, it can be used in the moment the horse begins to jig.

It is important to note that the rider of a tense horse must also be aware of his own body – tightness in the arms, hips, and legs can create tension in his horse which could result in jigging.

When we are trail riding it isn’t always possible to ride forward into the trot or canter due to steep or rough terrain, but it is almost always possible to ride the horse sideways for a few strides. The dressage rider and pleasure rider can respond to the jiggy moment by riding a few steps of leg yield, shoulder in, turn on the forehand or a small circle until the horse returns to a walk. Eventually the horse learns that short, tense steps will be pushed forward into long sideways steps and the jigging will diminish.

Respect in the Stall
Selecting a Trail Horse