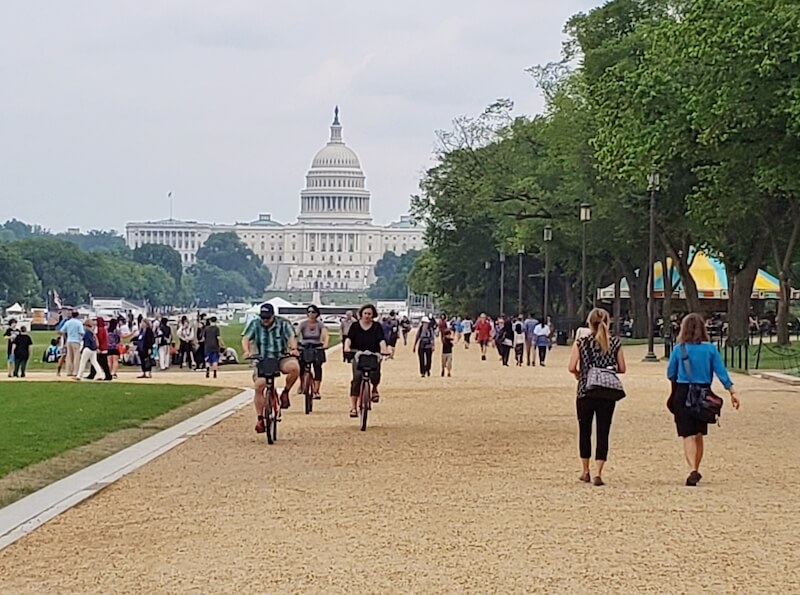 The title might sound like the beginning of a joke but it’s actually a real description of the most recent chapter of a powerful Washington State recreation partnership.

In June, Washington Trails Association (WTA) advocacy director Andrea Imler, Back Country Horsemen of Washington (BCHW) president Kathy Young, and Yvonne Kraus, Executive Director at Evergreen Mountain Bike Alliance (EMBA) journeyed to the other Washington. The three women all represent different trail user groups — hikers, mountain bikers and equestrians — but were there for the same reason: to speak up in support of public lands and trails.

From the outside (and in some other states), hikers, bikers and equestrians may not seem to share a lot of common ground. But WTA, EMBA and BCHW have long-standing partnerships. It’s true that each wants trails that their users can recreate on, but more importantly, they all want sustainable trails and access to public lands for everyone.

It’s evident that there would be an abundance of overlap when you look at the visions of the three organizations:

As Yvonne Krauss explained, “When we can overcome a few differences in our organizations’ missions but find our common goals and share these with our leaders, we solve issues for them.”

Indeed, all three organizations share a common goal: as more and more people look to recreate on Washington’s public lands, land management agencies need to have the funding (at both the state and federal level) they require to maintain trail infrastructure and access. This was a huge reason behind the joint trip to Washington, D.C.

As WTA’s Andrea Imler put it, all three organizations wanted to convey the need for “trails as a must-have rather than a like-to-have.”

In Washington D.C. they met with six of Washington state’s representatives and its two senators to advocate for fully funding both the Forest Service and the National Park Service. State and federal land management agencies are underfunded and face recreation and maintenance backlogs in excess of $900 million. They asked policy-makers to show support for the Restore Our Parks Act which would “establish, fund, and address the maintenance backlog of the National Park Service, and for other purposes.” They met with recreation and trails staff for the United States Forest Service headquarters in D.C. to talk about how important Washington’s national forests are for recreation.

“We spoke up for continued trail and outdoor recreation facility funding and encouraged legislators to support the Forest Service at a time when fires have decimated forest health and poor condition of access road to trailheads is threatening even more closures over the next decade,” said Yvonne Krauss.

It was also important to thank Washington State’s entire delegation for championing the recently-passed public lands package which included permanent authorization for the Land and Water Conservation Fund (LWCF). Senator Maria Cantwell in particular worked tirelessly to get this bill passed.

Every meeting highlighted the impact of trails and recreation on the local economy. Outdoor recreation generates 201,000 direct jobs and $21.6 billion consumer spending in our state. (A recently released report shows that in 2018, 8.4 million visitors spent an estimated $506 million in local gateway regions while visiting national park lands in Washington.) Data like this helps lawmakers prioritize our public lands when making budget and policy decisions. WTA, BCHW and EMBA made sure that legislators were reminded that our public lands are an economic powerhouse.

“As a group, I believe we have a better ability to show that we stand together for trails,” said Kathy Young. “Certainly, we have differences, but by coming together we show that we are willing to have dialogue, help and support each other when and where we can, and expect our legislators and agencies to do the same.”

More events are listed at www.bchw.org/lnt/main/upcoming_events.htm

Back Country Horsemen of Washington is dedicated to keeping trails open for all users, educating stock users in Leave-No-Trace practices, and providing volunteer service to resource agencies. To learn more about BCHW go to www.bchw.org Keep up with BCHW and issues and events we are following on our state Facebook page www.facebook.com/public.bchw