One horse’s will to live became an inspiration to many 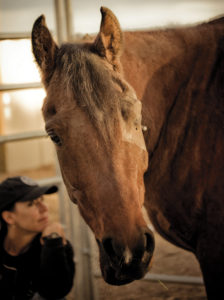 The working horses of Crystal Peaks Youth Ranch outside Bend, Oregon don’t have performance pedigrees. They don’t round up cattle or help hold wily calves. For their job of equine counselor, this motley crew need only the basics — two eyes and four good legs. One special horse doesn’t even have those.

Of the 30 horses that live year-round at this rescue and youth ranch, 85% have come out of heartbreaking situations. They are the undesirables — horses abused or abandoned by ignorant, cruel, or desperate owners. Since 1995, the nine-acre ranch has been instrumental in rehabilitating hundreds of horses. Some find a permanent place in the ranch’s award-winning youth program.

“We don’t rescue as many horses as we used to,” says co-founder Kim Meeder, “but we try to keep two spaces available at all times.” One of those spaces was called upon last fall in the rescue of a young Arabian.

The Will to Live

The small bay gelding surprised hunters in the Cascade Mountain Range last October when he wandered into their campsite late one evening. Wearing a blood-soaked halter and dragging a lead rope, he could have stepped straight from a horror movie. Most obvious was his left eye, hanging useless from its socket against a neck heavily encrusted with blood. Instead of being fearful, the horse was calm and friendly, snuffling the men for any food they might offer. Search and Rescue transported the gelding to Bend Equine Medical Center. The story that has since unfolded continues to shock, move, and inspire the lives of everyone it touches.

Led by equine surgeon Dr. Wayne Schmotzer, staff thoroughly examined the gelding. Besides severe dehydration, a loss of half his blood volume, and a festering leg wound, x-rays revealed the horse had been shot — twice — in the head. Though dozens of pieces of shrapnel were embedded in the skull and surrounding tissues, both bullets had miraculously missed the horse’s brain. His jaw broken and left eye destroyed, the young gelding had been wandering for weeks in the alpine wilderness. 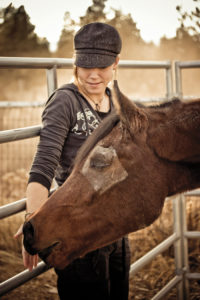 Meeder was contacted by the veterinary hospital just six hours after the horse arrived at the facility. At the time she thought she had seen everything in fourteen years of horse rescue. She was wrong.

Instead of the frantic behavior one would associate with the animal’s devastating condition, Meeder found only a kind, trusting spirit.

“He was bright, positive. It was obvious this horse wanted to live.”

On the surface it might have appeared the gelding was a good candidate for humane euthanasia. According to Dr. Schmotzer, who accepted full responsibility for the horse’s care, this was not an option.

“I have seen a number of gunshot animals over the years. I have never experienced a case like this. We did not consider euthanasia. There was a wrong here that needed to be righted.”

Meeder acknowledges that each rescue situation is different. The horse’s ultimate well-being is paramount. “There are situations where putting a horse down is in its best interest. Just because you can [rescue] doesn’t mean you should. He wanted to live,” she says simply of the gelding later christened Hero.

After surgery and months of treatment, Hero was donated to the ranch, where he continues to recover from a systemic infection brought on by an untreated puncture wound in the leg. After over a year of treatment, the wound is finally healing. Hero’s unanimous prognosis is that he will be completely sound and suitable for regular athletic use. Ridden or not, his work with people is well under way.

“This horse grabbed me from within more than any in recent memory,” says Schmotzer. “He was helpless and still so forgiving.”

When newspapers broke Hero’s story in December, the ranch was inundated with thousands of letters, emails, and well wishes from around the world. People everywhere found inspiration for life from the little horse that refused to die. Meeder remembers one letter in particular, a simple message scrawled on a Post-It note and stuck in an envelope with no return address: I was thinking of ending it all until I read about Hero. I have decided to change
my mind. Thank you.

“Hero has an incredible ministry to those who are suffering,” says Meeder.

Meeder knows suffering. She also knows miracles. They happen every day in the unassuming dust of her eastern Oregon ranch. They happen between instructors, horses, and needy children of every sort.

“It’s all about relationships — changing from the inside out.”

The ranch is open from April to November and accommodates up to 60 sessions or lessons a day. It is a program committed to “one horse, one child, one instructor.” 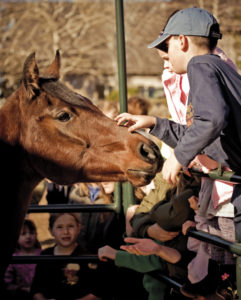 Does a one-eyed horse have a working future?

“Absolutely. This horse will be in our program,” says Meeder, adding that Hero’s disposition is intuitive, kind and accepting. “He acts like he’s lived his whole life with only one eye.”

Faith, hope, and love do not require perfect vision.

Hero’s recovery was made possible by the enormous generosity of Bend Equine Medical Center, which donated $13,000 in veterinary care. “It is a privilege, not a right, to own, enjoy, love and care for a horse; discarding them inhumanely is not one of those privileges.” – Dr. Wayne Schmotzer

Why Isn’t My Advertising Working?
Keep the Door Open