On July 1 Kathy Lockerbie, owner of Silver Creek Icelandic Horses in Bellingham WA, walked into the pasture to check on her pregnant mare Aska. Much to her surprise, she found two pinto babies. The small black and white filly tottered about looking for milk and a tiny grey and white colt lay motionless in the field. She immediately called her veterinarian, Dr. Don Beckman, who asked if both foals were alive. When told they were, he responded “Well, you have already beat the odds.”

Little did Kathy know how great those odds really were.

Upon arrival, Dr. Beckman of Mt. Baker Veterinarians found the filly, weighing around 75 pounds, nursing but the colt, weighing only about 50 pounds, struggling on the ground. The colt needed milk as soon as possible both for nutrition and the colostrum required in the first 24 hours of life to develop normal antibodies. Typically a mare only produces enough colostrum for one offspring so the horse owner of twins may need to purchase additional, expensive colostrum.

When several attempts to get the colt to nurse failed, Dr. Beckman and Kathy’s daughter Helen inserted a gastric feeding tube down the colt’s nasal passage. Kathy was instructed how to milk Aska and express the milk through the feeding tube into the colt’s stomach. The colt, now named Bróðir (Icelandic for “brother”) required supplemental gastic feeding every two hours for the first three days. By the third day, Bróðir was able to nurse on his own despite filly Systir awkwardly kicking at him.

Twinning in horses is almost always the result of a double ovulation (identical twins are extremely rare in horses). Double ovulation rates vary by breed—30% in thoroughbreds, Warmbloods, draft horses, Arabians; 5% to 10% in Quarter Horses; less than 1% in native British ponies; unknown in Icelandics. The chances of a double ovulation are higher for young mares age 6 to 8, non-lactating mares, older, previously barren mares and mares with a genetic predisposition for twins. While watching horse twins play is ever so heartwarming, Dr. Beckman says, “Twins are trouble.” 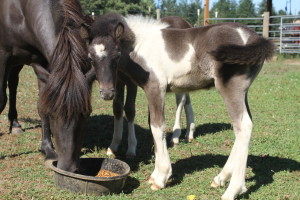 Brodir is now a healthy colt.

Unfortunately, a mare is not designed by nature to support two fetuses at the same time. The placenta almost always provides only enough oxygen and nutrition for the healthy development of one fetus. The statistics for survival of the mare and both twins after birth are daunting: less than 1 in 100. If one considers the abortion rate after conception, the actual odds are more like 1 in 100,000 (long term survival of mare and twins). Most often, one of the twins is naturally aborted in mid to late pregnancy, usually the smaller one. Premature birth, retention of placenta, death of one or both twins, deformities, development of laminitis in the mare, difficult labor resulting in trauma, decreased likelihood of pregnancy during next breeding season, and even death of the mare are all associated with twins. Even if the foals survive, they may remain weak, underdeveloped and fragile. Twins are usually a heart breaking and expensive scenario for the owner.

Dr. Beckman suggests that a mare get an ultrasound 14 to 16 days after breeding. If twins are detected, one of them can be manually reduced with a success rate of the other twin surviving of about 100%. After 25 days the procedure involves aspiration of one twin with a greater chance of complications and the success rate drops to 40 to 70%. As the pregnancy advances, interventions become more involved with even lower success rates.

Kathy was lucky in her choice of breeds. Icelandics—a gaited breed capable of walk, trot, canter, tölt (rack), and flying pace—are an ancient, hardy breed. When Norse settlers sailed to Iceland in the late 800s AD, they took their best stock. Extreme conditions including severe winters, volcanic eruptions, and limited forage resulted in the development of a thrifty, intelligent breed. Icelandic mares are typically quite fertile. Under old style Icelandic husbandry practices the mare Krossa, at age 34, birthed her 31st foal. All of her offspring survived despite the fact that she had never been stabled. 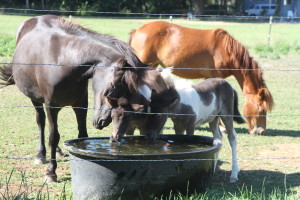 World Fengur, the stud book of the Icelandic horse, records 20 sets of twins that were born and survived worldwide from 1999 to 2013. Kathy’s twins are the first in North America. Researchers at Hvanneyri Agricultural University in Iceland found that an Icelandic mare in good condition produces more milk for her size than many other breeds. Of course, quality food and supplements can result in higher quality and quantity of milk production. Kathy fed Purina Omolene #300, a supplement for lactating mares, to Aska for the first two and one half months.

At four months of age, Bróðir and Systir are thriving. Systir is almost normal weight for her age and Bróðir is gradually catching up. Their mother Aska is also in good condition. Dr. Beckman only needed to make two visits to the farm, one to insert the gastric tube and one to remove it. Kathy has started working with the twins on basic halter training. Bróðir and Systir have the typical easygoing Icelandic temperament of their sire Lani from Aflasaga, although Systir continues to kick her brother when he nurses.

Kathy is so grateful that her Icelandic horse family beat the odds. Since Aska may be at higher risk to have twins again, Kathy plans to use ultrasound around 15 days into the next pregnancy and take the appropriate steps to avoid them, if necessary.

For more information about the Icelandic twins contact Kathy Lockerbie at silvercreek-icelandic-horses@hotmail.com Share in the drama of the first three days of Bróðir and Systir’s life at https://www.youtube.com/watch?v=xd-SactnSDo.

Author’s bio: Retired from the software industry, Pamela Nolf enjoys sharing adventures such as jousting, mounted archery, trail riding and dressage lessons with her Icelandic horse Veigar frá Búðardal (Blessi). You can read more about life with Blessi at www.blessiblog.blogspot.com

Retired from the software industry, Pamela Nolf enjoys sharing adventures such as jousting, mounted archery, trail riding and dressage lessons with her Icelandic horse Veigar frá Búðardal (Blessi). You can read more about life with Blessi at www.blessiblog.blogspot.com