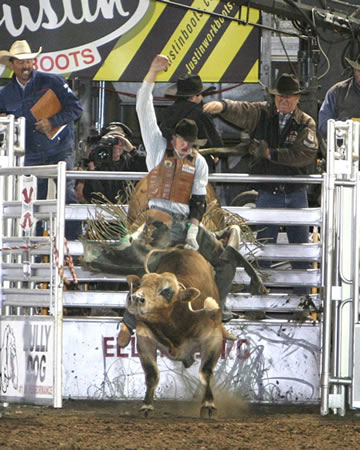 The road to the 2017 Xtreme Bulls Tour Championship ends in Ellensburg Saturday, Sept. 2.

The PRCA’s Xtreme Bulls Tour will end with the event featured as a live webcast on The Wrangler Network at www.wranglernetwork.com. Forty of the world’s top bull riders will converge on the Ellensburg to take their shot at an $100,000 purse.

Ellensburg will also welcome the biggest, meanest, rankest one-ton athletes in the world. These bulls have thrown cowboys at the largest rodeo venues in the world, including the Wrangler National Finals Rodeo in Las Vegas, Rodeo Houston, San Antonio Stock Show and Rodeo, Cheyenne Frontier Days and more.

All 40 riders will compete in a long-go competition. Following the long-go, the top 12 will be immediately brought back for the short-go, where the Ellensburg Champion and 2017 Tour Champion will both be crowned.

“The Xtreme Bulls is such a good thing for these guys. It’s a great time to be a bull rider,” said Donnie Gay, eight-time world champion bull rider and TV analyst. “I love the format, and I know for a fact these guys love the format.”

There are 43 PRCA Xtreme Bulls events in 2017 with a combined payout of $749,000. Money earned on the Xtreme Bulls Tour counts toward PRCA World Standings, which determines Wrangler NFR qualifiers.

Last year, Rorey Maier, of Timber Lake, S.D., won the Xtreme Bulls Tour Finale with a two-head average score of 174.5 points. It was the first Division 1 Xtreme Bulls win of his career.

It wasn’t the only award. The Ellensburg Rodeo was named the PRCA Xtreme Bulls Event of the Year in 2016, based on bucking stock, quality of the facility, and how memorable the event was.

The gates for this year’s finale will open at 7 pm and the show starts at 8 p.m. The event will be webcast on The Wrangler Network at www.wranglernetwork.com.