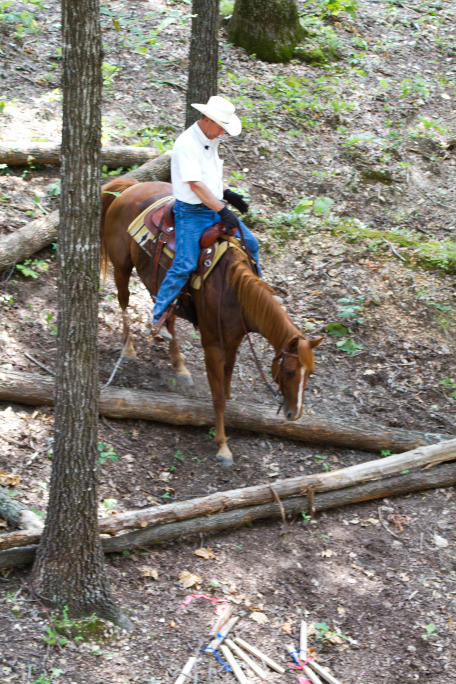 As with most technical challenges, proper training makes the impossible possible.  My latest book, Extreme Mountain Trail Course by Mark Bolender is built on the Rush Spring Ranch in Missouri. It is visually beautiful and challenges the best of the best in Extreme Trail.  After several weeks I held my first clinic on it.

Before we formally began, the participants tried some of the obstacles and concluded they would be impossible to navigate safely. Fast forward to three days of training later – not only were they navigating well but the horses developed bold, confident and calm demeanors. The riders were also on a loose rein with broad smiles across their faces. Here’s how that was accomplished, and how you can also master the most extreme obstacles in a safe manner.

Inside Rush Springs Ranch we started with simple obstacles. These consisted of poles and layers of poles and logs (which I call a Scrambled Puzzle), teeter totter and other obstacles which helped to establish confidence and boldness in both the horse and rider.

I did not allow the participants to move onto the more difficult obstacles in the course until the simple ones were mastered.

The most crucial skill the participants needed for the second day was developing leadership. The second skill was to learn to trust their horses’ instinct – and to trust me. I was asking them to navigate certain obstacles which they already concluded would be impossible. Thus, overcoming that belief (which is often self-fulfilling) by instilling confidence was enormously important to the participants.

Day two started out hot and clear on the course but everyone was excited to begin. We started out driving the horses over and through several obstacles that were very similar to the day before.  After several hours of work the horses and participants were becoming confident in navigating the obstacles in-hand. No one had mastered the balance beam but the rock steps and step downs were coming along well.  By working in-hand the participants clearly saw that the obstacles could be navigated, and this gave them confidence in the horse. The horses were asked to “think it through” instead of being pushed from the first moment they saw the obstacles. This is a very different approach in obstacle training but the results can be astounding.

Before long the horses were so bold and confident that they were pushing to go on their own. The next step was putting the riders on the horses and soon after that the horses were walking up and down the log and rock steps on a loose rein.

Remember that the key to success—trust and confidence— starts on the ground.