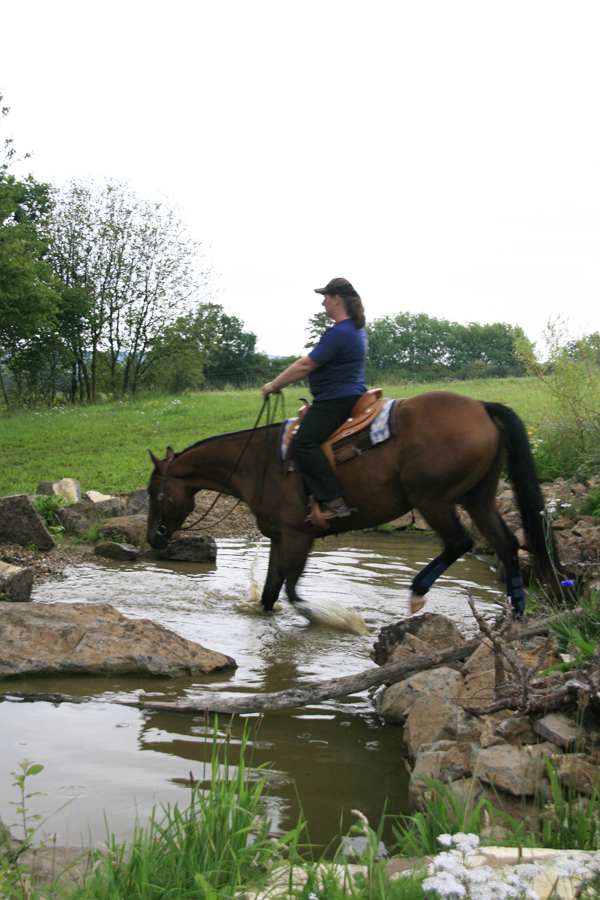 Help Your Horse (Safely) Confront His Fear of Water

Nearly every equestrian has experienced a horse with water issues. Often I’m told by owners that no matter what they try their horse will refuse to enter water, or else it will leap the smallest stream or even a puddle in the road. Some horses are worse than others. Not only is this frustrating, but it’s dangerous for the rider and those nearby. Recently, while riding a three-year-old near Mount St. Helens in Washington State, I came to a very small stream and the horse refused to cross. It seemed as though the water was some kind of monster, to be avoided at all costs. But what’s really amazing is that only a few minutes earlier that horse had crossed an entire river!

Horses are remarkable animals with incredible minds. We know with certainty that they think, but nobody knows what they think. And surely they don’t have the same logic patterns as humans. I consistently see horses at my clinics that exhibit all kinds of “illogical” learned behaviors regarding water avoidance. Once such a behavior has been allowed and reinforced it’s always a challenge to get the horse to focus on a water crossing because it will use all of its tricks to avoid the water. So how do we fix this problem?

Before I even begin to address water avoidance issues with a horse I work on creating—and maintaining— the “Bolender Bubble.”  This is establishing my personal space, which the horse is not allowed to enter under any circumstance. I use techniques to establish myself as the alpha mare, which lets the horse know I’m worthy of leadership. This superiority forms the basis of the Bolender Bubble and until it is clearly recognized I would be at a much greater risk of injury when approaching a water obstacle. Once I have established my personal space and approach the water, my only thought becomes “you can do this.” I never approach thinking “you will do this.”

My next step is to allow the horse to approach the water on its own. Horses with a strong learned avoidance behavior will often bolt at the first sight of water and the primary behavior is the horse pushing into my space – literally moving on top of me to push me aside. When you move over with the horse’s weight, its pressure is released for a moment, telling it that this is a way to avoid the water. In that situation, the horse essentially is in control. That’s why the Bolender Bubble must be clearly established in the beginning. If you understand this behavior in advance you will know what to look for and you’ll be much less likely to move your feet in response to the animal’s push.

Always remember that the less you move your feet, the better off you are. In the horse’s mind, if you move your feet – as though to step aside— you are not superior. You are inferior and not worthy of respect. This is part of their natural body language and instinct. It’s not about authority, respect, or who can dominate. It’s a test the horse conducts instinctually to see if you are worthy of leadership in confronting the water monster. You must be the leader who can motivate the horse to do great things, like facing its fears. And the magic doesn’t end with water; any obstacle can be conquered using this understanding of the horse’s behavior.

Once all the avoidance behaviors have been blocked, allow the horse all the time it needs to touch the water, step back and forth, paw, blow, stomp, etc. This is all an effort to think the situation through.  The only behavior I don’t allow is for the horse to go forward or back into my Bolender Bubble. While it is thinking and considering, I do not request that the horse advance further into the water. They need time to process what they’re doing. I’ve found that it will take a problem horse about 30-60 minutes to step quietly into the water using this method and it works similarly for small puddles, streams, and water step-downs.