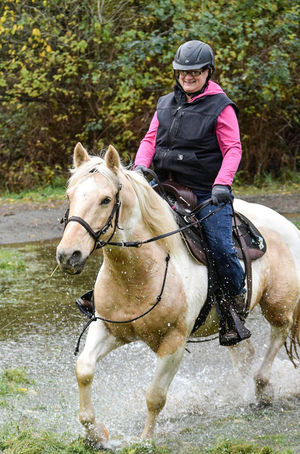 Duo to compete in the Craig Cameron Extreme Cowboy Race

Lynn Jenkins/ for The Reflector

RIDGEFIELD – They are an unlikely dancing pair. One a human. The other, a horse. One looking to reconnect to the world. The other trying to hide from it. The only thing they had In common was fear.

“It is like we are dancing to a song that only we can hear,” says Eckenrod. “Part of the time Scooby is leading and part of the time I am. When we are on a trail course nothing else matters but him and me. It is our communication that makes what we do special.”

How special? Eckenrod is planning on tackling the difficult “extreme” trail obstacle course while riding Scooby bridleless. That is right, no bridle, just her and her horse and their ability to communicate with one another.

According to Eckenrod it is more than “months and months of work, and hours upon hours spent in the saddle” she and Scooby have travelled to the moon and back to get where they are today.

Eckenrod, a former barrel racer, was looking to overcome her fear issues and get back to her first love – riding horses. Scooby, an 8-eight-year old, palomino paint gelding of undermined breeding (possibly mustang) wanted nothing more than to be left alone.

Actually they had more thing than fear in common. Both Eckenrod and Scooby had been given a death sentence.

In 2003, Eckenrod had been told by her doctors that she only had a couple of years left to live due to heart complications brought on by Graves Disease and her Diabetes. It was then she took control of her health, made the changes necessary and put her health first and concentrated on getting better.

Fast forward to 2012, and her Graves Disease is under control and in remission. However, she no longer has the endurance, strength, balance and flexibility that she used to have.

“I knew I wanted to start rebuilding my life and I knew it needed to be with horses,” said Eckenrod. “Without a horse in my life, a piece of me was missing. But I was afraid. Could I actually get back on one? Would my body hold up? I was concerned not only about by ability to ride, but did I have the energy to do all the work that goes into owning and caring for a horse. I decide to go for it.”

It was not love at first sight.

“He was a very fearful, raggedy dirty mess,’’ said Eckenrod. “According to the gal who brought him to me, Scooby was a failed bucking bronc that had been rescued from a kill pen at the Horse Auction in Sunnyside (WA). His body was covered in scars. Twelve scars on just his face alone. I know it was 12 because I was counting as I kissed each one.”

Starting slow and hoping to build trust, Eckenrod worked with Scooby on the ground in a round pen. Finally it was time to mount up.

“He sent me to the trauma center in an ambulance that day,” said Eckenrod, quickly explaining it was her fault. “I was wearing spurs and I caught him on his side with one as I was mounting. He completely freaked out and went ballistic – running, bucking, rearing . . .”

Luckily, Eckenrod only suffered deep bruises. But it was while in the ambulance on their way to the trauma center that her husband Frank finally agreed to send Scooby out for professional training.

“Never, ever again. In fact, I don’t even use a bit,” said Eckenrod, choosing instead to use a bitless bridle. Now at the Craig Cameron Extreme Cowboy race she is going to premier their first trail competition without even a bitless bridle.

After 60 days with Shelby Ahrens (Ahrens Horsemanship) Scooby came home able to be ridden at a walk, trot and canter. Everything else was going to be up to Eckenrod.

“In fact, we had just gotten him back from the trainer when I entered him in our first trail competition,’’ Eckenrod said. “It was at the competition I realized we did not even have a backup on him. We starting training it right there at the event.

“It was like we had a light bulb moment,’’ Eckenrod added. “Between us, we figured out how to communicate quickly and effectively. I started noticing that if Scooby was nervous or scared of an obstacle all I had to do was tell him it was OK and he believed me.

“It is like all the tension leaves his body as soon as I tell him it is OK and he calmly performs the obstacle. I have his complete trust and I will never break it. I have promised him that I will never ask him to do something that is unsafe. I have actually sacrificed the points on different obstacles and chose not to perform them because I did not feel they were safe for us,” said Eckenrod.

This year will be their fourth year for them competing in the Craig Cameron Extreme Cowboy Race. No longer scared rookies, this nationally ranked duo will dance to their own beat at the race. According to Eckenrod, precision and doing the course to best of their ability has always been more important than speed. And there are some obstacles that they simply cannot perform due to her physical limitations.

“This year, speed is going to be even less important as we go through the course bridleless,’’ she said. “We may not bring home the top prize, but I know we will be winners at the end of the day to have come so far in our journey together.”

Eckenrod and Scooby, definitely qualify as a “Can’t Miss” demonstration at the Washington State Horse Expo. Area horse enthusiasts can catch their runs during Friday’s and Sunday’s Craig Cameron Extreme Cowboy Race when they tackle the course without a bridle.

Advance discount tickets are being sold at participating Wilco Stores. Visit www.wastatehorseexpo.com for more information about the Horse Expo and tickets.