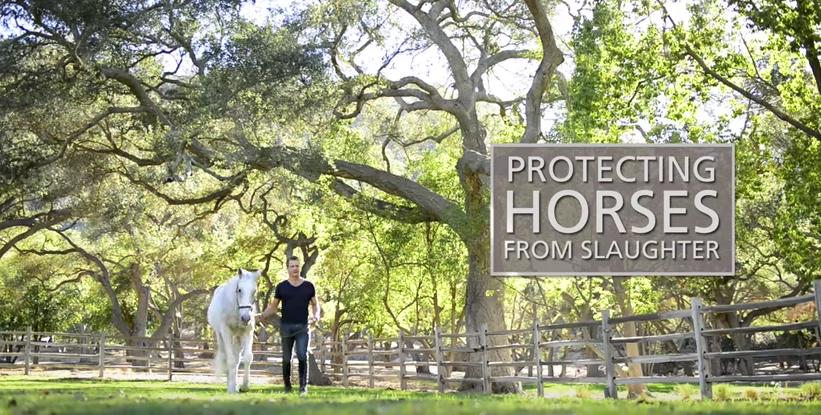 Sebastian Roché, television star and horse enthusiast, has released a PSA campaign with The Humane Society of the United States to speak out against horse slaughter. Best known for his roles on General Hospital and The Originals, Roché is also a dedicated horseman and appears in the video PSA with a horse from A Little Rescue in Hidden Valley, California. Roché is set to appear in Amazon’s The Man in the High Castle and HBO’s upcoming miniseries, The Young Pope, starring Jude Law and Diane Keaton.

Roché has joined The Humane Society of the United States’ campaign to protect the more than 100,000 American horses who are inhumanely slaughtered for human consumption each year. The majority of these horses are young, healthy animals who could have led productive lives with loving owners if they’d been given the chance. Last year, The Big Bang Theory‘s Kaley Cuoco joined the campaign with an emotional video PSA.

The Safeguard American Food Exports (SAFE) Act, which Roché urges Congress to pass, would outlaw the slaughter of American horses for human consumption on U.S. soil and abroad. It has the bipartisan support of 192 House cosponsors and 30 in the Senate. Last month, the U.S. House Appropriations Committee voted to adopt an amendment to block horse slaughter from resuming on U.S. soil. A similar amendment is expected to be considered in the Senate Appropriations Committee, and The HSUS urges both chambers to pass the measure and prevent the use of American tax dollars for this cruel practice.

Roché made the following statement: “Protecting horses from slaughter is a bipartisan, common sense issue that we can all support. Every aspect of horse slaughter is nothing but torture for these sensitive animals, and the majority of these horses are young, healthy animals who could have led productive lives with loving owners if they’d been given the chance. It is senseless to use the tax dollars of hardworking people to enable this cruel, unnecessary industry that serves no national interests whatsoever. We can do better than this.

Please pass legislation to end horse slaughter and prevent horse slaughter plants from opening in the U.S. It’s time to ensure our horses get the protection they deserve.”