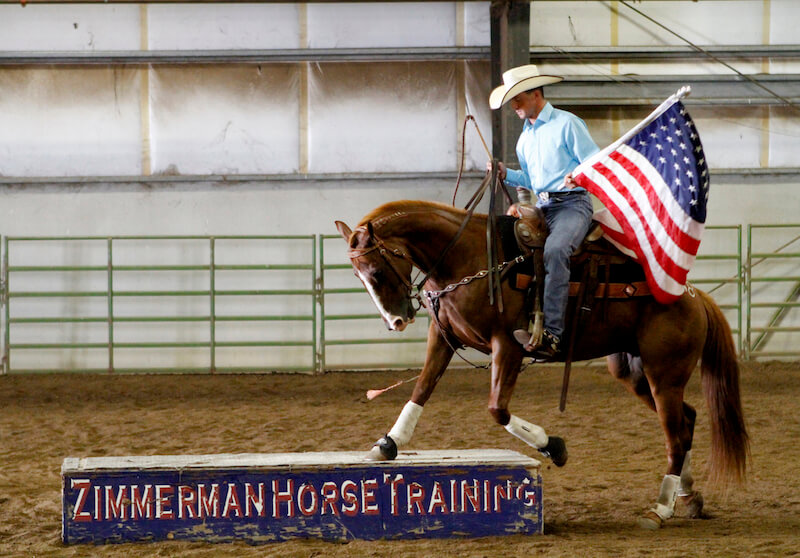 My Extreme Journey to the Mustang Makeover Challenge

Sometimes, a brush with death teaches you things about living you might not have learned otherwise. This is the story of how an extreme injury birthed an extreme dream…

August 8, 2011, was a normal day of work for me: accomplishing plenty, and just trying to be as effective as possible. It was 90 degrees and there was one horse left to ride, a bay gelding I decided to go easy with and teach to track a live calf. He was following the calf perfectly until it went close to the arena panels and stopped. When the bay gelding made a mistake and proceeded past the calf. I pulled the reins and said, “Whoa!”  The colt’s hindquarters sat down just like you want them to, but the bit pressure caused him to throw his head up into the air flipping him onto his back. I felt his hindquarter sit onto my left boot, pinning me down and the cantle of the saddle smashed my leg and pelvis. The horn hit me in the chest and I remember the sound of my ribs crushing as the horn punctured my chest cavity. At this point, the horse rolled away to the left and got up with me wrapped around the saddle horn. He took a few strides before I fell to the ground.

I sat there on the arena floor and could tell by the position of my legs that I had a broken femur, among other things. I could not help myself and yelled for Shane, a barn helper. He dialed 911 and a life flight helicopter soon arrived. Had the accident happened five minutes later, Shane would have been gone for the day and I would likely not be here today. Once I arrived at the hospital I was taken immediately into surgery to patch up the broken femur, my smashed pelvis, and the gaping hole in my chest. I had three major surgeries in four days. After my first surgery, I was placed on life support for the next 11 days. My health continued to decline and I had several close calls with death as my family prepared for the worst. On my seventh day of intensive care, I squeezed my wife’s hand showing everyone a glimpse of hope. Four days after that, I was taken off life support and could breathe on my own.

Rehab was expected to last a long time. Forget riding horses, I needed basic exercises to regain strength and just get back to normal. Instead of the extended rehab stay, however, I headed home after only four days in recovery. Doctors informed me I was not normal. At home I still had a long road ahead of me. It took six months before I thought of working again.

While recovering, I saw an ad for the Extreme Mustang Makeover event. It may sound crazy, but I signed up and got my horse on the 31st of March. I told my wife, “I don’t know if I’ll win it, but I’m going to make it really hard to beat me.” I had 90 days to condense as much training as possible into a small, athletic, filly named Diamond. The first time back in the saddle, however, my confidence was minimal. I thought, “I hope this horse don’t try anything, because I am at the mercy of this animal.” It was the first time in my life that I felt helpless if anything happened and I finally understood what some of my customers encounter. It made me appreciate the confidence that I possess and helps me teach others how to regain confidence.

I put a lot of time and energy into Diamond. When competition began the last weekend in June we placed 22nd out of 38 in round one, conformation and handling. Round two consisted of trail and we placed first, nine points ahead of second place. By combining rounds one and two, I ended up in first place. Round three was a pattern class and Diamond and I were tied for 1st place going into the finals round. The finals consisted of a compulsory round and a three and a half minute freestyle set to music.  At the end of the finals performance, each judge gave 30 points possible for horsemanship and also 30 point possible for artistic creativity. On the artistic scoring, I received a 27 and 29 from each judge, and on the horsemanship scoring, I received two 30’s. The freestyle scoring vaulted me to the top of the round and also gave me enough points to win the competition. The next day, Diamond went up for adoption. I purchased her and brought her home with me where she is now used for clinics and demonstrations.

I have learned many things throughout the accident, my time of recovery, and the competition. The first thing is to never cut a corner, no matter what you do. Whenever you cut a corner there is always a chance to get hurt. If I had warmed my horse up a little more or taught him to give vertically to bit pressure better before tracking that calf, the accident may not have happened. Second, is to never give up your dreams, no matter what happens. I always wanted to win an Extreme Mustang Makeover and I kept at it until I accomplished my goal. I always encourage everyone to give it all you’ve got, no matter what you do, and it will pay off in the end. And finally, I have learned that something good can come out of something bad. I could have been resentful or depressed about the accident, but I took the rehabilitation time to grow by learning new training methods and improving myself. These are three things that nearly dying taught me about living.

Matt Zimmerman lives in Adrian, Oregon with his wife Kelsey and his two daughters, Mesa and Mylie. Matt  received his bachelor degree in Agriculture Business Management from Oregon State University and currently trains horses full-time. He believes strongly in riding horses out of the arena, and utilizes the BLM ground which is right out his back-door. For more information about Matt visit https://zimht111.wordpress.com.

To watch Matt and Diamond’s winning performance at the Extreme Mustang Makeover find them on Youtube: https://www.youtube.com/watch?v=cUiUzTxo3Hs.